Rani Rampal has led the women's hockey team to a historic fourth-place finish at the Tokyo Olympics, helping them build a legacy 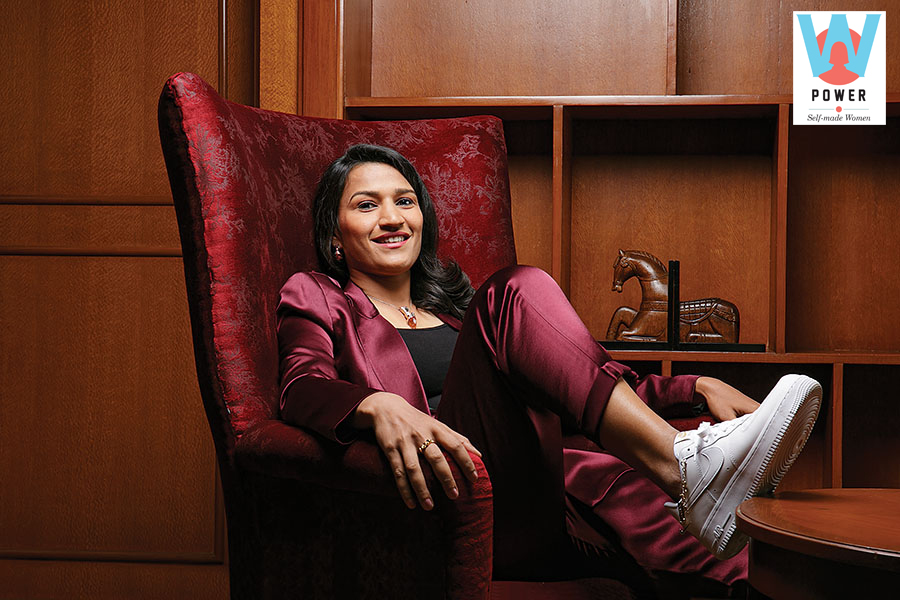 Rani Rampal doesn’t pause when asked if hockey was ever just a game for her. “Never,” she says. “I took it seriously right from the beginning and always wanted to make a name for myself.”

As a trainee at the Shahabad Hockey Academy, a nursery for women’s hockey in Haryana, the game began as an escape from abject poverty (her father was a cart-puller)—“I realised if I did well, it could change my life.” And now, for the captain of the women’s team that finished a historic fourth at the recent Tokyo Games, hockey is a pursuit of the Olympic motto of Citius, Altius, Fortius (faster, higher, stronger)—be it through that extra yard of sprint in practice, or leading the team from nowhere to within sniffing distance of a medal.

Rampal bares a mixed bag of emotions while talking about Tokyo. “It’s one of my biggest achievements, because finishing fourth in the Olympics isn’t easy. But it’s also one of my biggest disappointments,” says the 26-year-old. “I cried a lot after the defeat against Great Britain in the bronze-medal match. It’s not every day that you get such opportunities to win an Olympic medal.”

While she’s itching to resume her “unfinished agenda”, a podium finish at Paris 2024, Rampal and her team have already earmarked a chapter for themselves in India’s sporting history—for turning the spotlight on a sport that languished in the margins for decades, and giving it visibility like never before. Imagine disrupting the sleep cycle of a billion Indians who woke up at unearthly hours, usually a privilege accorded to cricket, just to watch the women’s team play. “That’s perhaps the biggest change for my sport that I have seen,” says Rampal.

From growing up in a restrictive milieu in Haryana where her parents were chided for letting a girl take up a sport to leading a team that stepped out of the shadows of their male counterparts in the recent Olympics, Rampal has been at the forefront of a changing social trajectory in sports. “The turning point for women’s hockey came with India’s qualification for the 2016 Rio Olympics after a 36-year hiatus. We finished 12th, but took away a lot of lessons, like how to handle pressure and match European teams in terms of physical fitness,” says Rampal. “There has been no looking back since.” 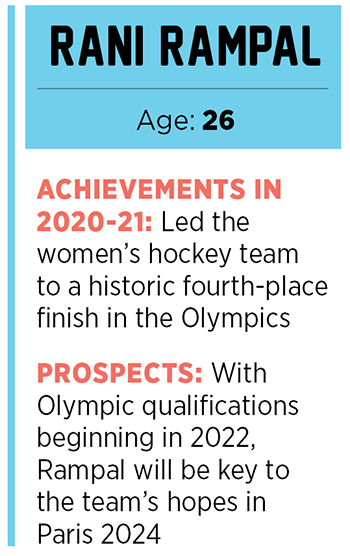 Two years after the Rio debacle came a silver medal at the 2018 Asian Games, but even their biggest advocates wouldn’t have predicted the fairytale that the women—most hailing from non-urban geographies and underprivileged backgrounds—would write in the Tokyo Games even without a medal. Rampal, who made her international debut in 2008, has strung this team together through the inevitable ups and downs, and led with example—from speaking out against casteist slurs hurled at teammate Vandana Katariya to being “early on the pitch, going for that extra gym session, and always pushing the team if they slack”, says Sjoerd Marijne, India’s coach during the Olympics. “If there was a below-par training session, Rani was the one stepping up and telling the team, ‘Come on girls, we really need to do better’.”

“If you watch her play, it’s clear she doesn’t just want to play a nice game, she wants to achieve something. When I arrived in India, I saw a lot of women who took up hockey just so that they could land a government job later. Rani was different, she wanted to create history,” adds Marijne.

The journey has been fraught with physical struggles with injuries as well as battling mental exhaustion during the months-long confinement in bio-bubbles. But even months of uncertainty, of whether the Olympics would take place at all, couldn’t douse Rampal’s hunger to win. “Right from my childhood, I hated losing. But you can’t just say you want to win, you have to work hard for it,” says the Khel Ratna and the Padma Shri awardee. “Every single day I train, I train to win. I’ve never enjoyed the proverbial ‘Saturday night’ because I sleep early to give my body enough time to recover and prepare for the next practice session. If you have to run 7 km in a match, you should try to run 10 km during practice.”

With Rampal being a household name now, we ask her if she gets mobbed for selfies and autographs. “Nahi nahi, utna bhi nahi,” she breaks into a giggle. “Hum cricketers toh nahi hai [not as much… we are not cricketers].” But if women’s hockey can build on the recognition and momentum that Rampal’s path-breaking team has brought for it, it’s only going to be a matter of time.