This architect and social entrepreneur has given every household in slums across seven Maharashtra cities a distinct digital address so that they can access basic services like clean water, safe sanitation and even doorstep delivery 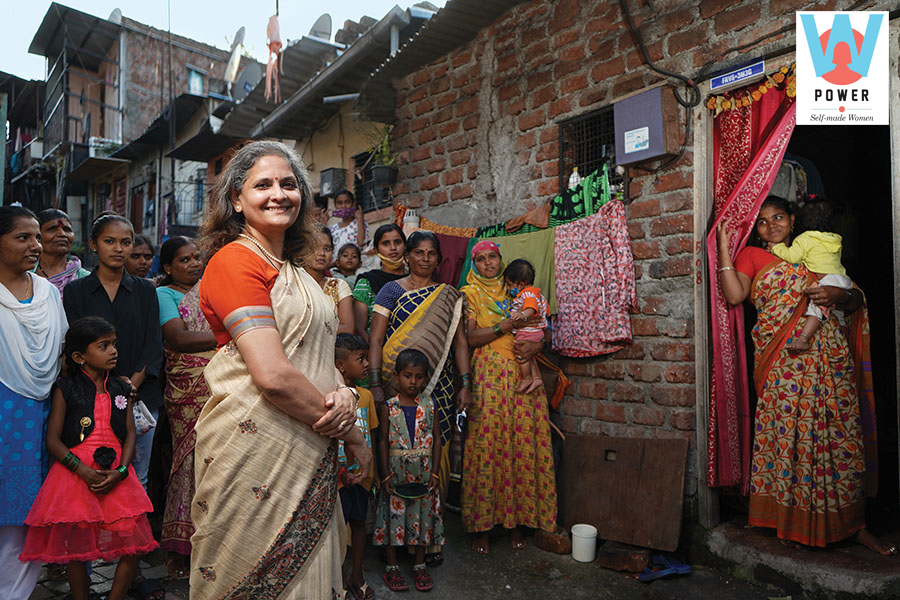 In a slum in Kolhapur, a city some 375 km south of Mumbai, a Swiggy delivery boy weaves his way through haphazard bylanes, past brick-lined shanties and makeshift homes held up by sticks and tarpaulin sheets. He reaches one such house with an alphanumeric code plastered on the front wall, much like a name plate. A young lady opens the door and takes delivery of the pizza she had ordered. “This was never possible earlier,” she says. “I would have to walk all the way to the entrance of the slum [a kilometre away] to pick up my parcel. It was such a hassle.”

The ‘plus codes’ are based on the latitudinal and longitudinal location of a place and are the work of Pune-based architect Pratima Joshi. She partnered with Google last year to provide these unique digital addresses to slum dwellers across seven cities in Maharashtra, including Navi Mumbai, Thane and Pune. “It’s a game changer for people living in the slums and also for the government,” she says. The former because they can access services at their doorsteps—groceries, medical supplies, ambulance services—all of which proved especially useful during the recent lockdowns. And the latter because providing access to services like sanitation facilities, gas cylinders and now vaccines is that much easier.

While providing digital addresses is Joshi’s most recent initiative, she and her team have been working to map and mark Maharashtra’s slums since the early 1990s. Joshi set up Shelter Associates, an NGO, soon after completing her architectural studies in 1993 to improve the living conditions of the urban poor. “Our focus was to give the poor better houses and with it access to electricity, water, sanitation etc. But there was no data in place, not even with the government. How could we even figure out what was lacking without proper data?” she says. 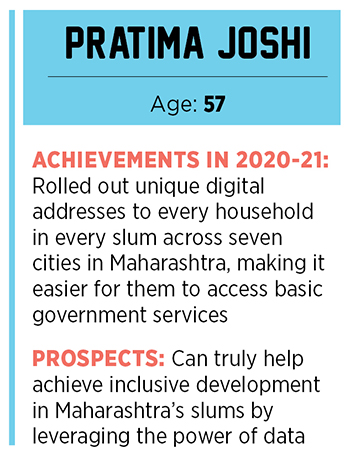 So the first task was to create data. Take the case of Pune. The city has around 450 settlements with 1.5 lakh households. The team began by taking maps of the city and marking out all the slum areas. They then went door to door to gather primary data and used table surveys–a method of mapping in which fieldwork and plotting is done simultaneously—to record their findings. Shelter Associates also trained the youth in the slums to collect data. Finally, the team spatially organised the data using GIS or geographical information system software so they could better analyse it. “It took us eight years to collect the first tranche of data from Pune,” recalls Joshi. When Google Earth technology became available in 2005, the team overlaid the data on the remote sensing imagery.

Then came the task of “querying” the data, says Joshi. “To our surprise, we found that—back in the early 2000s—water was not at all an issue in Pune’s slums. Almost 75 percent had piped water coming to their house, over 80 percent had access to electricity. But sanitation emerged as a critical gap with less than 28 percent having access to a home toilet.” That led her to launch the ‘One home, one toilet’ scheme in the mid-2000s—well before Prime Minister Narendra Modi’s Swachh Bharat initiative—wherein the government laid the necessary drainage lines, Shelter Associates provided the building materials, and the slum dwellers put in their own money to build the toilets. Subsequently, whichever city they worked in, sanitation emerged as a recurring issue. Today, thanks to Shelter Associates’ work, there has been a major swing in the percentage of the population that has home toilets: Pune has gone from 28 to 59 percent, Kolhapur from 26 to 66 percent, and Pimpri-Chinchwad from 9 percent to over 50 percent. “Pratima’s unwavering persistence in the face of adversity and her remarkable ability to influence a diverse set of stakeholders, be it donors, beneficiaries, government officials and staff, have led to her success,” says Vishal Jain, global chief service officer at insurance company Gallagher, who sits on the board of Shelter Associates.

Today as Joshi and her team undertake vaccination drives across slums, using the plus codes to monitor their progress, she is a mixed bag of emotions. “My dream is to try and give the most vulnerable in our cities a better quality of life. But there’s a limitation as to how much we can do. The government needs to show a willingness to institutionalise this data and leverage it for development,” she says. The plus codes, she says, can become a unique identity for every slum house to which all data sets are linked. So instead of different government departments working in silos, authorities can pool their data and draw from this one source. The Kolhapur Municipal Corporation is currently experimenting with this approach. If it works, Joshi hopes it can be rolled out across cities, because, as she says, only then will we have inclusive development.