Ukrainian President Volodymyr Zelensky created the trend by wearing khaki outfits in every setting since the beginning of the Russian invasion in February. In the eight months of the war, his people have followed his sartorial lead 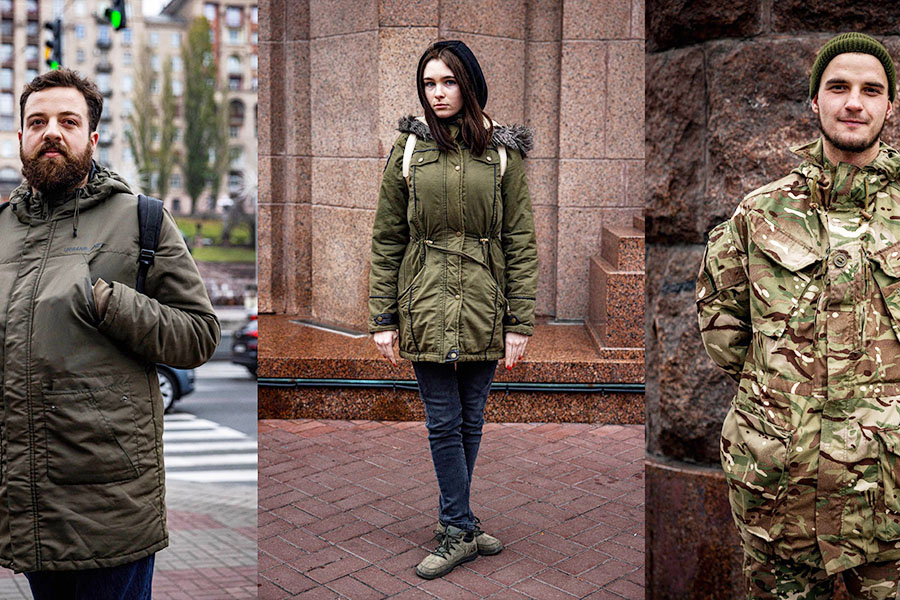 In Ukraine, which announced general mobilisation for men between 18 and 60 years old on February 25, army green has also been adopted en masse by civilians. Image: Dimitar Dilkoff / AFP

Ukrainian President Volodymyr Zelensky created the trend by wearing khaki outfits in every setting since the beginning of the Russian invasion in February.

In the eight months of war, his people have followed his sartorial lead.

Even civilians far from the frontlines have adopted their president's khaki dress code turned weapon of communication.

As Ukraine's army chief, Zelensky could wear the national military uniform, but he swapped his suits for more relaxed civilian outfits with military tones.

Since the first day of the war, he has been wearing olive t-shirts revealing his biceps, topped by khaki fleece on cold days, along with cargo trousers and sneakers in the same tones.

"They say: 'my country is fighting and I am wearing the same simple and convenient outfit as people who go down to underground shelters'," Solovey adds.

In the country that announced general mobilisation for men between 18 and 60 years old on February 25, army green has also been adopted en masse by civilians.

"Many people started wearing khaki, which is associated with our army, that way we don't forget what is going on and help, in our way," says 30-year-old Denys, walking in Kyiv in a khaki designer jacket.

The monochromatic trend invaded women's fashion too, from manicured fingertips to small accessories.

Svitlana, 62, chose a khaki tracksuit to go out to Kyiv's city centre because "our times require it."

"But not every day, that would be too repetitive," says the pensioner who livened up her outfit with a sleeveless candy-pink down jacket.

"Khaki has always been a popular colour in Ukraine, for casual and outerwear, but it's become more than just a style, it is the visual identity of an entire nation at war," Solovey says.

In front of the main post office in Kyiv, Natalya is wearing a full head-to-toe khaki look, from her cap to her tailored trousers and elegant quilted jacket.

She has been wearing that colour since the beginning of the war, in homage to her brother killed in combat in 2015 and to her husband, mobilised on the frontline.

"Camouflage is the only colour that makes me feel like I'm protected," the 42-year-old accountant says.

In the war-torn nation, most supermarkets have replaced the flowers or telephones on their stalls by military uniforms for conscripts or mobilised soldiers.

Ukrainian martial law prohibits civilians from wearing military uniforms or any outfit that could pass as such.

"I love this (khaki) colour, I also have loads of camouflage print outfits, but I avoid wearing them to avoid confusing people or inconveniencing our soldiers," said Anastasya Grebinichenko, a 15-year-old student who opted for black as her winter colour.

In Kyiv, the fashion line "Aviatsiya Halychyny" created at the beginning of the 2014 war has become widely popular for its t-shirts honouring the defenders of Mariupol or boasting anti-Russian messages.

The company donates some of its earnings to Ukrainian army brigades.

"Clothes are the simplest vector to express an opinion," says Natalya Kulyk, a brand manager.

"They show direct support to our army, they're a patriotic expression," adds Kulyk, who is wearing a "tactical-style" black outfit with a military-inspired fleece with pockets and herringbone pattern.

In Ukraine, fashion has become a tool and a political symbol since the 2004 orange revolution.

Then, citizens started wearing scarves and ribbons of the same clour to protest against Kremlin-backed oligarch Viktor Yanukovych.

After the pro-EU so-called Euromaidan protest wave in 2014, followed by the onset of conflict with Russia that same year, Ukrainian fashion took on overtly "patriotic" tones.

Many started wearing patches with the trident, the national emblem.

"As long as Russia repeats that there is no Ukrainian nation, language or identity, we will defend our culture and our heritage, it's just part of the battle," said Solovey.

Tweets by @forbesindia
Photo of the day: Stage is set
Our top reads of the week