The tiny underground stage and the minimalist set provides "a form of 'art therapy'" for the people who have stayed in Mykolaiv, Ukraine, and need something other than the grinding fear of war 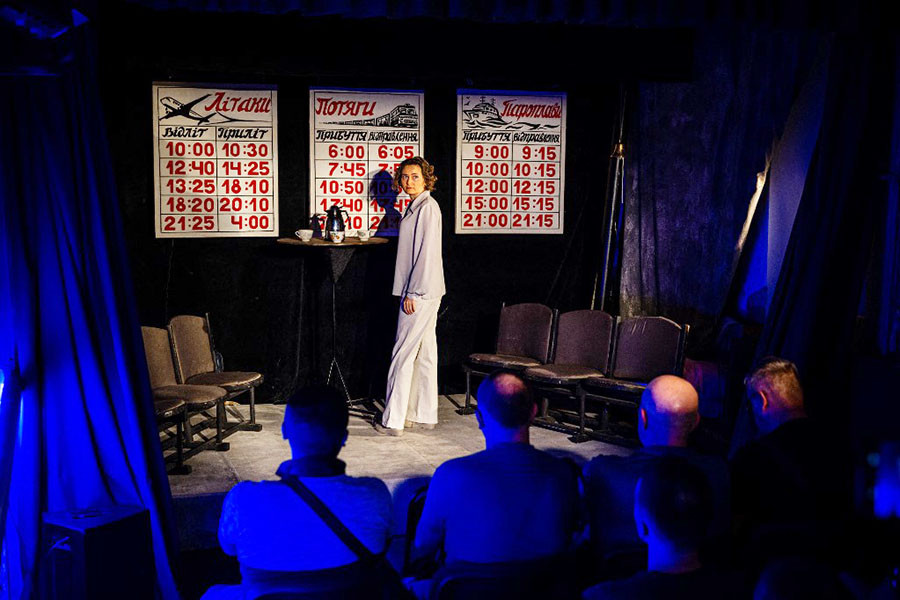 An actress performs at the Mykolaiv Drama Theatre for the first time since the start of the war in Mykolaiv on August 25, 2022. Image: Dimitar DILKOFF / AFP

Mykolaiv, Ukraine: It's an opening night like no other at Mykolaiv's theatre, with the audience ushered down into an underground shelter this week for the first performance since war broke out.
"We need this place to fight on the cultural front too," says artistic director Artiom Svytsoun.
The tiny underground stage and the minimalist set provides "a form of 'art therapy'" for the people who have stayed in Mykolaiv and need something other than the grinding fear of war.
Welcoming audience members, giving tours of the subterranean theatre and taking care of the myriad technical details, 41-year-old Svytsoun is the beating heart of the operation. He is the one who worked to get the theatre reopened in the relative safety of an underground bunker.
With the help of a European aid fund, his team took two months to transform a shelter four metres below ground into the 35-seat venue, its irregular white walls covered with a fresco reminiscent of classical theatres.

The strategic port city of Mykolaiv had a population of half a million souls before Russia invaded on February 24.
Now it bears the scars of the many bombardments it has endured almost daily for the past six months.
Three hundred metres (yards) from the elegant neo-classical building that houses the theatre stands the twisted concrete shell of the regional administration, which was hit by a missile on March 29 that killed 37 people.

According to the local town hall, the city has enjoyed just 25 attack-free days since February 24.
President Volodymyr Zelensky has said that, along with Kharkiv in the north and the eastern Donbas region, Mykolaiv is the most heavily bombed city in Ukraine, despite the fact that the front line is about 20 kilometres away.
The destruction has not been limited to military targets. Three universities were recently bombed and, according to regional authorities, 123 cultural institutions have been destroyed in the region since the fighting began.
Another effect of the invasion on the Mykolaiv theatre has been a name change.
The former Mykolaiv Russian Drama Theatre is now the Mykolaiv Theatre of Dramatic Arts.
In the tiny dressing room, its walls covered with photos of Soviet, Ukrainian and Hollywood actors, Kateryna Chernolishenko, 43, receives the final touches to her stage make-up and is in a good mood.
"I'm very happy to be back on our stage, back home, and I think it's important that art can be a support for people," says the actress, who like her fellow thespians volunteered to take part in this premiere.
Her colleague Marina Vassyleva, who is about to don a wedding dress, adds emphatically: "Actors, in these circumstances, are the doctors of the human soul."
"I see my mission and the meaning of my life right now. I am needed here in Mykolaiv," she says.

Since the start of the war, three of the theatre's actors have joined the army and another 20 percent of the troupe have taken refuge elsewhere in Ukraine, or abroad - a modest proportion in a town that has lost more than half its population, according to the town hall.
The company is used to playing in a 450-seater theatre.
Now the plays are being adapted and squeezed into the "stage in the shelter", as it is called.
Also read: Kyiv's nightlife is back after a prolonged silence
But despite the war, it is not just about performing patriotic works. After a curtain-raiser paying tribute to Ukraine, the first play of the new season, by a contemporary national author, is an absurdist play about "the realisation of our desires", says Svytsoun.
The bunker theatre will put on two shows a day, from Thursday to Sunday, much to the delight of theatregoer Olga Kroutchok. "I hope to come back every weekend. Theatre brings emotions to people in these times of war, and it makes our lives easier," said the 55-year-old.
Fellow audience member Oleksander Skotnikov, 42, agrees. "When we are under the bombs, as we are now, the theatre gives us a big smile and inspires people to keep on living".
By Thibault MARCHAND
© Agence France-Presse