Why war is spurring Ukrainian efforts to legalise same-sex marriages

Under Ukrainian Ministry of Defense regulations, the military must inform the parents and spouse or other close relatives of a soldier who is killed. But in a country that does not recognize gay marriage or even civil unions, none of that applies to a same-sex partner

By Maham Javaid and Dan Bilefsky 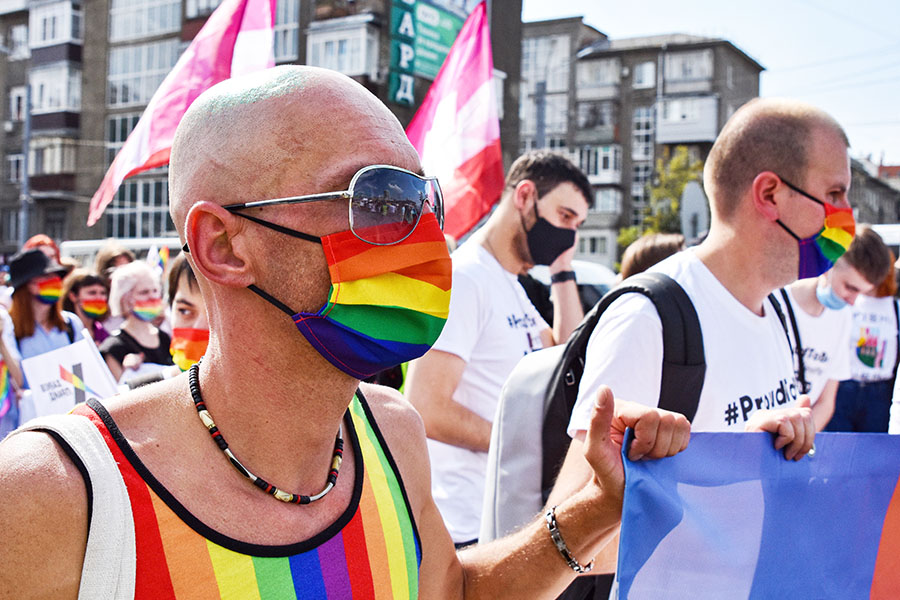 Like many people at war in Ukraine, Olexander Shadskykh, 23, a combat medic in the army, has been forced to grapple with his own mortality. But he also has another fear weighing on his mind: What if he is killed and his boyfriend doesn’t find out in time for his funeral?
Under Ukrainian Ministry of Defense regulations, the military must inform the parents and spouse or other close relatives of a soldier who is killed. But in a country that does not recognize gay marriage or even civil unions, none of that applies to a same-sex partner.
Shadskykh fears that if he doesn’t return home, his boyfriend, whom he asked be identified with only his given name, Vitalik, won’t learn about his death to say a final goodbye.
“My mother doesn’t know about Vitalik,” he said. “I want to tell her when I get home.”
Gay rights advocates said Shadskykh is one of hundreds — possibly thousands — of LGBT military recruits, facing a lack of legal rights for them and their partners that suddenly poses a palpable challenge in wartime. In Ukraine, they do not have the automatic right to visit a hospitalized partner, to share property ownership, to care for a deceased partner’s children, to claim the body of a partner killed in war or to collect death benefits from the state.
But the war is adding impetus to a drive to legalize gay marriage, with a petition recently reaching the desk of President Volodymyr Zelenskyy calling for same-sex partners to have the same rights as heterosexual couples, including the right to marry.
“At this time, every day can be the last,” says the petition, which has garnered nearly 30,000 signatures, enough to trigger a review by the president.

The petition’s author is Anastasia Sovenko, 24, an English teacher from Zaporizhzhia, in southern Ukraine, who identifies as bisexual. She said she felt compelled to draft the petition after reading an article about heterosexual soldiers rushing to marry their partners before heading to war, and feeling sad, angry and frustrated that same-sex couples did not have that option.
“They won’t be able to visit their soul mate in the hospital if something happens,” Sovenko said. “If they have a child, then the child will be taken from the parent who’s still alive if it’s not a mom who gave a birth. Because for the law they aren’t relatives. They are just two strangers. And this just could be the last one opportunity in their lives to get married.”
Zelenskyy can decline to act on the petition, or endorse it by drafting a gay rights bill and sending it for a vote in Parliament, where his governing Servant of the People Party has a sizable majority. He could also simply pass the issue on to Parliament for debate. Zelenskyy’s office did not respond to several requests for comment.
Any attempt to change the law faces a high barrier in Ukraine’s Constitution, which states that “marriage is based on the free consent of a woman and a man.” Amending the constitution requires a two-thirds vote of Parliament.
Gay rights advocates say they hope that Zelenskyy, a former comedian who has cast the war as a global fight for liberal democratic values and whose country recently became a candidate to join the European Union, will seize on marriage equality as an issue that can improve Ukraine’s liberal credentials and help push it closer to the West.
Inna Sovsun, a lecturer in public policy at the Kyiv School of Economics who is a lawmaker for Holos, an opposition liberal party that favors LGBT rights, said Parliament remained deeply divided over gay rights, with a majority undecided on the issue. But she said Zelenskyy might persuade skeptics if he spoke out forcefully in favor of a law.
Rights advocates said LGBT people in Ukraine routinely face discrimination, though not as widely as in Russia, and pride events in the country have been marred by threats and violence from anti-gay protesters and far-right groups.
Social attitudes have been changing in Ukraine, where homosexuality was decriminalized in 1991, but the extent of that change is unclear. Thousands danced on floats at last year’s Pride Parade in Kyiv. The gay rights movement was energized by the 2014 Maidan revolution, which ousted Ukraine’s pro-Moscow president and helped deepen ties between gay activists and other branches of civil society.
A telephone poll in May of 2,000 respondents by the Kyiv International Institute of Sociology showed that, over the past six years, the number of Ukrainians with a “negative view” of the LGBT community had decreased to 38% from about 60% . But a Pew Research Center survey in 2019 found that 69% of Ukrainians said society should not accept homosexuality.
Georgiy Mazurashu, a member of Parliament from Zelenskyy’s party who proposed the law against homosexual propaganda, said a majority of Ukrainians opposed same-sex marriage. He argued that gay rights legislation would send an “alarming signal for society and our traditional values.” Alluding to the war, he added, “We have a lot of other, incomparably more urgent and serious problems.”
But war and death are pushing the issue to the surface.
Oleksa Lungu, 22, said that one of the toughest decisions he had to ever make was whether to attend the funeral of Roman Tkachenko, 21, his former boyfriend, who was killed in battle in May near Kharkiv.
“How would I explain to his mother who I was? What was I doing there?” Lungu asked.
“How I knew Roman?”
In the end, he went to the funeral.
“We weren’t married, we weren’t even in a relationship, so of course I wasn’t expecting that I could have any kind of rights to his body,” said Lungu. “But I wanted to see him before he was buried forever.”