In recent months, the two sports manufacturers have doubled down on collaborations of all kinds with the luxury sector, with brands from Louis Vuitton to Gucci through Jacquemus and Balenciaga 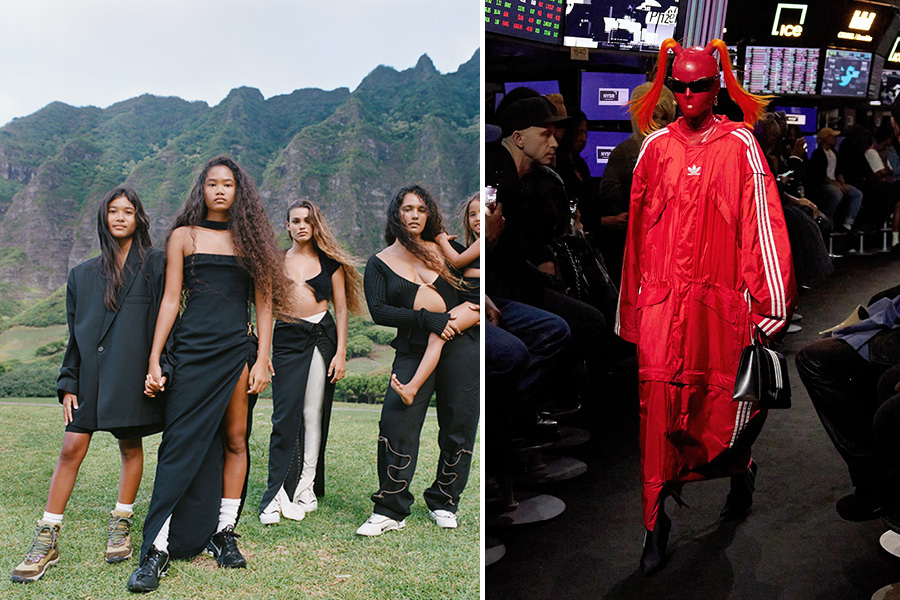 (L) The NikeXJacquemus collection and (R) the Balenciaga collaboration with adidas. Image: Courtesy Jacquemus and House of Balenciaga

The rivalry between sportswear giants Nike and adidas is nothing new, but it seems to be taking a new turn thanks to some of the world's biggest fashion houses. In recent months, the two sports manufacturers have doubled down on collaborations of all kinds with the luxury sector, with brands from Louis Vuitton to Gucci through Jacquemus and Balenciaga. All names at the cutting-edge of fashion, but also especially popular with young people, which suggests that, more than battling it out on style, it's a battle for the next viral hit that's now been launched!

Not a week goes by without a major luxury brand unveiling a new collection with a sports equipment manufacturer. And while Reebok, Puma and Kappa are among the brands exploring this lucrative field, it is Nike and adidas that are really setting the game's stakes. The phenomenon is such that the two sportswear giants seem to be playing a particularly fierce game of ping-pong, hitting back harder and harder with collaborations that are each more original, if not unique, than the next, taking luxury fashion to new heights of popularity along the way.

A winning shot from adidas

While it may have seemed like the ongoing battle between these eternal rivals would be played out in the metaverse, both having launched their own parallel universes within a few days of each other. However, it's in the luxury fashion industry—a sector that is far from their DNA—that they are now going head-to-head. And it's a match that promises to be very exciting if the collaborations presented in recent weeks are anything to go by... But now, adidas could have moved ahead of the game, announcing Sunday, May 22, a partnership with the world's most popular fashion house, Balenciaga.

When presenting the brand's spring 2023 collection in New York—featuring models in latex suits covering their faces—creative director Demna Gvasalia unveiled what could become THE collaboration of the year, between Balenciaga and adidas. It included a reinterpretation of the iconic Triple S, stamped for the occasion with adidas's iconic three stripes, but also T-shirts, track pants and jackets, tank tops, a strapless dress, and even baggy denim pants, also embellished with the signature three stripes.

And, hitting even harder for maximum impact, the two brands put the collection out to buy straight away, and only for a very limited time, since it will be available only until May 29. A guaranteed sell-out! However, hopefuls will have to put their hand in the wallet—and dig pretty deep—to bag one of these coveted pieces. A T-shirt retails for €595, a pair of sweatpants for €1,200, and €4,200 will buy you a leather hooded jacket—a real collector's item.

With this collaboration, the three stripe brand has secured a serious lead over its opponent, especially since it will be followed by the launch of another highly anticipated collection: the fruit of its partnership with Gucci, another fashion brand particularly popular with the younger generation. And if the collection has been the subject of some criticism in China, there's no doubt that it too will be snapped up quickly when it lands, June 7.

But the Swoosh brand hasn't said its last word, far from it. After lifting the veil on successful collaborations with Louis Vuitton and Sacai, Nike scored a hit by announcing a collection with one of the most prominent houses on social media: Jacquemus. If the fruit of this partnership has not yet been revealed in its entirety, it is known to focus on the American giant's vintage pieces and outdoor pursuits, with a bucket hat, cycling shorts, and a striking new version of the Humara shoe. All of this is set to land after adidas' successive launches, on June 28.

Links between the worlds of designer fashion and sportswear have been forging for a very long time, but this newfound and more than fruitful friendship seems to be at its peak today, bringing together audiences that were previously worlds apart, and simultaneously giving luxury fashion center stage on the street while putting sportswear on the most prestigious of catwalks.