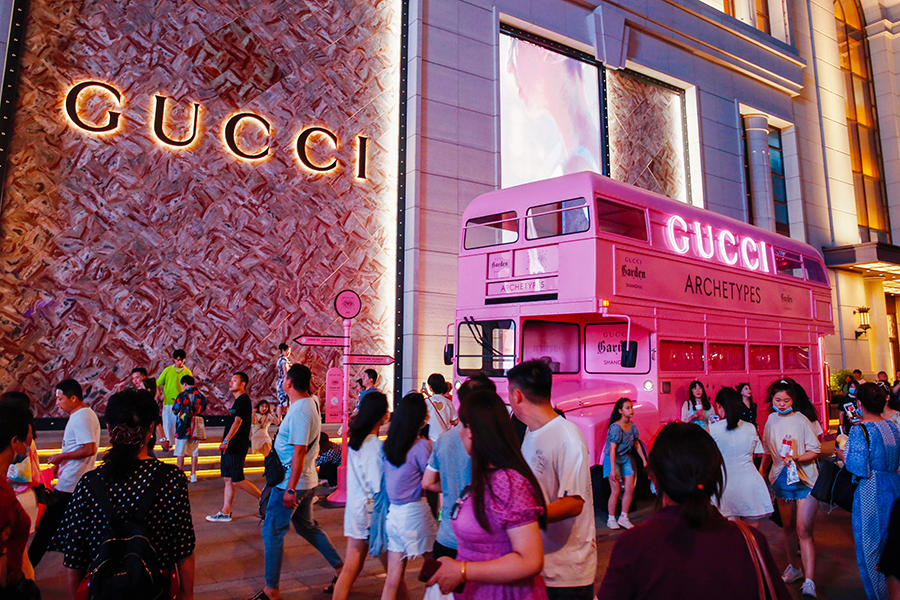 A GUCCI Retro Bus for fashion fans is seen in Shanghai, China, On July 21, 2021. The flashy car is also a mobile pavilion, part of an outdoor spin-off of the Gucci Originals exhibition currently being held at the Shanghai Exhibition Center. (Photo credit should read Costfoto/Barcroft Media via Getty Images)


If there's one sector that doesn't seem to be struggling, it's the market for counterfeit goods. It owes this robust economic health to the luxury sector, copying designer creations and selling fake versions at lower prices. Brands such as Louis Vuitton and Gucci are among the most sought-after names among consumers looking for fake products.

When it comes to counterfeiting, not all luxury brands are equal, it seems. A Uswitch study looked at the most popular brands among consumers of counterfeit goods. It turns out that the majority of counterfeit shoppers are looking to buy "Rolex" watches... at knockdown prices. In fact, each year, the term "fake Rolex" is searched online over 225,000 times.

And that's perhaps not surprising, given the high price of the genuine Swiss timepieces, ranging from around €5,000 for entry-level models to several tens of thousands of euros for collector pieces that are sometimes over 20 years old. Last year, a Daytona Paul Newman model in yellow gold sold for 663,000 Swiss francs (€618,162) at Christie's.

Louis Vuitton and Gucci also feature among the brands whose counterfeits are the most popular online, with 118,800 and 87,600 searches respectively. The rapper Kanye West's Yeezy brand of is also coveted by fashion fans who aren't too bothered about the authenticity of the items they wear (37,200 online searches).

From fakes to "fake fakes"

It's the same story for the Crocs brand and its iconic clogs. Once considered the height of uncool, these colorful shoes have made their way into the wardrobes of millions of consumers. And some don't hesitate to look for fakes online, as evidenced by the 25,200 annual searches reported in the study.

While some brands fall victim to counterfeiting more often than others, the same is true of specific products. For example, fake Gucci belts and sneakers generate the most searches online, followed by Kanye West's Yeezy Boost 350 sneakers.

These findings are consistent with a 2019 report from the Organisation for Economic Co-operation and Development (OECD) on the trade in counterfeit goods. This fraudulent market now represents 3.3% of world trade, and is dominated by shoes and clothing. Faced with this booming phenomenon, brands are responding in various ways. Some, like Supreme and Dior, have decided to parody counterfeiting by producing their own "fakes," turning the tables on those copying their designs.