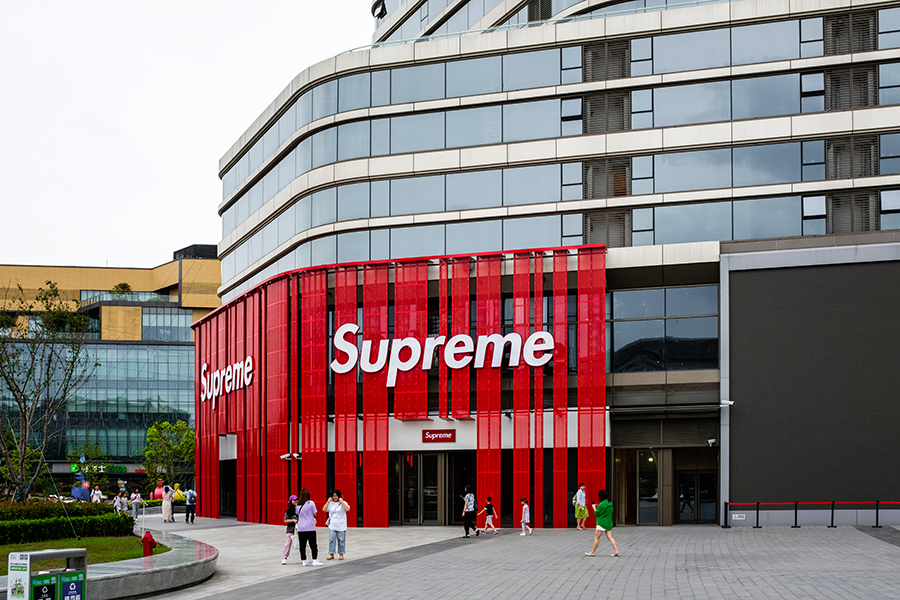 The Big Idea
How can a streetwear brand like Supreme — known for its outré, “collectible” pieces — get the capital to expand, while retaining the cachet to sell? Every hot youth brand faces this core dilemma: how to expand sales without diluting its “exclusive” appeal. Supreme’s case, however, is extreme because its identity is tied to ultra-small distribution and an aloof, “you chase us” marketing model.
The Scenario

Supreme, the streetwear brand known for its cherry red boxed logo, was founded in 1994 by James Jebbia. An avid consumer of street style, fashion magazines, and vintage apparel, Jebbia recognized early the creativity and style instincts of the skateboard community in New York. After honing his talents on a few skate and fashion retail ventures, he opened the Supreme store on Lafayette Street in the mid-1990s.

The Soho store quickly became a fashion darling, producing a magazine, artist collaborations (Jeff Koons, Damien Hirst), and a steady stream of limited-edition merch that it would “drop” on appointed dates. An obsessive fan base — known as Hypebeasts — would queue overnight outside the store to be among the first to purchase the new goods. Inventory was always sparse, and the kookier the item, the more enthralling. Supreme put its logo on red builder’s bricks, Rawlings baseball bats, subway tickets, airhorns and ashtrays — and heaps of screen-printed T-shirts.

The brand worked hard at not “trying hard.” They didn’t advertise, Jebbia rarely gave interviews, and if you signed up for brand email, you got sent … nothing. But like Banksy, the reclusive graffiti artist, the greater the mystery, the greater the momentum. Plus, Supreme collectors could make real money in resale. Websites like StockX, eBay and Grailed became venues to flip Supreme merchandise for far more than it had sold in stores. That $30 clay brick, for example, could fetch $150 or more. Sometimes there was a significant gap between perceived value and actual market worth — a hoodie from the Louis Vuitton x Supreme collaboration was optimistically listed at $12,000 on Stockx but fetched only a $1,400 bid.

Which begged the question: Could Supreme, now more than a quarter-century old, maintain its coyness and thus its coolness? How, exactly, could a brand — the core appeal of which lay in scarcity — actually grow?

The Resolution
Supreme chose a well-trod road to growth: It took on private equity investment. The Carlyle Group, one of the world’s largest private equity firms, bought half the streetwear company for $500 million in 2017. The partnership seemed to follow the usual fashion acquisition playbook by expanding distribution. Supreme opened a new store in late 2019 in San Francisco, on a (for them) quick timeframe.

Whether Carlyle would have pushed the brand too far, too fast, became an unresolved question when the COVID-19 pandemic hit. Supreme froze in time with 12 stores worldwide, a website and no wholesale. In July, after an extended closure of its stores, the brand held a rare online sale, up to 50 percent off tees, boxers and other gear, signaling some trouble.

Yet on 9 November 2020, the Carlyle Group sold its stake to VF Corp., one of Supreme’s biggest corporate fans and most frequent collaborators, for $2.1 billion. There was no discount in that transaction. In fact, the huge premium VF paid in a difficult economy caused observers to quip that The Carlyle Group was officially the most successful Supreme reseller of all time.

In some ways, the acquisition makes a ton of sense: VF has had a long and fruitful relationship with Supreme, producing collaborations for three of VF’s labels (North Face, Timberland and Vans). As well, the Denver-based conglomerate has managed iconic street-skate brand Vans through a long expansion, while keeping it a youth favorite. But Supreme trades in a more exclusive and edgy niche, apart from VF’s stable of accessibly priced, widely distributed brands.  How would Supreme’s fans feel about a large corporate owner that also hawked Kipling luggage?

Knowing this is the pivotal question, VF CEO Steve Rendle told fashion trade newspaper WWD he would take a light touch with Supreme. “This brand will continue to operate as it always has, we do not look to come in and make any changes. We’re here to help, support and enable.”

The Lesson
Though Wall Street analysts applauded VF’s deal and Jebbia said that VF would allow the brand to “maintain our unique culture and independence,” there will be pressure to produce, especially because VF is publicly traded. In order to make good on its investment, VF plans to double Supreme revenues within a few years, to $1 billion. The deal is structured so that Supreme leadership is heavily incentivized to meet performance targets. Will it mean more frequent merch drops, more stores outside the U.S., a broader range of categories? The answer is likely a resounding Yes on all counts.

Fashion is fickle. It has always been difficult for youth brands to stay hot while aging and expanding (see: the surfwear industry). The long-term COVID-19 impact remains a big unknown, but it’s safe to assume sporadic store closures, limited capacity and economic fallout will continue well into 2021. The pressure will be on the Supreme team to use its website, stay surprising, and make the merch good — very good.

A recent release: a Supreme North Face parka, with a giant belly “S” that’s reminiscent of the Pixar villain Syndrome. If villainous is on the mood board, that feels smart right now. Playing it safe would be the most dangerous thing Supreme could do.

The preceding is based on the case A Supreme Case of Coolness? (Darden Business Publishing) by Darden Professor Lalin Anik, Stephen E. Maiden and Addison Corriher.