As states roll out curfews and localised lockdowns, economic recovery, especially of the services sector, likely to be further deferred 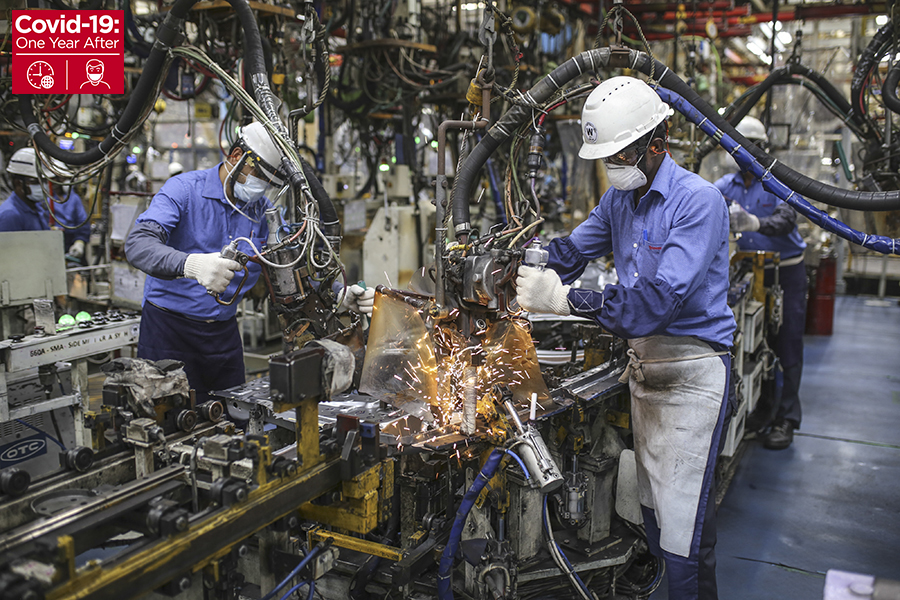 As India battles the second Covid wave, with Delhi, Maharashtra and some other states reporting record high daily numbers, economists on the street are currently concerned about the impact of the pandemic on the Indian economy. Most brokerages have started to indicate a downward skew. While no one has come out and cut projections massively, brokerages are indicating a stance of caution.

On April 18, the Kotak Economic Research team marginally revised its lower-than-consensus FY2022 gross domestic product (GDP) estimate to 10 percent and gross value added (GVA) to 8.7 percent. Its earlier projections stood at 10.5 percent and 9.5 percent, respectively. GDP and GVA are the health indicators of the country, while the former reflects the state of production, the latter provides a picture of demand and consumption.

One of the first states which started curtailing mobility was Maharashtra and Suvodeep Rakshit, senior economist at Kotak Institutional Equities, says it was an early indicator of how this may pan out across states. While he believes that short and partially-localised lockdowns are unlikely to severely distort the growth prospects, lessons from last year’s lockdown indicate that growth recovery will be prolonged and the recovery of the services sector will be further deferred.

Rakshit says, “If larger states by GDP were to initiate lockdowns similar to Maharashtra for 20-30 days, the GDP growth would be lower by around 100-150 basis points. We marginally reduce our lower-than-consensus growth estimates to factor in the second wave led by slower services sector recovery and the pace of vaccinations, and temporary dip in industrial sector and consumption demand (part of which will recover).”

The S&P BSE Index, which has rallied since the massive crash of March last year, managed to hit a peak of 52,152 points on February 15. Over the last fortnight, markets have been tapering off and on April 20 closed at 47,705.80 points, down 243.62 points or 0.51 percent for the day. The large companies on the index like Reliance Industries, Asian Paints, Kotak Bank, ICICI Bank shed their gains. 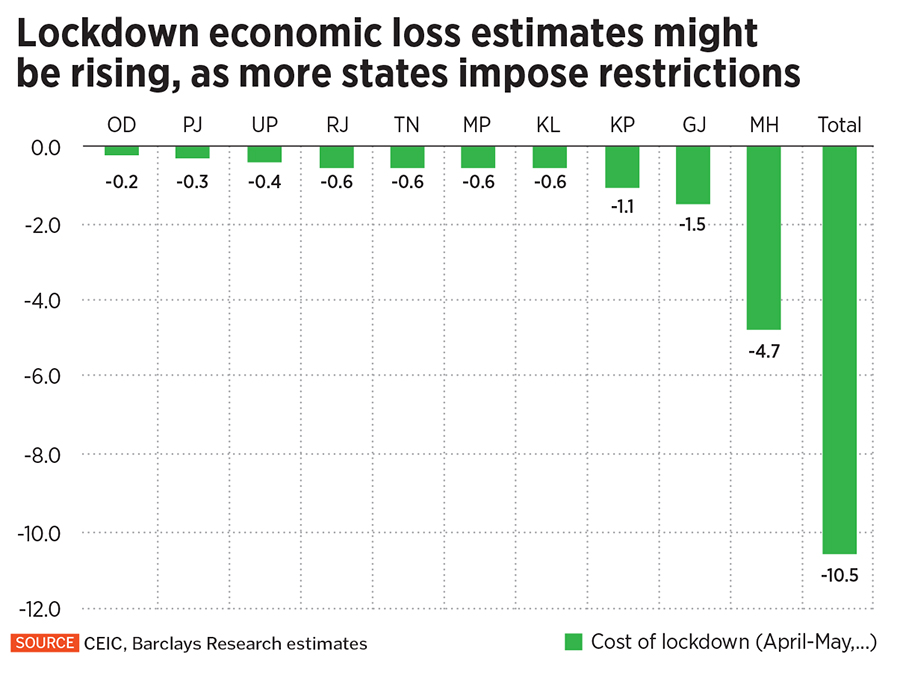 Apart from increasing infections, the country has witnessed shortage of vaccines. On April 20, the government announced it will provide a Rs 4,000 crore line to the two large vaccine manufacturers in India to ramp up its facilities. According to the government’s website, 124 million people have been vaccinated. The Centre has now liberalised its vaccine policy and from May 1 will open it up to anyone above 18 years. It is estimated that nearly 60 percent of India’s 1.38 billion population will be eligible for inoculation.  Rahul Bajoria, chief economist at Barclays, says the risks to near-term economic losses are rising, but a faster vaccination rollout, especially in key economic centres, can help reduce the impact. “For now, we continue to forecast GDP growth in FY 2021-22 of 11 percent, although we recognise the downside risks to our forecast,” he says.   Some of the states have started night curfews and restricted movement in various cities across the country. Even in his speech on April 20, Prime Minister Narendra Modi has asked state governments to look at lockdowns as a last resort. But Japanese brokerage Nomura has said The Nomura India Business Resumption Index (NIBRI) has seen a 16-percentage point drop from last week indicating a slowdown in business and economic activity. These are the same levels seen in end-October. The report adds that the economy dipped to 83.8 for the week ended April 18, compared to 88.4, a week earlier. It expects a loss of sequential momentum in Q2 2021, but once the second wave passes, which they assume will happen between July and September, Nomura expects a release of pent-up demand in the subsequent quarters.  In a recent report, ratings agency Crisil Ratings said the sharp rise in Covid-19 cases since mid-February and the impact of any stringent containment measures on businesses are the key threats to the nascent demand recovery and could impact the credit quality outlook adversely. According to them, their recent resilience study of 42 companies indicates that only six are highly sensitive to a Covid-19 resurgence, while 20 are moderately sensitive. Among the highly-sensitive sectors, airlines, airport operators, hospitality and retail have a long road to recovery while a few segments like gems and jewellery, and automotive dealers have benefitted so far as they have managed to break free from the suppressed demand scenario.

Tweets by @forbesindia
Coal is set to roar back, and so are its climate risks
A year after lockdown: Muthoot Microfin Ltd continues to drive inclusion through technology & trust