"It's going to cost a lot more for people that don't have good health care or just the poor" to get an abortion, Linda Coffee, the last surviving member of the legal team who won the case in 1973, said 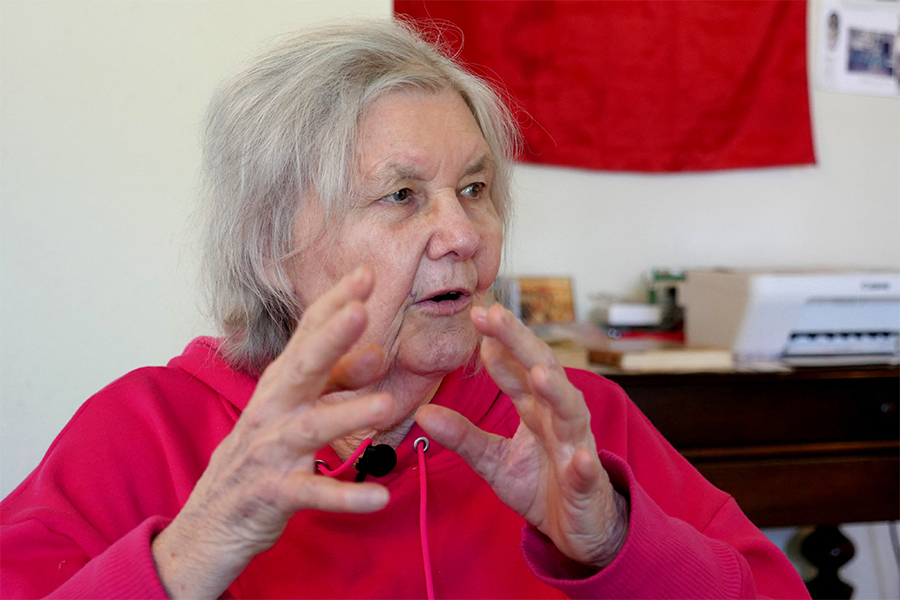 US attorney Linda Coffee speaks during an interview in their home in Mineola, Texas, on May 6, 2022. The leak of a US Supreme Court draft ruling that would seemingly overturn the landmark Roe v. Wade decision securing a nationwide right to abortion has sparked widespread outrage—but attorney Linda Coffee is especially miffed. Coffee is the last living member of the legal team who won the case in 1973. (Credits: FRANCOIS PICARD / AFP)

Mineola, United States: The leak of a US Supreme Court draft ruling that would seemingly overturn the landmark Roe v. Wade decision securing a nationwide right to abortion has sparked widespread outrage—but attorney Linda Coffee is especially miffed.
Coffee is the last living member of the legal team who won the case in 1973.
"I think that's going to be awful" if the Supreme Court ultimately adopts the draft opinion published by Politico last week, the 79-year-old said in an interview with AFP at her home in Texas.
"It's going to cost a lot more for people that don't have good health care or just the poor" to get an abortion, said Coffee, sitting in her wheelchair.
"They can't go to another state," she noted. "A lot of people can't afford the airplane."
Millions of American women could find themselves hundreds or even thousands of miles away from the nearest medical center performing abortions, if the Supreme Court reverses Roe v. Wade.

"I think a very large percentage of people favor retaining some form of Roe versus Wade," said Coffee, who added that "a smaller balance—of course, they're very vocal—they don't want anything."
According to a May 2021 study from the Pew Research Center, 59 percent of Americans believe abortion should remain legal in all or a majority of cases.
If Roe v. Wade is overturned, it will be up to each state to decide whether or not to allow abortions—and how to set the conditions.
In that case, 26 states would be "certain or likely" to ban abortions, according to the Guttmacher Institute, a US think tank that supports abortion rights.

Coffee was 27 years old when, in 1970, she officially filed the Roe v. Wade case in a Dallas court.
She had developed a legal argument that her client, a woman who wanted an abortion after getting pregnant at age 21, had her constitutional right to "privacy" violated by a Texas law that banned the procedure in most cases.
Poor and suffering from problems with addiction, Norma McCorvey said she did not have the means to travel out-of-state for an abortion.
After meeting Coffee and her legal partner Sarah Weddington, McCorvey eventually agreed to be the plaintiff, under the pseudonym "Jane Roe," in a challenge to the Texas ban, which was formally filed against Henry Wade, the Dallas County district attorney.
Nearly 50 years later, Coffee continues to receive notes from students, activists and journalists who want to know more details about the legal battle at the heart of the abortion debate in America.
She adds their letters to her personal collection, which includes the quill pens she received for appearing before the Supreme Court—a time-honored tradition—and newspaper articles about abortion or her co-counsel Sarah Weddington, who died last year at the age of 76.
"I'd sometimes get calls from people in South Dakota, or you know, even in Canada... Most of them didn't know that Jane Roe never had an abortion!" said Coffee, with a chuckle.
In fact, the "Roe" case took three years to work its way through the courts—so by the time the Supreme Court issued its final decision, in January 1973, Norma McCorvey had already given birth to her child, which she gave away through adoption, like her two previous children.

Weddington would go on to serve in politics, but Coffee remained largely out of the limelight—continuing to practice law in Texas, but specializing in bankruptcies and divorces.
When she eventually retired, Coffee moved to the small town of Mineola, two hours east of Dallas, where she still lives.
"Linda doesn't call attention to herself," explained Rebecca Hartt, Coffee's partner of 38 years. "She's very shy," she added.
The last few years have been difficult for Coffee: after she was hospitalized in intensive care for 241 days with encephalitis, she broke her hip last summer.
The couple also lives without running water inside their home, because they could not afford the few thousand dollars needed to repair pipes that burst in Texas's extreme cold snap in February 2021.
Coffee's cousin Richard Stafford says that she has multiple projects in the works that "should help her get out of this difficult situation."
"A film documentary and scripted limited series movie" are being negotiated with producers, said Stafford, a journalism professor at the University of Georgia.
He also hopes to publish a memoir based on Coffee's experiences preparing and arguing the Roe v. Wade case.
By François PICARD
© Agence France-Presse