Over a year ago, he nearly quit. Now, thanks to COVID-19, entrepreneur Rajeev Karwal has got a fresh breath of life 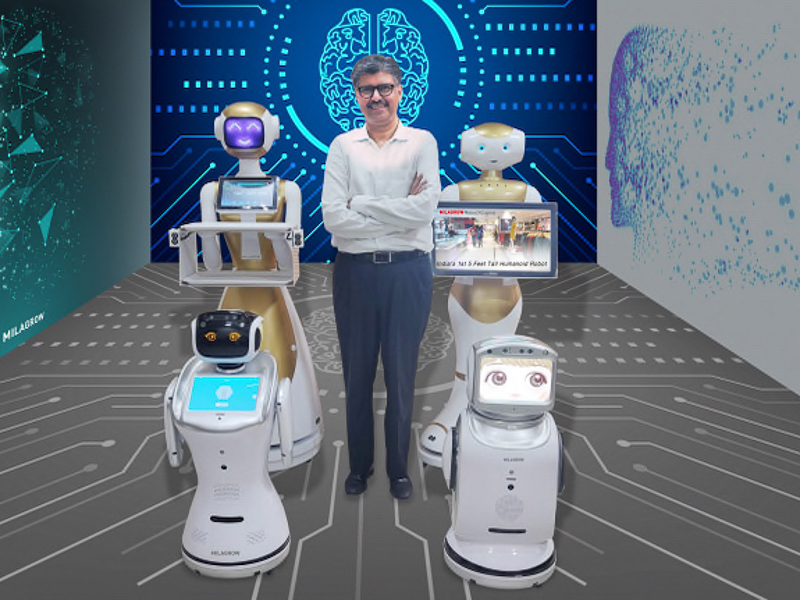 Hundreds of companies in India were forced to shut down because of COVID-19. By one estimate, done by FICCI, 12 percent of start-ups alone closed down during the past eight months. The impact on the rest of the MSMEs is similar.

But Rajeev Karwal is one of the few entrepreneurs who found a saviour in the pandemic. "In the last quarter, our revenue grew by 723 percent, year-on-year. For the full year, we expect revenues to jump five times," says the founder of Milagrow Humantech.

How did the spectacular turnaround happen? Not just for the company, but also for Karwal, who just a little over a year ago, was thinking of quitting?

By 2019, Rajeev Karwal was on the verge of calling it quits. His 12-year-old foray into entrepreneurship, after an immensely successful stint as a professional, seemed to be heading towards an embarrassing failure.

Not that his idea had turned sour. In 2012, Milagrow Humantech seemed to have made a successful transition from being a management consultancy to becoming a leading player in India in making robots for residential and industrial use.

The growth may have been slow. But by Karwal's own admission, he was not in the game to make a quick buck. He had already tasted success at the top, after being part of the senior management of leading electronics brands such as Onida, LG, Philips and Electrolux.

"I wanted to now build an institution that will last 100 years," explains Karwal, of becoming an entrepreneur.

But two blows, one after the other, dented that dream. First came the Goods and Service Tax, or GST. Milagrow's robots were put under the 28 percent category. The additional tax made the robots, already selling at a high price, even costlier.

Second, was the demonetisation in 2017. "Most of our customers used to pay by cash. Robots were a discretionary product and most of the buyers - who would buy on Amazon, Flipkart or directly from our website - preferred cash on delivery. With demonetisation, we were severely impacted," recounts the industry veteran.

There was something else too.

Karwal had strictly told his team on the ground that the company will go by the rules, and will not pay 'extra' to clear consignments or push files. But it was not easy. Matters came to head when an important consignment was stuck at a port, and by the time the company took the case to courts, won it and finally received the important parts of its products, Diwali had come and gone.

"We had missed the peak festival time...nothing was going the right way. I was not in a good mental state," says Karwal. The stress was showing on the business.

The company had consistently grown till then. It clocked a revenue of Rs 5 crore in 2014, and that increased to Rs 12 crore in 2017 financial year. But demonetisation, GST and the difficulties of working on the ground, dragged the topline down to Rs 3 crore in the 2019 financial year. It was nowhere close to the Rs 30 crore target that Karwal had set for Milagrow to reach by 2019.

But Karwal, drawing on his experience, decided to give one more shot. "I analysed to see if I had done anything wrong. I analysed our customers and found that they were happy. About 45 percent of them owned two of our products," he says. Worldwide, from the US to China, robots were taking off.

Heartened, Karwal and his team re-imagined the business by mid-2019. Their focus was more on clients from hospitality and facilities management sectors. The company's floor cleaning robots in particular became popular.

"The market just went through the roof," says Karwal. First demand from retail customers, especially for the floor cleaning robot zoomed, as people started working from home, and house help could no longer come over.

And demand from facilities management companies, who were responsible for keeping commercial offices, industrial facilities and hospitals clean, also shot up.

The growth in demand for floor cleaning robots has been especially telling. The overall segment sold about 10,000 units the whole of last year.

"This year, we expect the numbers to cross one lakh. If not with the problem with China and logistics bottlenecks at ports and airports, I reckon the numbers would have touched three lakh," says Karwal. Much of the parts for robots come from China. Overall, 80 percent of the components come from overseas.

The Milagrow founder now hopes to end the year with a topline of Rs 15 crore, its best showing since inception.

Can Milagrow keep growing in the same pace in the next few years?

While the company has been successful in its niche business, industry insiders are of the view that it has to diversify soon to stay relevant in the market.

"The business model needs to be revisited. They cater to a high-income group and not to the masses. It will be tough to sustain unless they can enter the mass market category," said an industry veteran and consumer appliance head at a rival firm. He declined to be named.

A senior vice president at a global appliance firm explained that most of the specialised cleaning robots by Milagrow are priced upwards of Rs 20,000 and hence may not have a high visibility in the market.

"All said and done, robots are cool to have at home but are an expensive buy. The reality is that a large proportion of the Indian population prefers to have standard tools of cleaning and even if they opt for a robot would choose a product priced below Rs 5,000. Hence Milagrow needs a far aggressive approach for this lower-income segment to be sustainable," he added.

Similarly, competitors are also of the view that while Milagrow may be among the few companies offering educational robots, the pricing is very restrictive.

"Parents won't be able to afford a Rs 40,000 robot for a child even if it is for advanced concepts like programming. It is still a very niche market that they are operating in and would need to diversify to be in the business," said the head of sales at an electronics goods firm.

Karwal is mindful of the challenges. Milagrow is in the process of launching more products. Some of its dusting robots come with a price tag of less than Rs 10,000. Can he now push it further down?

For someone who is credited to be one of the factors behind the success of LG in India, or turned around Electrolux Kelvinator, Karwal surely knows what lays ahead.