Last week, a deadline to make an $83 million payment to foreign investors came and went with no indication that Evergrande had met its obligations, raising questions about what would happen if its huge debt load went sour 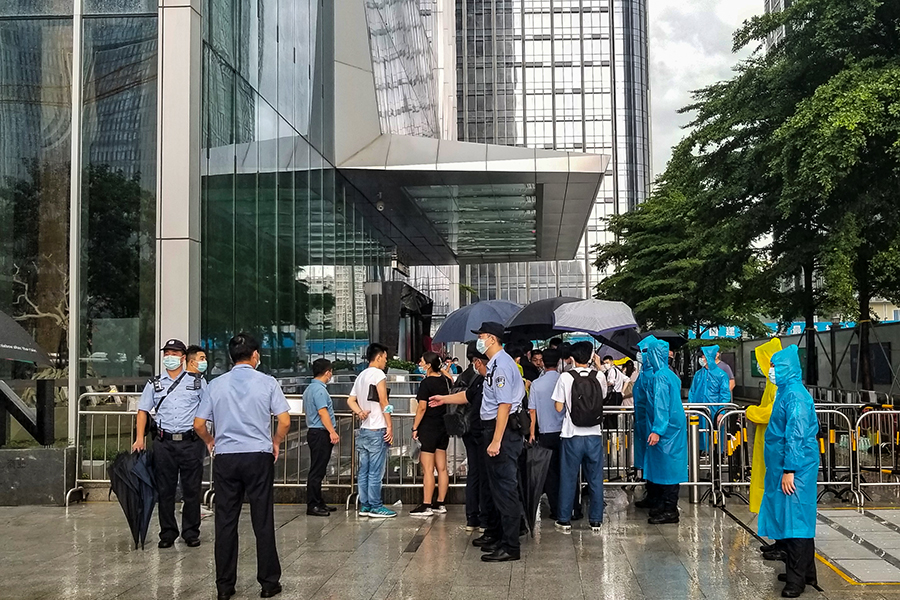 Police officers and security guards stand in front of the barricaded entrance to the China Evergrande Group headquarters in Shenzhen, China. Evergrande is facing mounting protests by homebuyers, retail investors and even its own employees, raising the stakes for authorities in Beijing as they try to prevent the property giants debt crisis from sparking social unrest. Source: Bloomberg/ Contributor/Getty Images

BEIJING — In any other country, the sudden collapse of a corporate titan with more than $300 billion in debt would send shock waves across the economy. Headlines would blare. Banks would shudder. Investors would panic.

A corporate collapse of that scale may happen soon. But it would be in China, where the Communist Party keeps a firm grip on money, corporate boardrooms, the media and the broader society. Those controls may be facing one of their toughest tests yet, but Beijing is signaling that it feels up to the challenge — even if it will first try to teach big investors and companies a bitter lesson about lending recklessly.

The financial world is watching the struggles of China Evergrande Group, one of the largest property developers on Earth and certainly the most indebted. Last week, a deadline to make an $83 million payment to foreign investors came and went with no indication that Evergrande had met its obligations, raising questions about what would happen if its huge debt load went sour.

The Chinese government does not want to move in yet because it hopes Evergrande’s struggles will show other Chinese companies that they need to be disciplined in their finances, say people with knowledge of its deliberations who insisted on anonymity. But it has an array of financial tools that it believes are strong enough to stem a financial panic if matters worsen.

The government is “still going to provide a guarantee” for much of Evergrande’s activities, said Zhu Ning, deputy dean of the Shanghai Advanced Institute of Finance, “but the investors are going to have to sweat.”

Authorities have other ways to quell public unease about Evergrande. For months, local governments have been issuing directives urging Communist Party officials and companies to look out for budding protests related to China’s troubled property developers. Some notices warn officials to monitor aggrieved homebuyers, unpaid contractors and even laid-off real estate salespeople.

“Follow the demand to spot them early, defuse early, control early and deal with early,” the housing department of Lingshan County in southern China said in a directive about possible protests earlier this year. “The heads of property development firms must personally take in hand the work of dealing with petitions and maintaining stability.”

Censorship of the press and social media makes it hard for the general public to know about the extent of Evergrande’s troubles and for Evergrande homebuyers and investors to organize.

“The government can place them under watch and pressure them through their employers or relatives not to make trouble,” said Minxin Pei, a professor of government at Claremont McKenna College in California who is writing a study of China’s domestic security apparatus.

China has a lot riding on its ability to contain the fallout from an Evergrande collapse. After Xi Jinping, China’s most powerful leader in generations, began his second term in 2017, he identified reining in financial risk as one of the “great battles” for his administration. As he approaches a likely third term in power that would start next year, it could be politically damaging if his government were to mismanage Evergrande.

But China’s problem may be that it controls financial panics too well. Economists inside and outside the country argue that its safeguards have coddled Chinese investors, leaving them too willing to lend money to large companies with weak prospects for repaying it. Over the longer term, though, China’s bigger risk may be that it follows in the footsteps of Japan, which saw years of economic stagnation under the weight of huge debt and slow, unproductive companies.

By not forcefully signaling an Evergrande bailout, the Chinese government is essentially trying to force both investors and Chinese companies to stop channeling money to risky, heavily indebted companies. Yet that approach carries risks, especially if a disorderly collapse upsets China’s legions of homebuyers or unnerves potential investors in the property market.

An abrupt default by Evergrande on a wide range of debts “would be a useful catalyst for market discipline but could also sour both domestic and foreign investor sentiment,” said Eswar Prasad, an economics professor at Cornell University who is a former head of the China division at the International Monetary Fund.

Some global investors worry that Evergrande’s problems represent a “Lehman moment,” a reference to the 2008 collapse of the Lehman Bros. investment bank, which heralded the global financial crisis. Evergrande’s collapse, they warn, could expose other debt problems in China and hit foreign investors, who hold considerable amounts of Evergrande debt, and other property developers in the country.

Chinese officials believe they have the situation under control.

For starters, Beijing controls the country’s banking system to a degree that goes far beyond bank regulations in the West. The major lenders are state-owned companies that prioritize the government’s economic policy over their own bottom lines. Rather than demand repayment, China’s banks have negotiated opaque deals with Evergrande for months.

Control of the banks also gives Beijing access to their vast ocean of money from the country’s deposits, providing a thick financial cushion.

China also strictly controls the movement of money across its borders. Chinese and global investors cannot suddenly head for the exits if they get worried. Those controls helped insulate China from an Asian financial crisis in 1997 and 1998 that heavily damaged other regional economies.

Finally, the Communist Party firmly controls the courts, so any effort to force Evergrande into bankruptcy and take it apart would need approval from top leaders. So authorities can avoid a rushed sell-off, like Lehman’s in 2008, that could result in fire-sale prices for Evergrande’s land, apartments and other collateral, along with huge layoffs.

The Chinese government is convinced that, with a properly managed restructuring, Evergrande has enough assets to cover a sizable majority of the company’s debts, said people familiar with Chinese economic policymaking. Officials have already calmly overseen the dismemberment of Anbang and HNA, two debt-laden empires, and forced the shrinkage of a third, Dalian Wanda.

State influence over major companies can help with that process. Some combination of the country’s biggest state-owned real estate and construction companies could step in to complete Evergrande’s roughly 800 unfinished complexes and pay off contractors. Officials see that as one of the benefits of the state sector’s expansion under Xi, which the party has promoted as an effort to make sure the economic benefits of China’s growth are broadly shared.

“The state-owned enterprises will make sure the apartments are delivered, to avoid social instability,” Zhu said.

The Chinese government has much less sympathy for foreign and large domestic investors, who are sophisticated and should know the risks, said people familiar with Chinese economic policymaking.

Chinese leaders can also supplement their financial tools by managing public perception and response. Ever since the construction industry became a mainstay of China’s economy in the 1990s, disputes between home purchasers and developers have led to protests. Homebuyers, who often purchase their apartments before they are built, have tried to unite over complaints about shoddy workmanship and unfilled promises.

This month, for example, hundreds of homebuyers in Jingdezhen, a ceramics-making city in southern China, organized protests over fears that Evergrande would collapse before it finished handing over legal ownership of their apartments.

Authorities responded quickly. After the protests in Jingdezhen, a social media page operated by a nearby county government carried warnings that the homebuyers could be arrested for demonstrating. It suggested that Evergrande would survive but that its managers would be held to account. “People and businesses that go back on their word will certainly receive their deserved punishment,” read an article on the page.

Such steps can douse unrest. But it could be harder to restore confidence eroded by an Evergrande default, said Pei of Claremont McKenna.

“The economic impact is impossible to contain with a show of physical force because the impact will work through consumer confidence and micro-level decisions made by millions” of businesses, he said. “That’s a far tougher challenge that would require adroit economic policy responses.”

Tweets by @forbesindia
A nation transformed in 16 years of Angela Merkel begins to move on
Corporate governance at India Inc: Understanding the decadal shift