France has clung to its past as a great power, still seeing itself as having global interests partly because of territorial possessions in the Indo-Pacific and the Caribbean 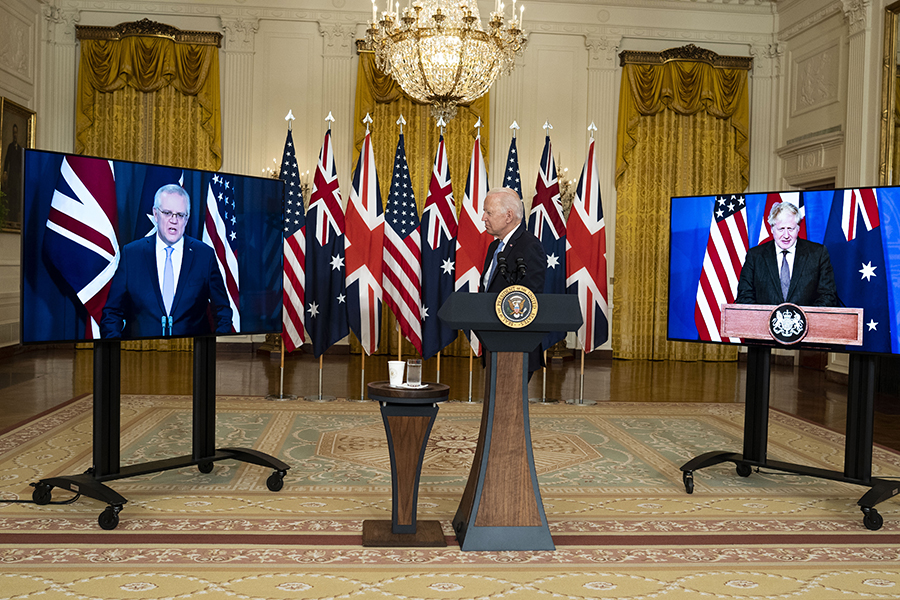 President Joe Biden, participates in a videoconference with Prime Minister Scott Morrison of Australia, left, and Prime Minister Boris Johnson of the United Kingdom, from the White House in Washington on Wednesday, Sept. 15, 2021. The United States and Australia went to extraordinary lengths to keep Paris in the dark as they secretly negotiated a plan to build nuclear submarines, scuttling France’s largest defense contract.
Image: Doug Mills/The New York Times
PARIS — Beneath France’s angry outbursts about a secretive “knife-in-the-back” U.S. deal to provide nuclear-powered submarines to Australia lay a single question that, as the French say, put the finger where it hurts.
After much tiptoeing in France around the issue, the newspaper L’Opinion asked at the top of its front page a question familiar to anybody who knows “Snow White.”
“Mirror, mirror on the wall, tell me if I’m still a great power?’’
Europe is speckled with fading former imperial powers. But France has clung more than most to its past as a great power, still seeing itself as having global interests partly because of territorial possessions in the Indo-Pacific and the Caribbean. Imbued with a sense of grandeur, France harks back to the Enlightenment to speak about fighting obscurantism in the world today and proffers its secular universalism as a model for modern societies. It often punches above its geopolitical weight, although it also overreaches.

Tweets by @forbes_india
Photo of the day: New record
Video streaming, social media take up most of the world's Internet bandwidth