After years of casting doubt on climate change and attacking politicians who favoured corrective action, Rupert Murdoch's media outlets in his native Australia are planning an editorial campaign next month advocating a carbon-neutral future 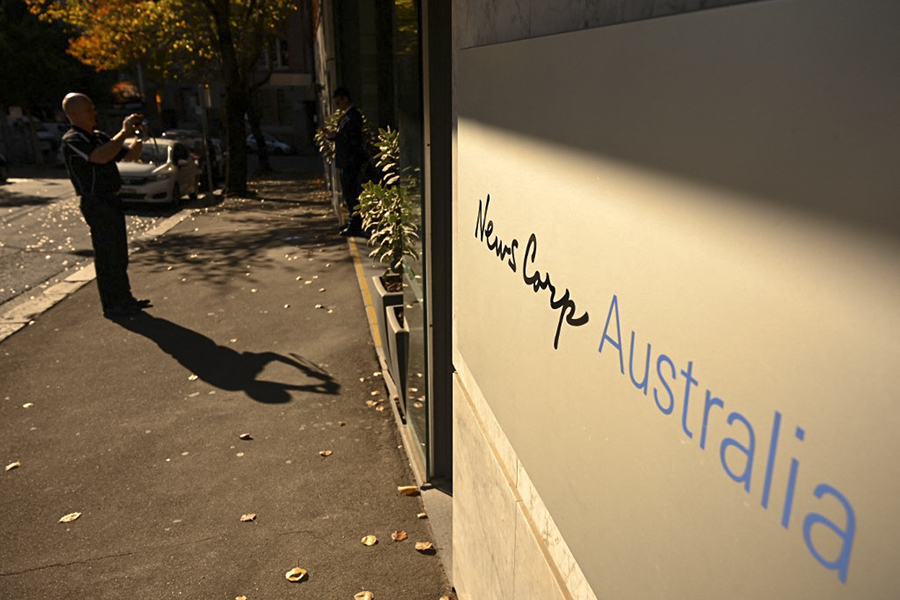 Depending on its content, the project, described by executives at Murdoch’s News Corp. on Monday, could be a breakthrough that provides political cover for Australia’s conservative government to end its refusal to set ambitious emission targets
Image: Peter Parks / AFP

After years of casting doubt on climate change and attacking politicians who favored corrective action, Rupert Murdoch’s media outlets in his native Australia are planning an editorial campaign next month advocating a carbon-neutral future.

Depending on its content, the project, described by executives at Murdoch’s News Corp. on Monday, could be a breakthrough that provides political cover for Australia’s conservative government to end its refusal to set ambitious emission targets. If sustained, it could also put pressure on Fox News and other Murdoch-owned outlets in the United States and Britain that have been hostile to climate science.

But critics, including scientists who have been a target of News Corp.’s climate combat, warned that the effort could be little more than window dressing that leaves decades of damage intact.

“Color me skeptical,” said Michael E. Mann, director of the Earth System Science Center at Pennsylvania State University. “Until Rupert Murdoch and News Corp. call off their attack dogs at Fox News and The Wall Street Journal, who continue to promote climate change disinformation on a daily basis, these are hollow promises that should be viewed as a desperate ploy to rehabilitate the public image of a leading climate villain.”

As broadly outlined by News Corp. executives, the project will include features and editorials across the company’s influential newspapers, along with Sky News, its 24-hour news channel. They will explore a path to reaching net-zero emissions by 2050 — a target, set by dozens of countries, that scientific studies show is crucial to averting some of the most disastrous effects of global warming.

News Corp. executives in Australia have said little publicly about their plans, which were reported earlier by The Sydney Morning Herald. News Corp. and a spokesman for Murdoch did not respond to emailed requests for comment.

On Monday, ​​Paul Whittaker, the chief executive of Sky News, appeared in the Australian Senate to answer questions at a public hearing about misinformation in the media. He downplayed the reported shift in climate change priorities.

“I wouldn’t describe it as a campaign,” he said. “I would describe it, in terms of Sky News, as an exploration of what are very complex issues.”

Sky tends to be the most extreme of News Corp.’s properties. Last month, YouTube suspended the conservative news channel for a week for breaching the platform’s coronavirus misinformation policy. Two years ago, one of its hosts labeled climate change “a fraudulent and dangerous cult” that was “driven by unscrupulous and sinister interests.”

At many of the company’s newspapers, where solid journalism often sits beside unrelenting ideology in articles that often do not carry an “opinion” label, the editorial project has been widely discussed over the past few weeks, often with a sense of relief.

A senior newspaper employee with News Corp., who requested anonymity because he was not permitted to describe internal decision-making, said the editorial effort reflected a growing recognition by the company that the world had moved to a stronger stance on climate change.

He said the project had been developing for months, with various political and business figures given advance notice, a signal that the turn toward endorsing net-zero emissions risked surprising conservative allies.

Coordinated campaigns are not uncommon for News Corp., which is the dominant commercial provider of news in Australia, with newspapers in major cities and regional areas. Several outlets are currently pushing for a rapid uptake in COVID-19 vaccination.

In the case of global warming, the campaign will begin just before a new round of international climate talks in Scotland.

The timing elicited both hope and cynicism among critics of News Corp.’s climate coverage.

“If genuine, this could provide a critical boost to momentum needed for the Glasgow summit in November,” said Joëlle Gergis, a climate scientist at the Australian National University.

Mann, whose book “The New Climate War” looks closely at what he calls “inactivists” — the polluters, politicians and media outlets that have opposed climate action — said that News Corp. may have simply realized that denial in the face of increasingly harsh climate events, especially the horrific 2019-20 bush fires in Australia, was no longer tenable.

“They’ve turned to other tactics — delay, distraction, deflection, division, etc. — in their effort to maintain the fossil fuel status quo,” he said by email. “Focusing on a target of 2050, three decades away, kicks the can so far down the road that it’s largely meaningless. It allows the cynics to appeal to promises of new technology (carbon capture, geoengineering, etc.) decades down the road as a crutch for continuing business-as-usual fossil fuel burning.”

Malcolm Turnbull, a former Australian prime minister who was often attacked by News Corp. and was toppled in an intraparty dispute in 2018 over climate policy, also warned that News Corp. had a long track record that a few weeks of coverage could not erase.

News Corp.’s newfound commitment, he said, should be believed only if the company’s journalists and editors stop beating up on supporters of climate action and stop protecting the conservative members of Parliament who have resisted climate policy.

“That right-wing populist climate-denying section of the coalition is very influential, and its foundation is the News Corp. media,” Turnbull said. “That’s where they live and thrive. If there’s a change there, that would be significant.”

But, he added, “I’m not going to give them credit for something they haven’t done yet.”

Tweets by @forbesindia
$17 million in a year: Why are investors queueing up at Dukaan?
Why you might not be returning to the office until next year