Companies have new variables to consider including evidence that the effectiveness of vaccines, while still strong, may be waning and burned-out workers who are vaccinated at varying rates 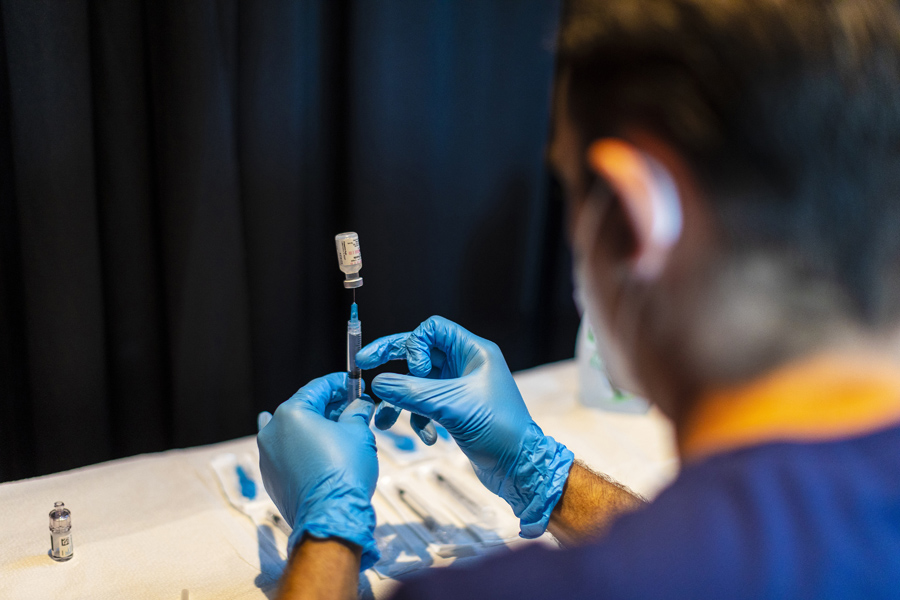 A health care worker prepares a dose of Pfizer’s COVID-19 vaccine in Miami, Aug. 5, 2021. The New York Times compiled a list of when large companies expect to have employees back at their desks and what their vaccine requirements will be. (Saul Martinez/The New York Times).

Last week, Uber executives huddled on a nighttime video call to make a difficult decision. They considered whether the ride-hailing company should join a growing list of companies once again delaying their return-to-office dates. Soon after, they announced that Uber would fully reopen its offices on Jan. 10, postponed from Oct. 25.

“I’ve been in HR for 30 years, and this is probably the hardest crisis I’ve had to deal with,” said Laura Faith, the senior director of people experience and operations at Uber. “This really is about life or death and health and safety.”

In the nearly 18 months since the pandemic first forced companies to send their employees to work from home, the date companies have planned to bring workers back to offices has changed again and again. First it was January, a full year after the coronavirus first surfaced in China. January slipped to July, as tens of millions of people lined up across America to be vaccinated.

But then the surge of vaccinations peaked, and the highly contagious delta variant of the coronavirus drove another spike in cases. For many companies, September became the new July.

Now September is out as an option, and it is anybody’s guess when workers will return to their offices in large numbers.

Companies have new variables to consider, including mask mandates that have been dropped and ordered back; evidence that the effectiveness of vaccines, while still strong, may be waning; booster shots; and burned-out workers who are vaccinated at varying rates. There are also the differing infection rates across the country and a shifting power dynamic between employers and employees.

In addition to Uber, companies including Google, Amazon, Apple and Starbucks have said they will postpone their return dates to next year. Executives say their rationale for the long delay is twofold: In addition to wanting to keep employees out of harm’s way, they are seeking an end to the roller coaster of anticipated return dates and further delays. The fits and starts make it difficult for employees to plan, and the hope is that a far-off return date will not need to be adjusted yet again.

“We wanted to make sure that we were giving employees a decision that gave them enough time to plan their lives,” Faith said. Pushing the date just one month later, for instance, “wasn’t giving them enough clarity.”

At Intel, executives recently scrapped a planned Sept. 1 return date for some sites in favor of an indefinite target. Many of the company’s more than 100,000 employees are working on-site at semiconductor fabrication plants around the world, but for office workers, the date by which employees will be asked to return now depends entirely on vaccination rates and case counts in their particular regions.

“How much certainty are you really giving people by throwing an arbitrary date out there?” said Todd Brady, Intel’s director of global public affairs. “If we say Oct. 1, who knows?”

In a recent poll of 1,600 employers by employment and labor law firm Littler, 40% of respondents said they had delayed plans to return more employees to in-person work. Half of respondents with more than 10,000 employees said the same.

Leading the charge of postponements are technology firms, which tend to have significant portions of employees who can do their jobs from home. In April, before delta had become the dominant strain of the virus in the United States, Airbnb moved its date all the way to September 2022.

“We anticipate the COVID situation will remain fluid for the upcoming months, making it difficult for us to land a clear return date without a possibility of moving it again,” Logan Green, CEO of Lyft, told employees in late July after announcing that they would not be expected to return to Lyft’s offices until February.

One reason some firms have delayed back-to-office dates is to take into account new considerations as vaccine mandates become more common, advisers say. In a recent Willis Towers Watson survey of nearly 1,000 companies, which together employ almost 10 million people, 52% of respondents said they planned to have vaccine mandates by the end of the year, compared with 21% that said they already had vaccine requirements.

Postponing gives the workers who are responding to new requirements sufficient time to become fully vaccinated. And it gives companies more time to set up the logistics that accompany vaccination mandates, such as processes for tracking vaccination status and, soon, who has received a booster.

“Within a company, a CEO can say: ‘Our company, our culture, our business. We need to be together, we need to be in the office, this is the date,’ ” said Mary Kay O’Neill, a senior health consultant at Mercer Consulting Group. “And then our friends in HR are like, ‘How are we going to do that?’ ”

For some organizations, negotiations with unions are also a factor. A spokesperson for NPR, which has not set a date for returning to the office, said the public radio network was working “with key stakeholders, including our unions, to evaluate the best approaches to keeping our staff safe and maintaining our operations.”

With new logistics around vaccine mandates, continued uncertainty around variants, and increasingly vocal employee demands, some companies, including The New York Times and American Airlines, have opted out of setting return dates.

Other companies remain both unyielding in their focus on a return and vague on its contours.

“I’m a firm believer that a good number of our team members want to return to some form of the office when they feel safe to do so,” General Electric’s CEO, Larry Culp, said at the company’s annual shareholder meeting in May. “And I’m looking forward to when that time comes.”