After a year of leading the global economy out of the pandemic slump, China's growth is now starting to level off, as the world tries to assess whether the country's recovery will continue or peter out 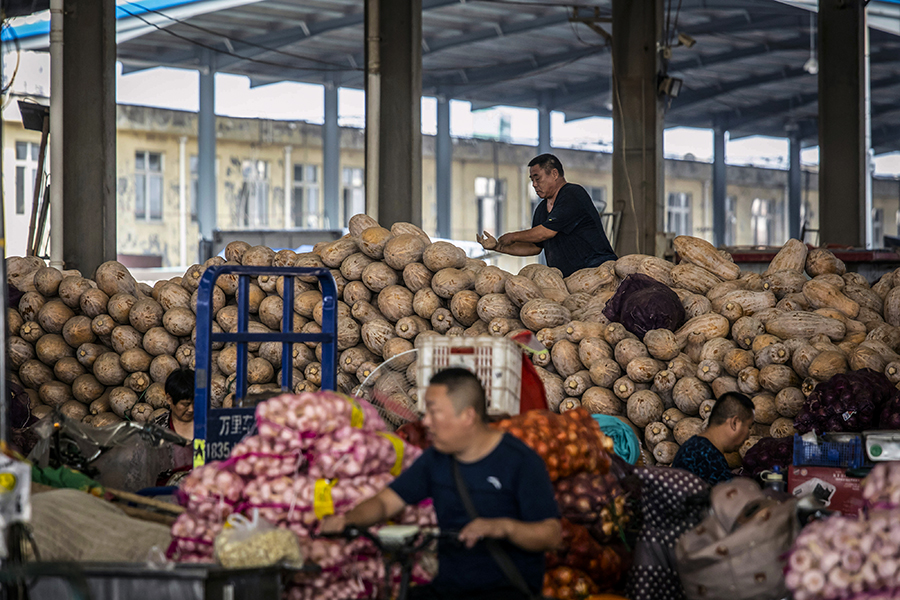 Sellers sort through pumpkins at a wholesale market in Jinan, in eastern China, on Tuesday, July 13, 2021. Consumer spending in the country has grown even more lackluster, despite its relative success in curbing outbreaks of COVID-19; Image: Qilai Shen/The New York Times

BEIJING — After a year of leading the global economy out of the pandemic slump, China’s growth is now starting to level off, as the world tries to assess whether the country’s recovery will continue or peter out.The signs are mixed, with consumers and companies showing signs of both weakness and strength. The rising cost of raw materials is eating into the profits of factories and retailers, while exports remain strong. People are shopping more, but small businesses are suffering. Inflation is starting to make a comeback, muddying the data. And the ongoing uncertainty of the pandemic weighs over it all.“It is unclear whether such a strong rebound in China and around the world can sustain itself in 2022,” said Zhu Ning, deputy dean of the Shanghai Advanced Institute of Finance.China reported Thursday that its economy grew 7.9% from April through June, compared with the same period last year, falling short of estimates. Although that pace is still stronger than in many other countries, it is markedly slower than the 18.3% leap the economy made in the first three months of the year as it bounced back from lockdowns a year earlier.China’s ultimate trajectory will be closely watched by the world. If China continues to chug along, it could portend a sustained recovery for the United States and other nations now bouncing back from their pandemic lows. If its economy further slows, it could drag down the rest of the global economy. Many countries now depend on Chinese factories and consumers.Economists cautioned that China’s actual economy is not quite as strong as the numbers released on Thursday might suggest. Inflation means that some of the statistics, like retail sales in June, overstate what is actually happening. Rising prices also suggest that the Chinese economy’s performance in the spring might not be sustainable.The Chinese government has sent a series of recent signals that economic growth might be in trouble. Premier Li Keqiang has held three high-profile meetings just in the past week on the economy’s health and issued statements after each of them, ordering a blizzard of measures to sustain growth.The most important of these measures was a policy shift by the central bank. China’s central bank moved to help small businesses get loans; starting Thursday commercial banks can keep somewhat smaller cash reserves. In theory, that frees the banks to lend more, which could stimulate business investments and consumer spending.

Looming over the country’s economy is an accumulated mountain of debt. China Beige Book, a quarterly survey of businesses across China, has found in recent weeks that many borrowers, especially retailers, have become cautious about taking out loans. Companies fear that they might not be able to repay additional loans.Growth in the April to June quarter was always expected to be lower than the steep growth that China reported in the first three months of the year. The first quarter’s growth rate was skewed partly because it reflected how much economic output had shrunk in the first three months of 2020, at the height of the outbreak in China.“China had a very fast pace of recovery over the past year — it’s going to be hard to maintain that pace,” said David Malpass, president of the World Bank, during a news conference before the latest data was released.Barclays Bank said in a research note that China seems to have settled into a new annual growth range of 5% to 5.5%. While considerably better than the growth in most Western countries, it is slower than the 6% to 6.5% growth China saw before the pandemic.“At home, the economic recovery is unbalanced,” said Liu Aihua, the spokesperson for China’s National Bureau of Statistics. “More efforts are needed to consolidate the foundation for the steady recovery of development.”Some of the problems Chinese businesses face are common across the world. Globally, commodities like iron ore, copper and oil have become more expensive over the past year, as have industrial materials like steel.For Song Liyun, a seller of stoves and range hoods in Jinan, an eastern Chinese city, the rise in global steel costs has meant a 30% to 40% jump in wholesale prices, much of which she has had to absorb.“The cost of materials has been rising, but the price we offer to customers can barely increase,” she said.The survival of small businesses now has an even greater bearing on how China can weather the pandemic and keep people employed. More than 100 million people work in retail and wholesale companies.Retail sales were up 12.1% in June from a year earlier, according to the bureau of statistics, helped by a surge in online spending.Most economists had expected retail sales to be weak that month. Car sales had fallen sharply, and new COVID-19 outbreaks in Guangdong had triggered lockdowns of large neighborhoods and restrictions on social gatherings and travel.But the increase in retail sales could also have been partly the result of rising prices. The broadest measure of prices in the Chinese economy surged 5.3% in April through June from a year earlier, according to calculations by CEIC Data, an economic data provider. It was the biggest jump in almost a decade, powered by higher global prices for raw materials.<p><iframe frameborder="0" height="232" width="100%" src="https://open.spotify.com/embed-podcast/episode/4VipPRkpi4VrhhqYj8UXmF" allowtransparency="true" allow="encrypted-media"></iframe></p>Retail sales were also hit by a slowdown in tourism and other service industries in recent weeks.Passenger rail travel, including the bullet trains that are now China’s dominant form of intercity travel, plunged 19.9% in June compared with the same month in 2019, before the pandemic. By contrast, passenger rail traffic had only been down 4.5% in May from two years earlier.The domestic travel sector’s weakness is visible in Qufu, the hometown of Confucius, 100 miles south of Jinan. Few tourists walked the streets Sunday and Monday, and many stores were empty.Business owners in the town said that they had only half as many tourists as before the pandemic.“It’s not easy for anyone now,” said Xiao Weijun, owner of a cheap eatery near the temple where Confucius’ house stood 2,500 years ago. “I feel that our lives won’t be able to recover in the next year or two.”