China's growth target comes as the virus has been all but halted within its borders, and as the number of cases has fallen steeply in recent weeks in countries like the United States and India 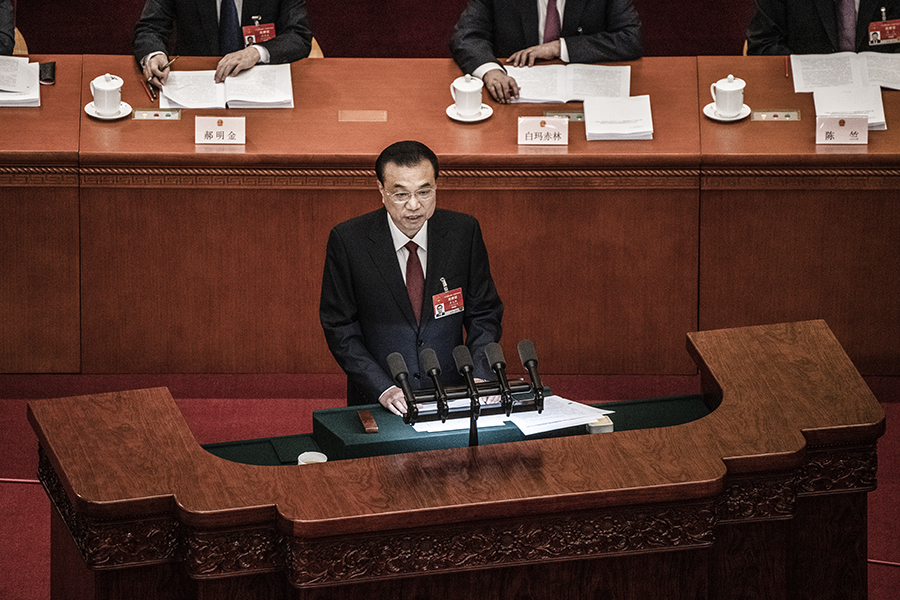 Beijing, China, March 05: Chinese Premier Li Keqiang speaks at the opening session of the National People's Congress at the Great Hall of the People on March 5, 2021 in Beijing, China.
Image: Kevin Frayer/Getty Images

BEIJING — One year after China was battered by the coronavirus, the government promised Friday a robust return to economic growth of “over 6%,” a signal that China is ready to do what it takes to keep the world’s second-largest economy running strongly. As top officials laid out a confident vision for China’s ascent in the coming years, they also drew a hard line on perceived threats to the Communist Party’s authority in Hong Kong with a move to restrict democratic elections there, in the wake of the anti-government protests that engulfed the city in 2019. The commitment to a relatively rapid economic growth rate is a positive sign for the global economy. It suggests that Beijing is willing to free up money to keep its economy humming rather than slowing down to address its ever-rising tide of debt. That means the Chinese economy will continue to buy much of what the world makes, including iron ore and computer chips. China’s growth target comes as the virus has been all but halted within its borders, and as the number of cases has fallen steeply in recent weeks in countries like the United States and India. China’s target for this year may be easy to achieve. It is well below what many Western economists expect the Chinese economy to realize. They have been forecasting an expansion of about 8%, as exports of manufactured goods continue to boom while the service sector rebounds from a very weak performance last year.
Even as he announced the target, China’s premier, Li Keqiang, warned of risks that lay ahead. “As the coronavirus continues to spread around the world, instability and uncertainty are mounting on the international landscape, and the global economy continues to face grave challenges,” Li said as he delivered a report on the government’s work to the legislature, the National People’s Congress, at the start of its weeklong annual gathering. The congress is also poised to intensify China’s clampdown in Hong Kong, building on a national security law that Beijing imposed on the city last year. This year, delegates are set to approve a proposal to drastically shrink democratic competition in local elections in the former British colony. The planned overhaul of Hong Kong’s election laws would make it very hard for democracy advocates to hold — or even contest — any positions of power. China will rewrite the rules on how Hong Kong’s top local official, called the chief executive, and its legislature are chosen, Wang Chen, a Politburo member who specializes in legal matters, said in a speech.
He said that Beijing would overhaul the membership of the territory’s Election Committee, a body that chooses the chief executive, whose approximately 1,200 members are selected by groups that have typically been loyal to Beijing and the city’s business elite. China will also set up a new, separate procedure to vet candidates for various levels of elective office in Hong Kong. Wang said the changes would make sure that only solidly loyal supporters of China could be involved in the territory’s government. “Ensure that control is firmly in the hands of forces that love their country and love Hong Kong,” he told the congress. The pending legislation follows a crackdown that has already dissuaded most democracy advocates in Hong Kong from speaking out against Beijing. “They want to consolidate it so the dissidents or democrats cannot make a comeback,” said Steve Tsang, director of the SOAS China Institute in London.
Li, the premier, struck a firm stance on Hong Kong, saying that Beijing would not condone any threats to its sovereignty in the territory. He also took a tough line over Taiwan — the democratically governed island that Beijing claims as its territory — using language that appeared harsher than the government has used in previous work reports. The current president of Taiwan, Tsai Ing-wen, has resisted Beijing’s demands to accept the mainland’s definition of the island’s status. “We will remain highly vigilant against and resolutely deter any separatist activity seeking ‘Taiwan independence,’ ” Li said. But Li’s message was heavily focused on China’s recovery from the pandemic, which just over a year ago threw the country into its worst crisis since the Tiananmen crackdown of 1989. The growth forecast for this year indicates that China expects a striking bounce-back after last year, when the uncertainties of the pandemic led the government to abandon setting an annual growth target for the first time in decades. Ultimately, China recorded growth of 2.3% in 2020, much slower than the usual pace of 6% or higher in recent years, but by far the best performance of any major economy.
But China’s growth last year was even more unbalanced than usual. The country actually lost ground on its goal of shifting away from its addiction to exports and debt-fueled infrastructure investments and toward a more sustainable reliance on domestic consumption. As in most countries during the pandemic, travel and leisure spending plummeted in China last year. He pledged to cut taxes for the smallest businesses, many of which are tiny shops in towns and villages. But infrastructure spending will continue at a very fast pace. Li announced only a token cut — 2.7% — in the issuance this year of special-purpose bonds, which are mostly used to pay for infrastructure projects and had nearly tripled in the past two years. Li promised Friday to step up efforts to boost consumption. “With a focus on improving the people’s well-being, we will expand demand and promote a better alignment between consumption and investment,” he said.
His government also released a draft plan for long-term development, setting out goals to transform the country into a technologically advanced and environmentally clean power over the five years and beyond.

Tweets by @forbesindia
Ten interesting things we read this week
One and done: Why people are eager for Johnson & Johnson's vaccine