Pedalling to work? You don't have to break a sweat

Already massive in China and popular in Europe, electric bikes are making inroads in the US. An MIT engineer thinks his throwback design will win over city dwellers 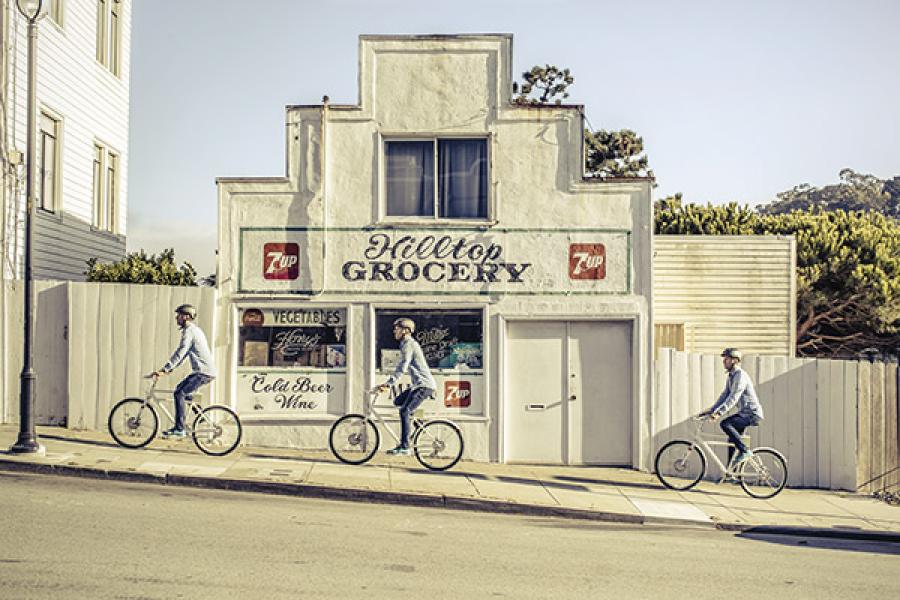 It’s 75 degrees, a warm day in San Francisco, but Adam Vollmer isn’t sweating as he mounts a steady grade toward Mission Dolores Park.

“I used to hate biking to work,” he says as he pedals along. “There’s this hill by my house that just pitches straight up a wall. Now it’s not so bad.” That’s because Vollmer, 36, a mechanical engineer with the trim build of an endurance athlete, can always get a boost from his bike’s hidden motor.

As the CEO and founder of Faraday, a four-year-old electric-bike company, he believes he can carve out a profitable slice of the nascent US market for e-bikes. The target customer for his $2,500 machines: People who want to get from point A to point B in a dense urban environment where driving and parking can be a nightmare. Many commuters favour e-bikes over manual models because they allow you to zip to work at speeds of up to 20 mph without breaking a sweat. Others simply think they’re fun. And ageing boomers, who may have given up riding because of arthritic knees or poor fitness, find that e-bikes are getting them back on the road.

Faraday riders have options. If they don’t push the blue power button on the back of the controller, a rectangular box the size of a large wallet that sits below the seat, the Faraday works like a regular bike. Once the motor, which is embedded in the bike’s front hub, is turned on, the head- and tail-lights illuminate and a thumb switch on the left handlebar can select medium or high power. Start pedalling and a sensor in the crank activates the motor. The harder the rider pumps, the greater the motorised help, making San Francisco’s hills feel like flats.

Last year, e-bike sales in the US came to $400 million, up from $100 million in 2012, according to figures compiled by Edward Benjamin, chairman of the Light Electric Vehicle Association, an e-bike trade group. That’s tiny compared with Europe’s 2015 sales of $5 billion and China’s sales of $10.8 billion. But Chinese commuters use e-bikes because of economic necessity and choking pollution. Europeans have long accepted bikes, including electronic models, as a way of commuting. In the US, where car culture prevails and cycling has traditionally been viewed as recreation, e-bikes are just now catching on. “The US is roughly ten years behind Europe,” says Benjamin. Even so, more than 150 e-bike brands crowd the American market (see graphic). The two biggest US-based e-bike makers, both eight years old: Pedego, in Fountain Valley, California, and ProdecoTech, in Oakland Park, Florida.

Even carmakers have signalled an interest in e-bikes. Back in 1997, Lee Iacocca tried to start an e-bike company, EV Global Motors, but he wanted to sell the bikes through car dealers. It flopped within three years. Last October, at GM’s global business conference in Milford, Michigan, the company showed a rendering of a concept e-bike. “As we look at the trend in urbanisation,” says a GM spokesman, “we want to make sure we are exploring all the possibilities to help people move around.” Likewise in 2015, Ford developed prototypes for three foldable e-bikes. 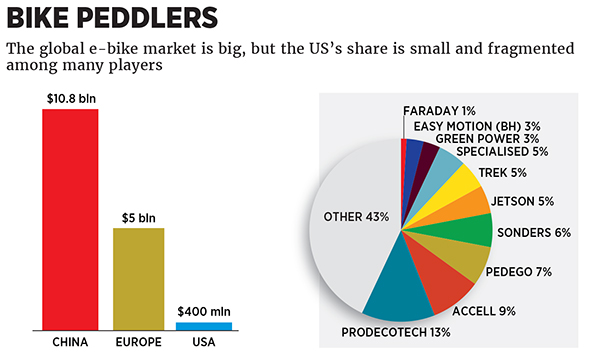 What sets Faraday e-bikes apart is their elegant design. While competitors tend toward the clunky and utilitarian, Faraday’s two models, the Porteur and the Cortland, echo British touring bikes from the 1960s. Both sport steam-bent lacquered bamboo fenders and brown leather handgrips. Helped by improving infrastructure, including dedicated bike lanes and paths in cities like New York, Minneapolis, Miami and even Los Angeles, Vollmer’s sales are popping, from $1 million in 2014, the first year Faraday shipped bikes, to $2 million in 2015. He expects revenue of $4 million this year and projects he’ll turn a profit in 2017.

In 2008, with mechanical engineering degrees from Stanford and MIT, Vollmer landed at IDEO, the Palo Alto design firm famous for crafting Apple’s first mouse. When a group called the Oregon Manifest invited IDEO to enter a contest to reinvent the modern bicycle in 2011, he assembled a team and got to work, putting in extra hours on nights and weekends. “We were aware of electric bikes as an emerging fringe category,” he says. “We went out and tried a lot of electric bikes and found them really uninspiring.” His goal was to design a bike that was efficient, fun to ride and beautiful. Driving past the Tesla showroom one day, the team settled on the name Faraday, for the 19th-century British pioneer of electromagnetic technology.

Faraday won the contest, and in exchange for a small equity stake, IDEO agreed to supply initial funding and design services to help Vollmer get the company off the ground. He has since run two Kickstarter campaigns that together brought in another $365,000 and has raised funds from angel investors such as Twitter co-founder Biz Stone and former Tesla sales VP Matt Eggers. Vollmer and his six employees work in a 1,500-square-foot office tucked into an alley between the headquarters of Airbnb and Pinterest in San Francisco’s SoMa neighbourhood. Vollmer explored producing the bikes in the US, but he quickly learnt that almost all the world’s bike manufacturing has moved to Asia. Faraday staffers design the frames and electronics, the parts are sourced in Asia and the bikes are assembled in Taiwan.

Most Chinese e-bikes, which cost around $300, use heavy, cheap lead-acid batteries that run out of charge in 20 miles. Since 2003, virtually all European and American e-bikes rely on lightweight lithium-ion battery packs that can go up to 100 miles and that fit inside a slightly enlarged down tube (the piece that slopes from the handlebars to the pedals). Faraday bikes use front-hub motors, but many e-bikes, like those made by Stromer, the Swiss company that sells the most expensive ones on the market at a top price of $9,500, house the motor in the rear hub. Trek’s ten US models use motors mounted next to the crank; the company’s offerings include $3,000 mountain bikes popular with older riders who don’t have the pep for the strenuous sport but find they can keep going under motor power.

Faraday, like most US e-bike brands, uses so-called pedal-assist technology, meaning the motor kicks in only after the rider starts pedalling. “People want the sensation of riding a bike, and they want exercise,” Vollmer says. “They just don’t want to work up a terrific sweat.” His market: “People who have an appreciation for bikes, who ride a little already.” That’s Vollmer, who concedes he still takes out his dusty 2006 Mazda if he wants to head to the Napa Valley for the weekend. “But from Monday through Friday,” he says, “I do everything I can to avoid driving my car.”