Firefox now allows users to block audio, video that auto-play in the browser

Had enough of the autoplay videos with sound on the Firefox browser? Its about to stop. 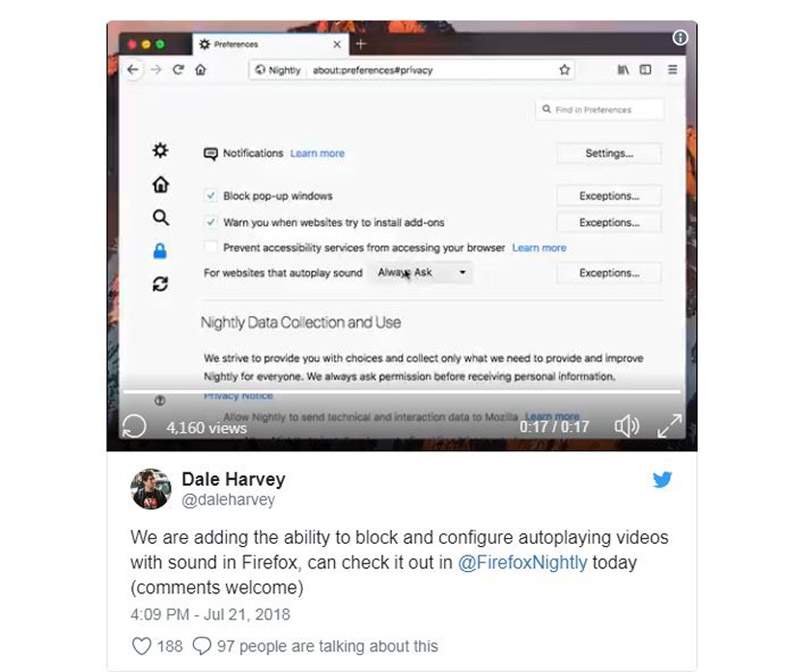 On the scale of mad to extremely annoying, how much does the sound-blaring autoplay audio and videos on browsers bother you? Fortunately, Firefox has finally made a note of this and has now updated the browser to allow users to block any audio or video that automatically go off.

Apple's Safari and Google Chrome browser already offer this feature, and finally, Firefox has caught on to it as well.

Recently, Mozilla's Dale Harvey announced that Firefox is currently testing a feature to allow users to block autoplay videos with sound on Nightly.

We are adding the ability to block and configure autoplaying videos with sound in Firefox, can check it out in @FirefoxNightly today (comments welcome) pic.twitter.com/k9K9hQC9Ye


A report by CNET, also said that Mozilla recently added this feature to Firefox Nightly, which is the new test version of the browser. The test browser started to automatically prompt users asking if they wanted to block an autoplay video with sound. The feature is expected to come on the main Firefox browser October 2018.

This update, although comes in pretty late on Firefox, is meant to reduce unexpected video playbacks with sound when first opening a web page.

So, if your website has been haunting readers with an unexpecting sound-blaring surprise, you better reconsider muting that.