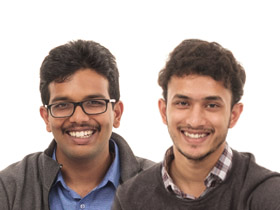 The research was supposed to get Rohan M Ganapathy into an Ivy League college but instead the technology for a microwave electro-thermal thruster for satellite propulsion in space took him and Yashas Karanam the startup way, landing their company, Bellatrix Aerospace, a developmental order from the Indian Space Research Organisation (Isro) in 2016.

Ganapathy, an aeronautical engineer from Hindusthan College, Coimbatore, started researching the technology in early 2011. A Rs 20 lakh grant from JSW in 2013 helped them prove their technology by the end of 2015. The product is being tested along with Isro, and is expected to be launched in 2019.

"It is a unique and unlikely field for a startup—satellite propulsion, with a technique never tried by anyone. It [the technology] uses water as a propellant, instantaneously heating it by microwave-induced plasma," says Dr Prem Shankar Goel, former director, Isro Satellite Centre, Bengaluru. "The physics was known but no one had tried it."

"Considering our age, no one could believe we could come up with something so technically challenging. But you try more and you get the results. That is the case with every researcher," says Ganapathy, CEO.

Bellatrix Aerospace, incubated at the Indian Institute of Science, Bengaluru, is also working on Chetak, a two-stage launch vehicle with a reusable first stage. Both stages of Chetak, planned for a 2023 launch, will use liquid methane, a cleaner fuel. "We want to make space clean, green and affordable," says Ganapathy.