How Indian Science is Taking Over the World

Who do you think a geek is? That introvert in the corner of the party or that comic book collector who goes to Star Trek conventions? The professor holed up in her laboratory or the software guy hunched over his keyboard churning out code?

“…To me, at least, geekiness is all about passion. It’s about choosing science and technology or another intellectual pursuit,” says Angela Saini. 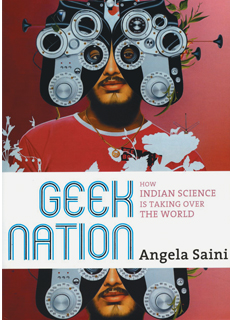 Saini is a British science writer who criss-crosses India — even managing to attend that parody of science events the Indian Science Congress has come to denote — to get her story: India as the land of geeks. In a journey that’s carefully planned, and in a book that’s well-written, she gives a broad-brush account of some scientific efforts but fails to convince the reader that “Indian science is taking over the world”.

Hers is a romantic view of India, the rosy picture accentuated by the fact that economic conditions have led most developed nations to cut back their spending on science and technology and India, in contrast, is pumping money into this field. But Saini should know that geekiness, of the scale she is talking about, is a function of the milieu.

She gets first hand experience of it at IIT Delhi where she discovers, fairly early in her journey, that the famed IITians “aren’t geeks. They’re more like drones.” That image gets amplified at India’s largest software company, Tata Consultancy Services, where its chief technology officer has been trying to engineer innovation for a while. The examples he cites to Saini thoroughly disappoint her: They smack of tech reconstruction rather than innovation.

Saini is a good story teller; her prose has a rhythm of its own. The narrative neatly ties together the chapters as well as the arguments but the problem is with the stories themselves: Individually and collectively, they do not persuade us to believe her hypothesis.

Take for instance open source drug discovery (OSDD): the newest of all the science projects Saini talks about, and a classic example of a tiny oasis of good-calibre science in a vast desert. It’s the brainchild of Council of Scientific and Industrial Research (CSIR) director general Samir Brahmachari, who is himself surprised at the interest OSDD has generated in the international community. I won’t go into the usual argument that most sceptics hold — when will a drug come out it? — but it’s worth asking: Has CSIR managed to bring similar zeal, or geekiness if you will, in to its 37 other laboratories? If it had, it would have produced geeks in hordes.

It’s interesting that Saini starts her journey from Thumba, the birthplace of India’s space programme. She lets former ISRO chairman U.R. Rao go merrily down memory lane but fails to pick up the turmoil that the Indian space programme is currently in. Whether that’s a sign of a maturing organisation or one veering away from its path is a question the book could have at least raised.

As Saini took her flight to India, it seems along with the hypothesis she also had the title clear in her head (she tells Rao right in the beginning what her book title would be), but the evidence she provides makes it a case of poor sampling, full of drones and freaks and rather lacking in geeks.

Tweets by @forbesindia
How Much Does Your Happiness Cost?
Once Upon a Family: The Churn at Infosys