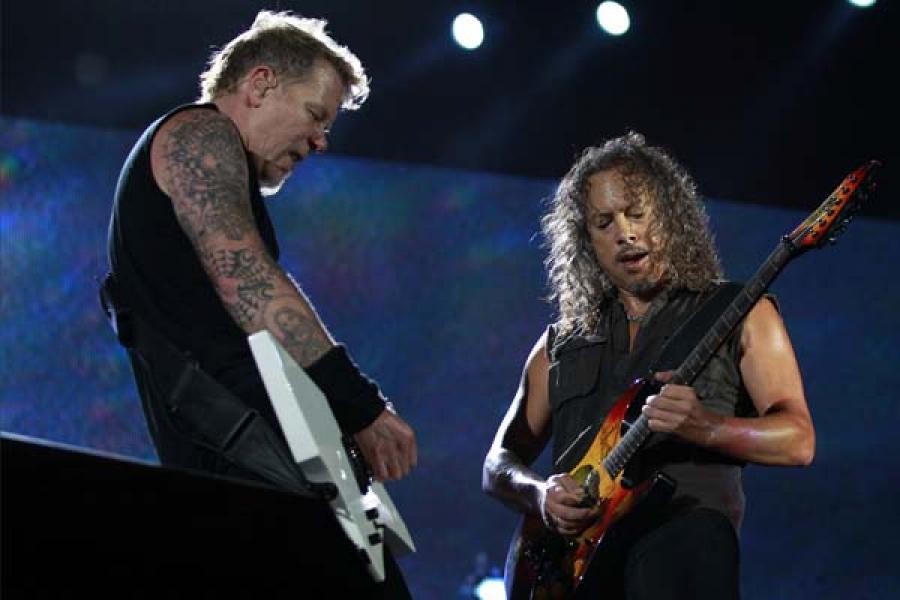 The wait was worth it. The rain, the rumours about the show getting cancelled, queuing up for an hour and a half, getting muck all over our shoes and the crappy organisation, it didn’t matter when James Hetfield, Lars Ulrich, Kirk Hammett and Robert Trujillo came onstage. Metallica came, they played and they blew our minds out.

They started off the over-two-hour set with Creeping Death and the crowd went nuts. They followed it up with For Whom the Bell Tolls, Fuel and Ride the Lightning and we lapped it up. Next up was Fade to Black and the 30,000-odd fans sang along Hetfield. Hetfield then had his ‘India’ moment with The Memory Remains. The Metallica faithful went ra ra over the song and the band just stopped playing as the crowd completed the last five minutes of the song for the band. Leaving Metallica and Hetfiled speechless, wonder how many countries can boast that!

This was just the warm-up for the mayhem to follow when the foursome played One, Master of Puppets and Blackened back-to-back. It was pandemonium as random moshpits broke out, people screamed themselves hoarse and the three guitarists ran across the stage exhorting the crowd into increasing levels of intensity. They needed to calm the crowd down and no song does it better than Nothing Else Matters, the Metallica anthem for any fan. Enter Sandman was the next song before the band made a show of leaving the stage. We weren’t having any of it and they knew we wouldn’t let them off that easy. They came back with a tribute to Diamondhead’s Am I Evil?, before polishing the show off with Battery and Seek and Destroy.

Great bands know how to connect with their audiences. In the movie Almost Famous, the lead singer of the fictional band Stillwater, tells William Miller, “I look for the guy [in the crowd] who isn’t getting off and I make him get off.” If there was someone in the crowd who didn’t get off on Metallica in Bangalore, I am pretty sure he was deaf.

Hetfield with his I-know-we-are-so-cool peacock strut, Ulrich and his manic energy as he thumped his drum kit for all its worth and Hammett with his intoxicating guitar work will never get out of my head. But it was Trujillo who was the revelation. Most Metallica videos have little visuals of the long-haired bassist. He was stage presence personified in Bangalore. Part prowling panther, part retarded jack rabbit, he spun, he growled and he made the bass do magic. The producer in charge of the online edit, that’s the guy who decided what’s shown on the concert screens, was a maverick and the visuals changed by the second, showcasing Metallica in all forms and they played a huge part in getting the crowd all charged up.

Too soon though, the band had to leave and the band said their goodbyes. Hetfield, Hammett and Trujillo came and went but it was Ulrich who said the words that all of us wanted to hear, “Metallica will come to India again very soon”. It could be complete hogwash considering the fiasco in Delhi. But hope floats!

Show More
Get the latest stories, videos, and podcasts from Forbes India directly in your inbox every Saturday
Thank you for your comment, we value your opinion and the time you took to write to us!
Comments 13