Real Time Bidding is a fast rising ad technology that is transparent and efficient. It is also changing the ground rules of online advertising

There's an old saying about newspapers: They aren’t delivering news to readers, but readers to advertisers.

But as many newspapers migrated to the web, where readers, in most cases, hate to pay for news at all, the saying evolved to: If you’re not paying for it, you’re the product.

Dismal as it may sound, most people realise that is the way the media business operates. Readers rarely pay full or fair price for content—at least in the opinion of publishers—so bombarding them with targeted ads was the best way to make up for the shortfall.

But unlike search advertising (the ads you see on search engines) where ads have been tailored for individuals for years now, display advertising (the ads you see on web pages) has mostly been about showing the same ad to a bunch of users. Meaning, if you visit the website of, say, Times of India, you will see the same ads as the visitor immediately before or after you. 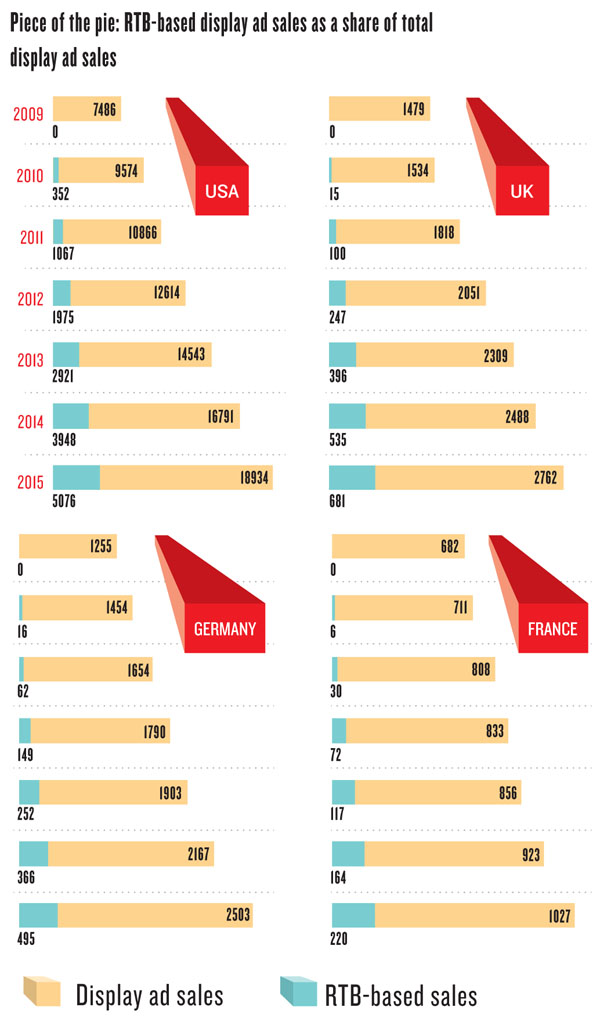 Of course, the ads might be different depending on the page you visit. The ads on the home page and other highly read ones—termed “premium pages”—are usually sold in bulk and at a premium by the publisher’s in-house ad sales team. Ads on other pages are sold in lots of thousands (Cost Per Thousand, or CPM) through third party ad exchanges.

Nevertheless, the common thread across both categories is the bunching together and targeting of thousands of different users at a time.
But a fast rising ad technology called “Real Time Bidding” is changing all that by allowing advertisers and publishers to transact with each other for every single ad impression!

A user heads to a page on a publisher’s website, causing it to start loading. In the same instant the publisher sends out a “bid request” to tens of hundreds of potential advertisers saying, “We’ve got this user who is 30, Indian, male and based in New Jersey, US, and recently searched for return air tickets to Delhi, opening a page on our site. How much are you willing to bid for being the only ad on this page?”

Within about 100 milliseconds the publisher gets bids from different advertisers, which it then analyses to figure out the highest bidder and the brands being advertised. The winner is alerted by the publisher and allowed to place its ad on the page.

The remarkable thing about this entire process is how fast and how often it takes place. The entire series of to-and-fro communication between publisher and advertisers takes place in 300-500 milliseconds, causing no visible delay to the user. This process is repeated for every ad slot on a page, and often there are many like the leaderboard, skyscraper and button just to name a few.

Rajeev Goel, CEO and co-founder of US-headquartered PubMatic, the largest independent “sell side platform” (SSPs aggregate and sell ad inventory on behalf of publishers) in the world, says his company processes “multiple billions” of real time ad impressions everyday. He claims PubMatic was the first SSP to offer real time bidding, in early 2009 and says it is “the most important innovation in online advertising in the last 10 years!”

Vizury transacts in such ads as a “demand side platform” (DSPs buy ads on behalf of multiple advertisers) and receives over 1,000 “pings” on its servers every second, each one corresponding to a bid request.

Processing such volume at such speeds takes not just raw processing power but also very low “latency” times, so most participants locate their servers as physically close to their customers as possible. PubMatic has multiple data centres around the world, processing nearly 4 terabytes of data on a daily basis while Vizury has three data centres each in the US, Europe and South-East Asia.

“The availability of almost infinite computing power on the internet over the last four to five years is a major reason for real time bidding taking off,” says Kulkarni.

The Future of Display Advertising
Real time bidding started out as a way for publishers to dispose of their non-premium ad inventory in an automated and low-cost way, leaving their own sales force free to sell higher-priced premium inventory.

But as advertisers and marketers started using it they spotted its benefits—access to larger inventory, transparent pricing, real time and better targeting—resulting in better ROI (return on investment) on their ad spends. They could now choose not just the type of page on which to place their ads, but the profile of the user and recent actions performed, time of day, position of the ad on the page etc.

As they moved more budgets towards real time bidding, it put in motion a cycle that enabled publishers to sell more unsold inventory to a larger set of advertisers.

IDC estimates that real time advertising will grow at a compounded rate of 71 percent in the US until 2015 and end up being 27 percent of the overall online ad spending. “Real time bidding is growing seven to eight times faster than search advertising,” says Goel.

The growth prognosis is even better in the three other countries where real time bidding has started off—the UK, Germany and France—with expected compounded growth rates at or above 100 percent.

In fact publishers are likely to adopt it even for selling their cherished premium ads, due to pressure from advertisers (who like its transparency and efficiency) and to keep their own costs of selling low.

But it will still be a while before we see it in India, simply because our online advertising market doesn’t offer the scale that will justify spending on a new technology.