Heena and Harsh Mandavia have distributed over 26,000 meals in Mumbai's western suburbs by employing households that have lost jobs or faced paycuts due to the pandemic 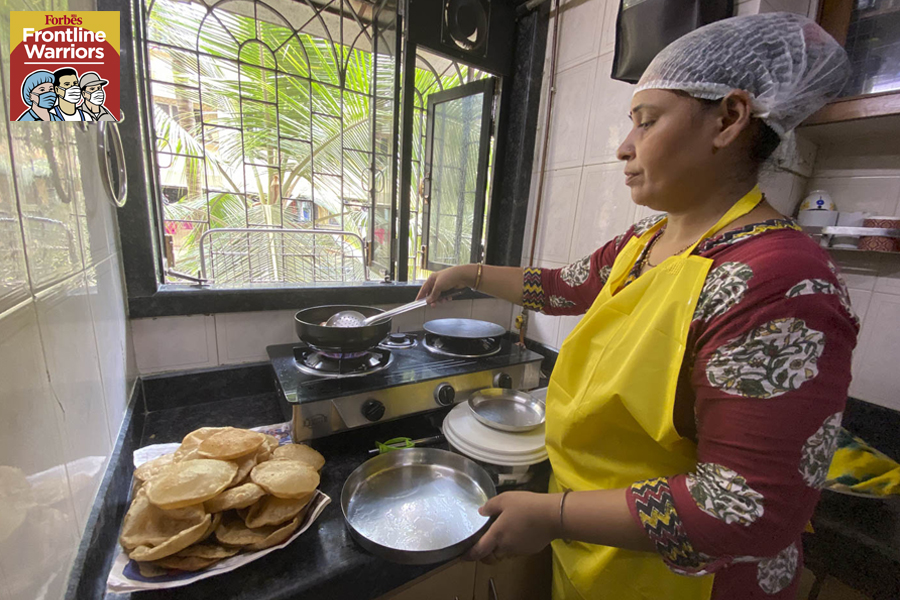 Heena Mandavia (50) and her son Harsh (27), co-owners of Harsh Thali And Parathas (HTP) in Mumbai’s Kandivali, have distributed more than 26,000 meals, 62,000 tawa rotis, 7,000 homemade sweets and 1000 immunity booster sweets to jobless migrant workers, house-maids, garbage collectors, rickshaw drivers, orphanages and old age homes during the pandemic and still continue to feed 150-200 people daily. Says Heena: “I always tell Harsh what our grandparents used to teach us, ‘Haath hamesha denewala rakhna, lenewala nahi’ (it is in giving that we receive).”When the lockdown was being extended constantly, Heena realised the silent, untold agony of the middle class—it resided in apartments and towers in Mumbai, but, faced with job losses and pay cuts, struggled to pay EMIs, school fees or even daily expenses.   While offering them money or loan would have been an affront to their self-esteem, Heena found a way around it when one of her regular customers, Abhinav Chaudhary, offered to donate to feed people during the prolonged lockdown. Why not involve the middle-class women in the locality to make the food, she wondered. Heena could have made the chapatis herself, or get her chefs to do them, but outsourcing it to these ladies would help them earn livelihood and run their household. Today, each family makes about 100 rotis through the whole week and around 50 puris on the weekend, earning them about Rs 15,000 per month on an average. Says Heena: “Ultimately, an entrepreneur should aim at giving back to the society/ community as well, and earn enough for himself/herself. We are okay with not earning the entire one rupee, we really feel good if everyone in the supply chain earns 20 paise.” The mother-son duo wants to continue this initiative irrespective of the pandemic to pay forward the kindness they’ve received from strangers throughout their lives. When she lost her husband at a young age, Harsh’s education at an international school was sponsored by a stranger, while someone else helped her start her food venture.   Says Harsh: “My mother and I feel overwhelmed with this level of trust shown by random strangers and we genuinely feel grateful that we have been a medium in connecting the donors to the needy.” 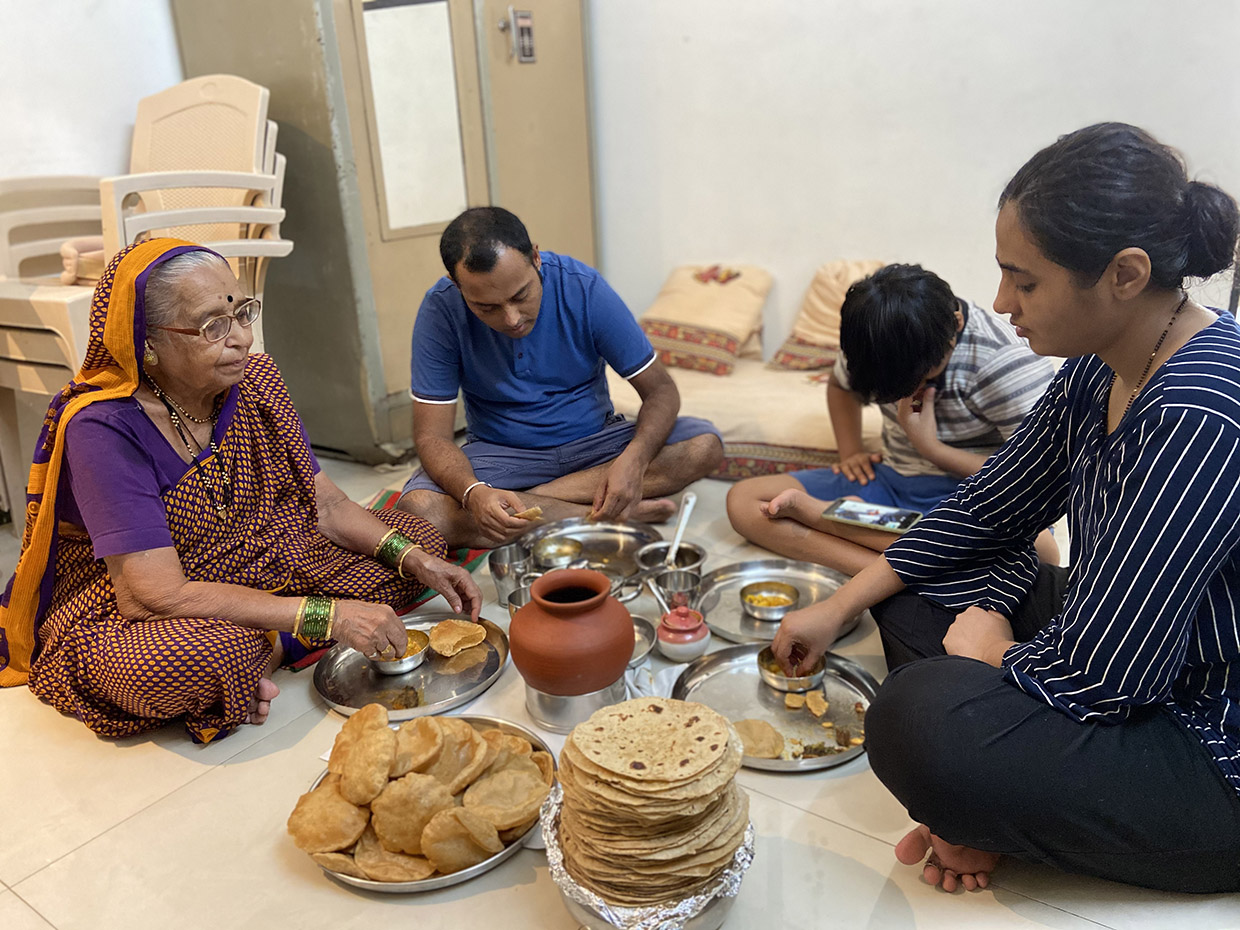 Sanjay Patil, a make-up artiste for celebrities, helps his wife Poonam, a Hindi and Marathi teacher, fry puris. Due to the lockdown, weddings, and events in the film industry, Sanjay’s regular sources of income, came to a standstill. Poonam’s tuition business also shut. This is how the Patil couple are keeping wheels rolling. 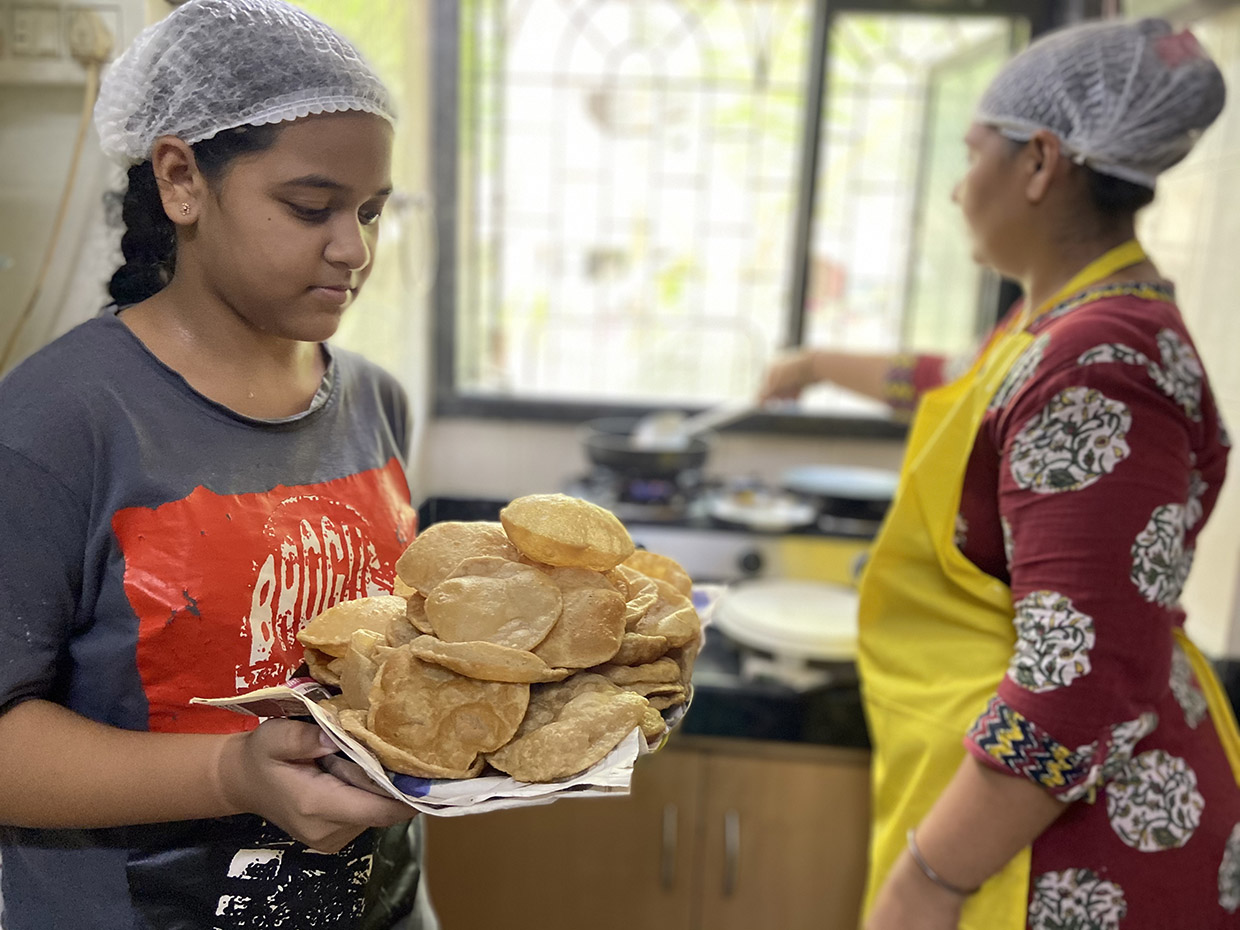 Sheetal Mallah is a pre-primary school teacher and her husband Prakash is in the production business (making film sets, maintaining sites, etc.). Since last year's lockdown, business has been low, yet expenses to run a household have remained fixed and recurring. Sheetal (seen with her daughter Riya in the foreground) has now taken to making rotis and sweets for Heena and Harsh. 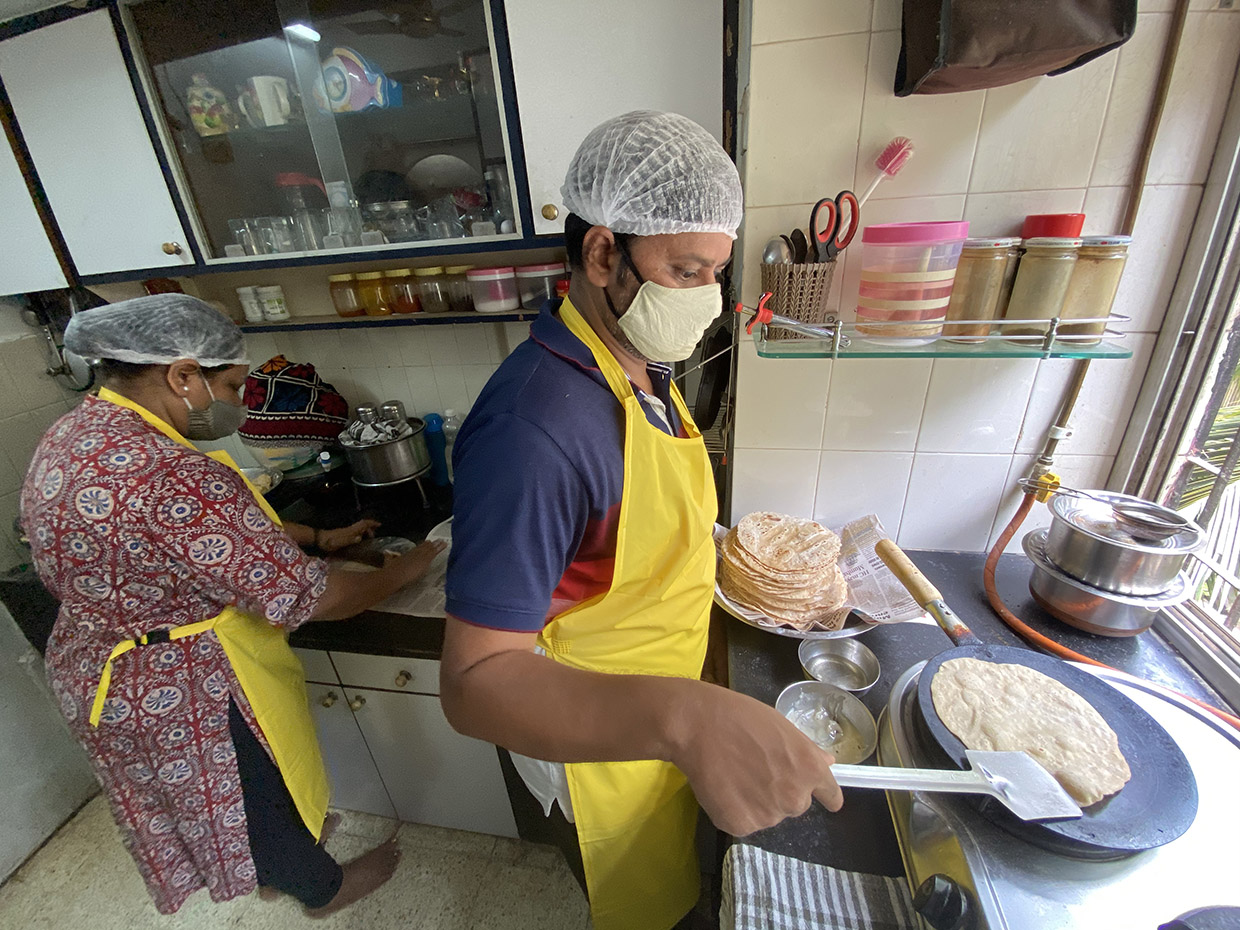 Shreyesh Birwadkar works as a school admin, but due to the lockdown has faced pay cuts. Saddled with EMIs, a home loan and fees for two kids, one in school and the other in college, he approached Harsh for “any work” that he could offer him. Now, he and his wife Darshana make chapatis for him on a daily basis. Besides his day job, Shreyesh spends at least two hours in the kitchen and sometimes even delivers the orders. 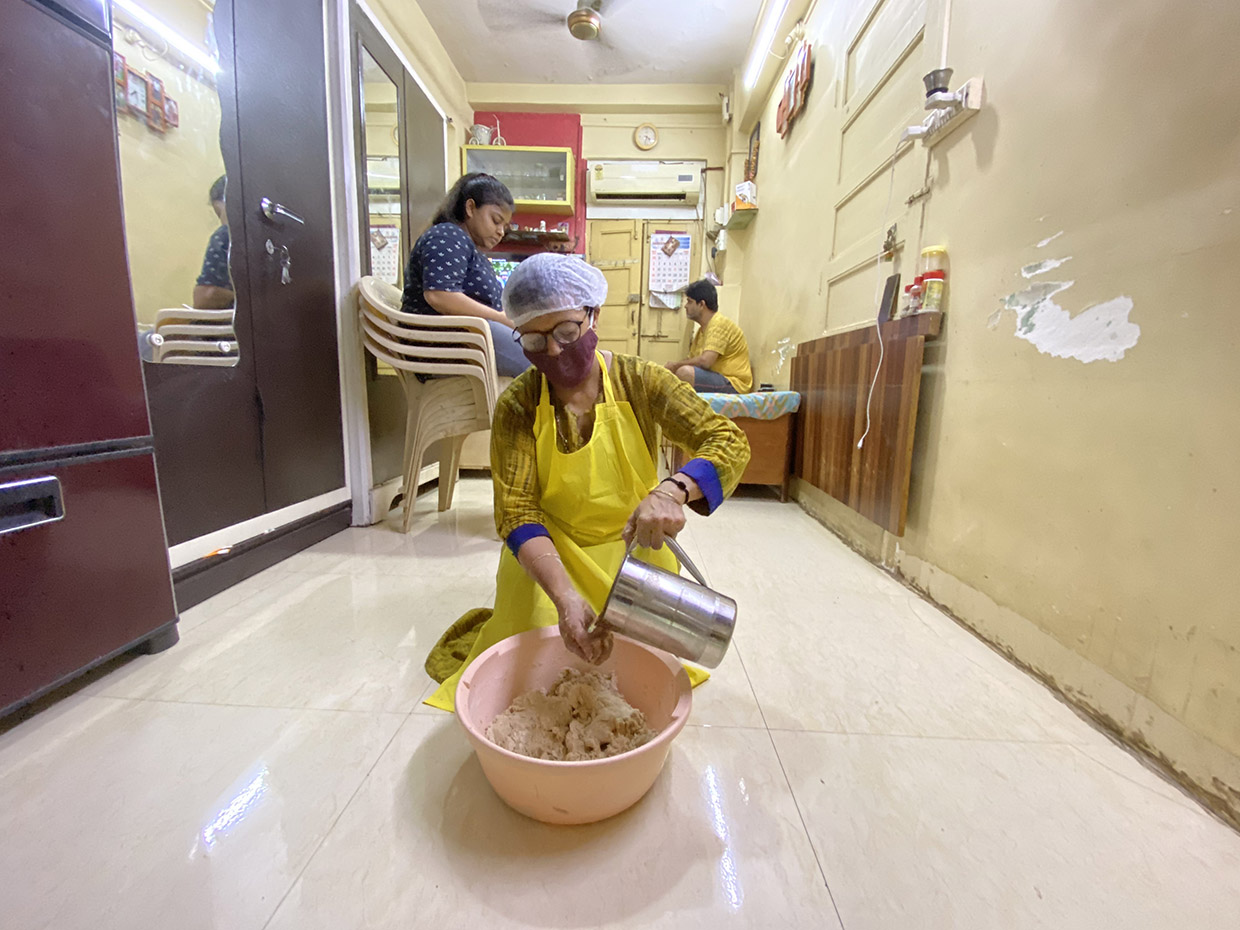 Usha Amlani kneads the dough on the floor at her home with her husband Bhavesh and daughter Isha in the background. The family’s medical bills ran up to Rs 6 lakh after Bhavesh was hospitalised with Covid. His uncle, also his employer, paid it upfront, but the family has to repay the loan even as Bhavesh is facing a paycut. Usha goes to two houses to cook and also prepares rotis for Heena and Harsh every day; Isha often does the delivery on her scooter. With this additional income, they are managing to pay for their child’s education as well as run the household seamlessly. 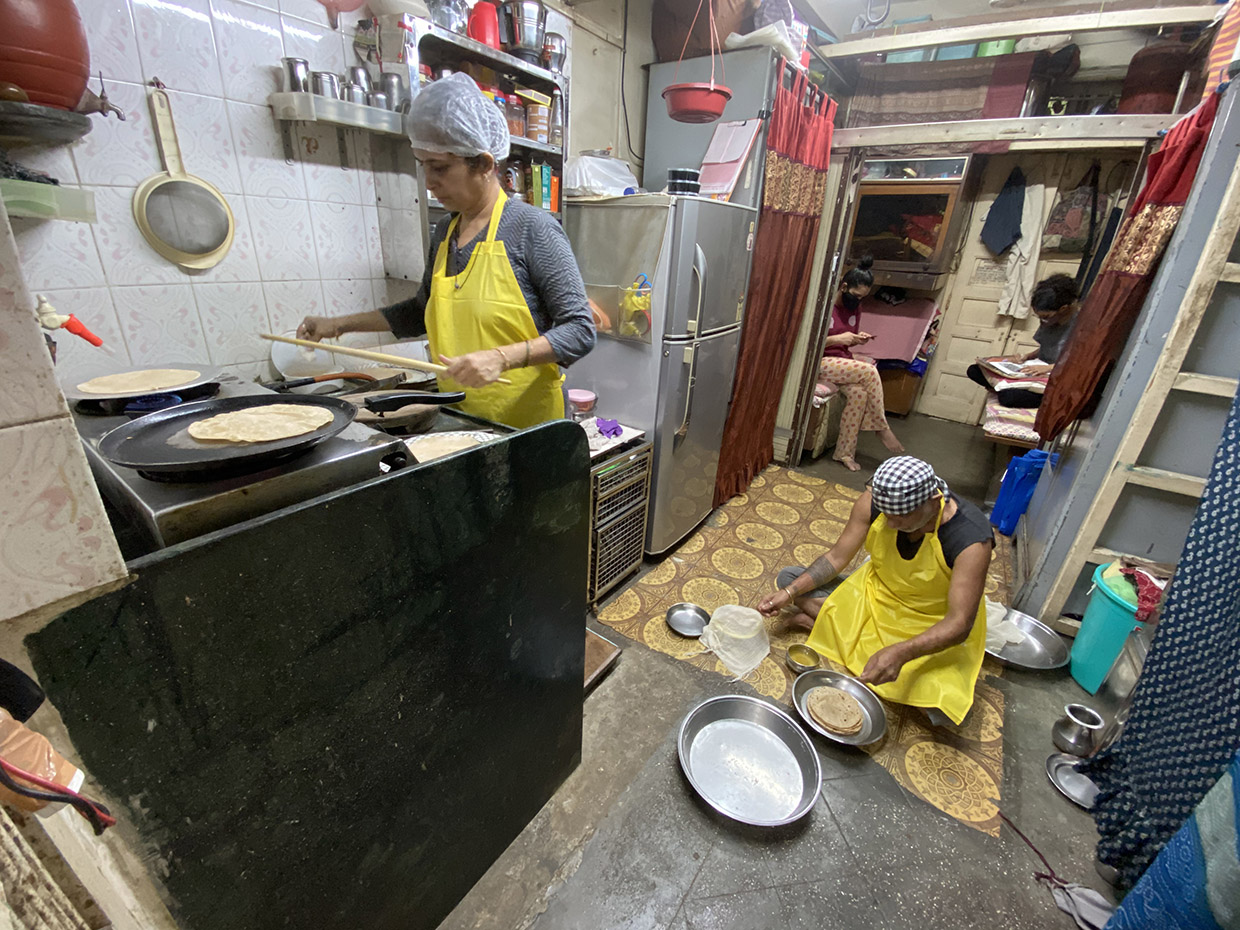 Vipul Gadhia helps his wife Urvashi knead the dough. Vipul’s transport business (of Ola/Uber and car rentals) came to a complete halt due to the lockdown. Now, he helps his wife make chapatis, softens them up with ghee and then delivers them on foot. 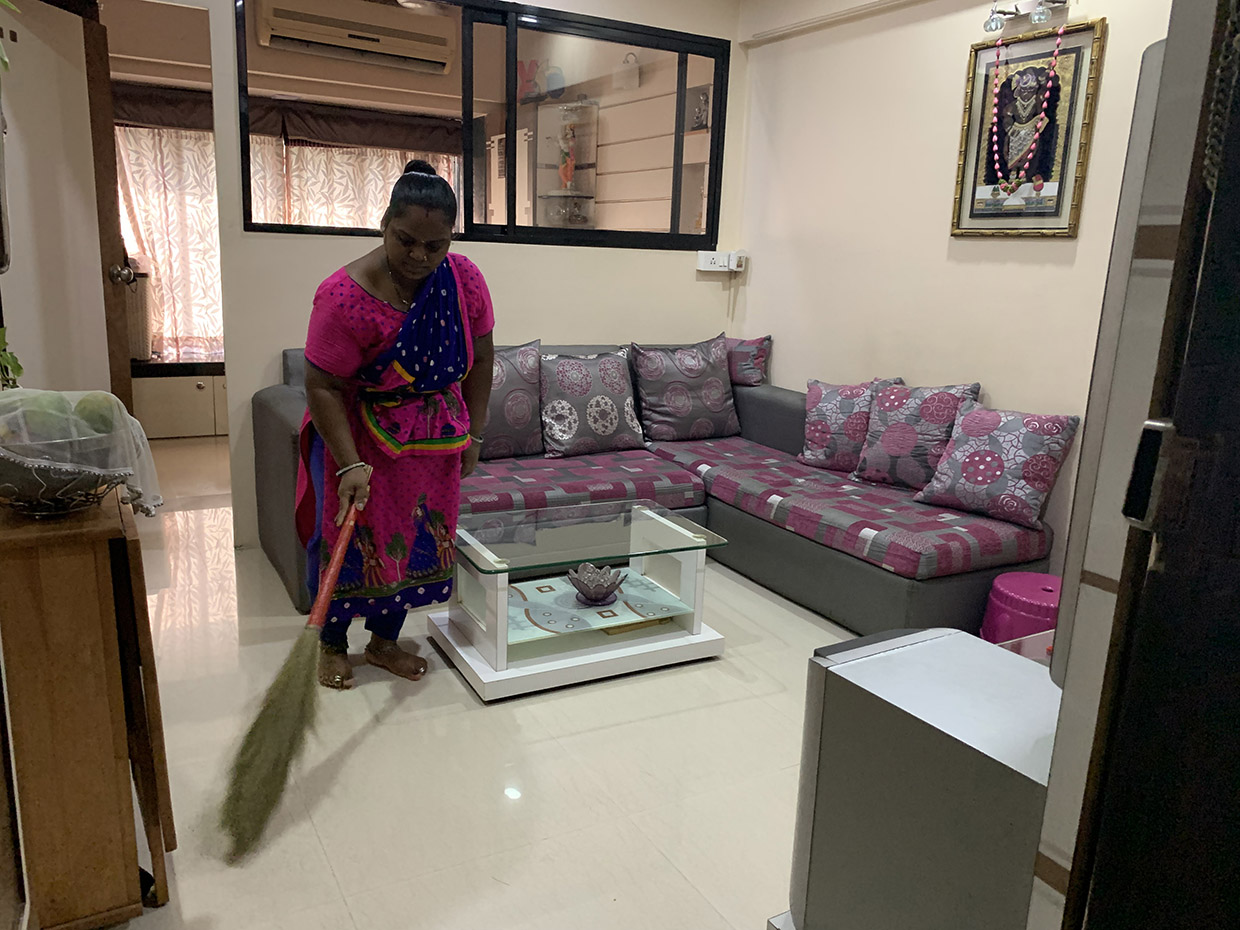 Surekha has been doing household chores at Harsh’s home since a year. Recently, she shared stories of her hardship, of having to forgo ration to buy a smartphone for her daughter’s online schooling. Heena immediately sponsored her ration and now Surekha gets added salary helping her make rotis and sweets. 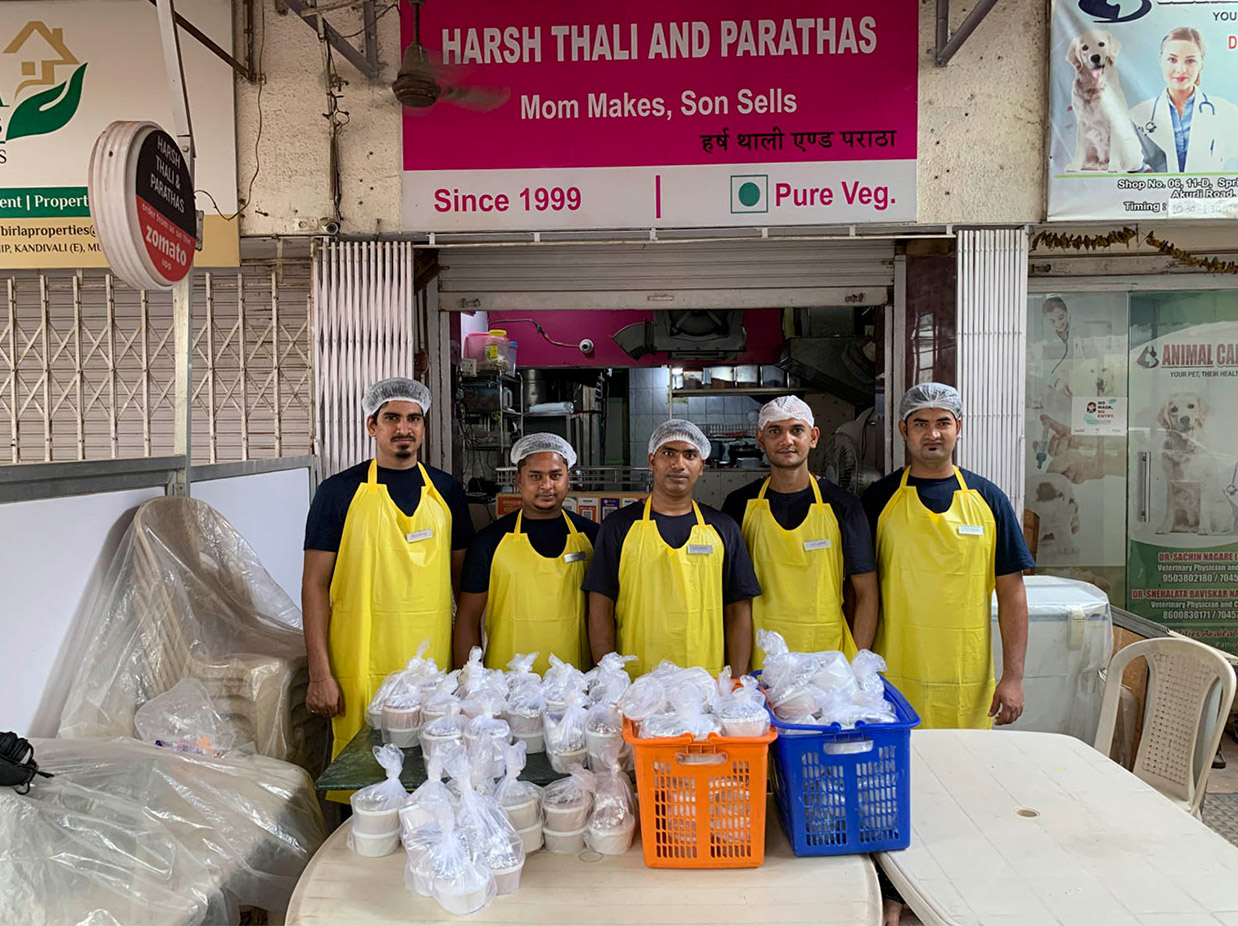 Five migrant workers from Bihar, Madhya Pradesh and Andhra Pradesh who work full time with HTP. During the first wave, three left for their hometowns with their travel allowance and a part of their salary. But since the situation back home was tough, they returned in four months. One of their regular customers, Abhinav Chaudhary, who later became their first donor, says: “I used to do charity in various NGOs for many years but when I came to know from my area friends that Harsh and his mom took great care of the staff (migrant workers), it really touched me. I thought let's donate money to them and I am super glad that it has become such an inspiring initiative now.” 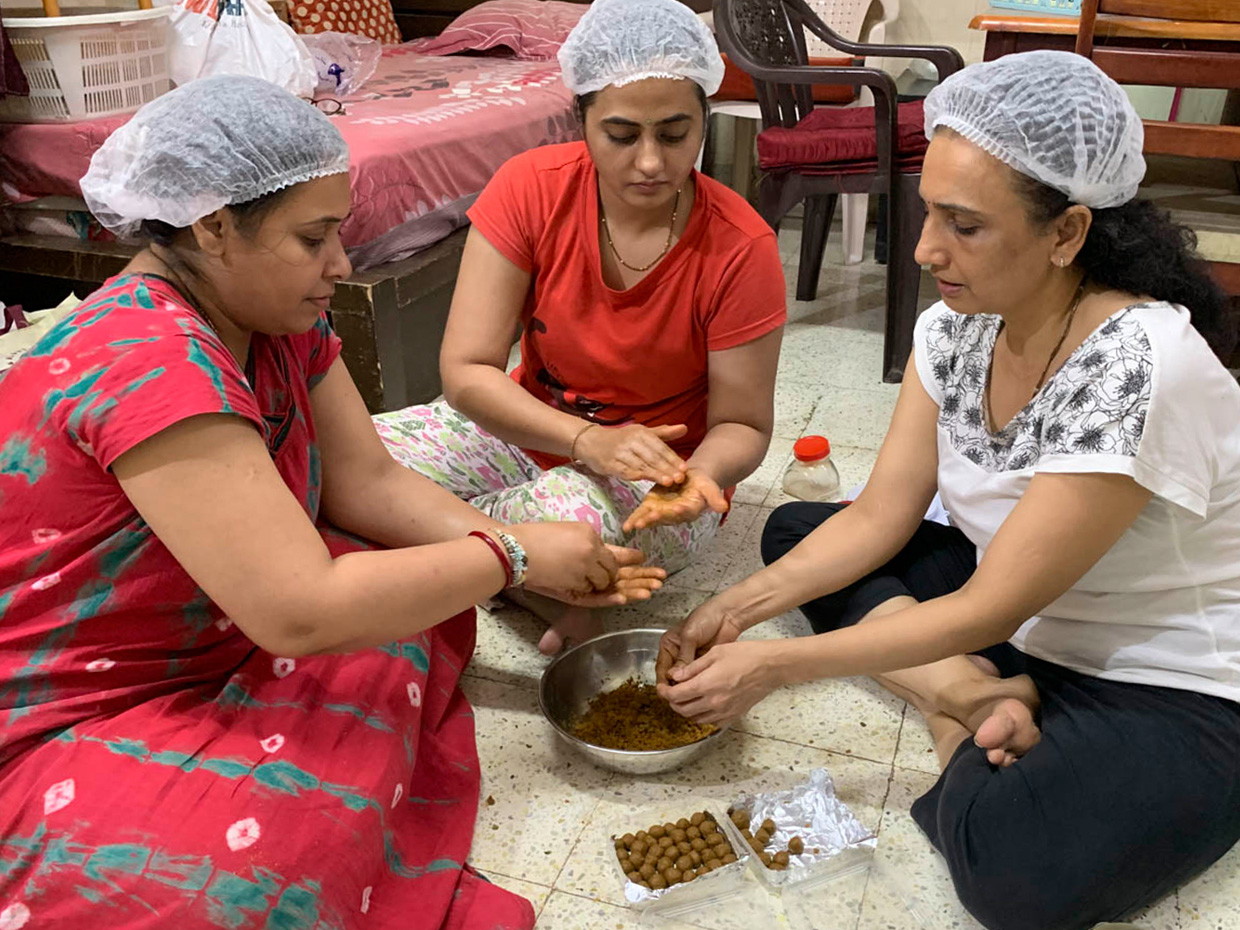 They say coming together is a beginning. Heena, Sheetal and Poonam team up to deliver immunity boosters and sweets to round off meals. Here, they’re seen rolling healthy laddoos made of dry ginger, jaggery, turmeric and pure ghee, considered crucial traditional elements of boosting one’s immunity 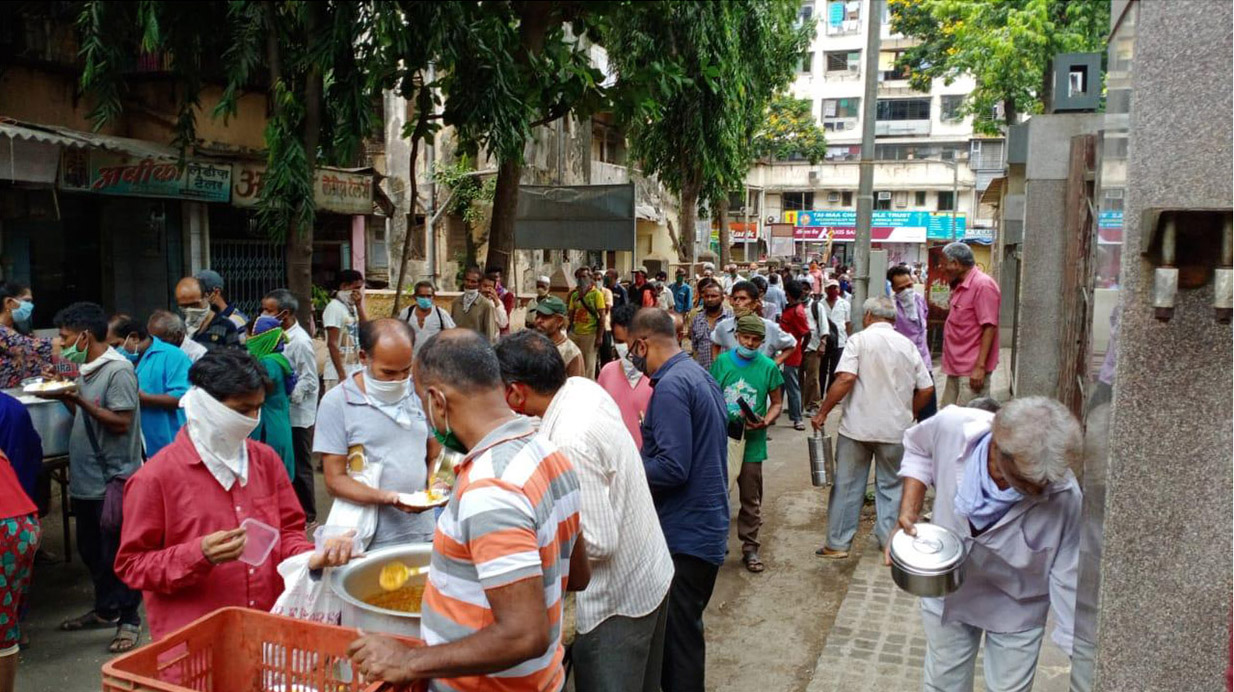 In the first week of May last year, when their first donor wished to give money to feed 100 people, Harsh was asked to identify the beneficiaries. After doing some research, he found a place outside gurudwara in Malad, in the western suburbs of Mumbai, where they fed the did the first 100 with a full meal consisting of roti, sabzi, dal and rice. 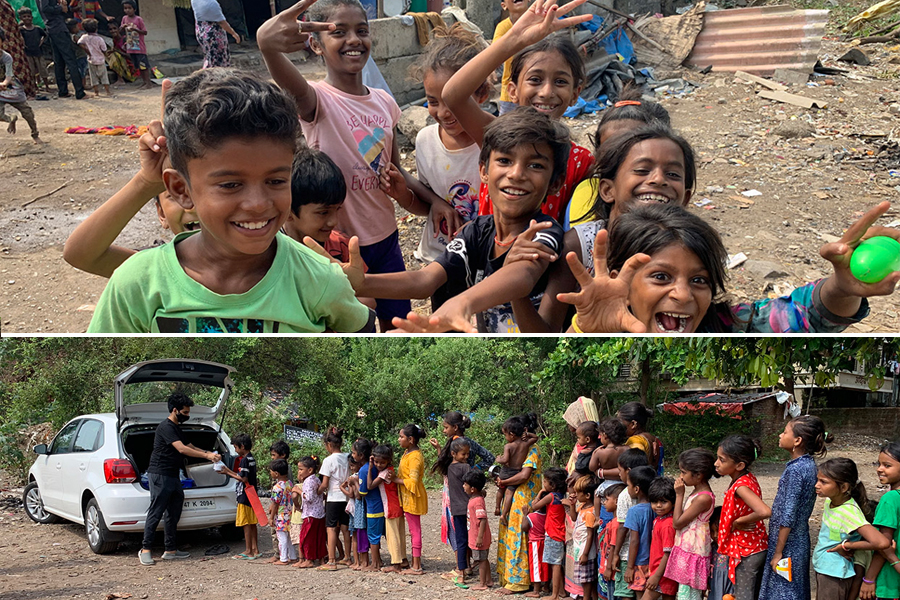 Local kids from Malad overjoyed after a meal from the mother-son duo. Harsh and Heena have organically raised Rs 21 lakh for these initiatives through Harsh’s social media posts in the past one year. Sometimes, donors wish to commemorate occasions like birthdays, anniversaries etc by feeding the kids, so they are welcomed to have a look at the process, from cooking to distribution. (Below) Harsh distributing food packets to 30 kids sponsored by a family that recently lost their loved one.All photos by Harsh Mandavia

Tweets by @forbesindia
Photo of the day: City of joy
News By Numbers: Paytm's $3 billion IPO is on the horizon