By turning himself into a marketing channel, Dwayne Johnson has figured out a way to make millions 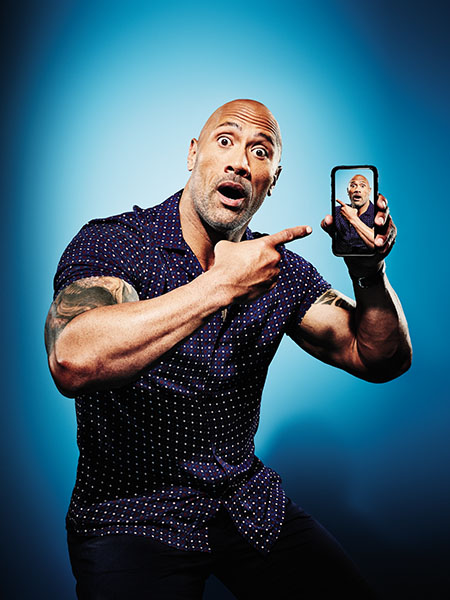 The bigger picture: By monetising his social media following, Johnson is changing the business formula for Hollywood studios and stars
Image: Michael Prince for Forbes


Dwayne Johnson clenches his granite jaw as he squints into the distance. A bead of sweat drips down his forehead before he throws back his head in a belly-shaking laugh. It’s a sweltering summer day in Atlanta, and The Rock is on set doing what The Rock does best. He licks his lips, delivers his lines with panache and swaggers his hulking 6-foot-5 frame out of the shot.

Johnson is rarely out of focus these days. In the last decade, the 46-year-old former professional wrestler has leveraged his indefatigable charm to become Hollywood’s most bankable star. His acting earnings last year—the vast majority of his $124 million haul—are the largest ever recorded in the 20 years Forbes has tracked the Celebrity 100 and nearly double the $65 million he earned in 2017.

“The number one goal is to create stuff for the world,” says Johnson. In other words, ubiquity. Besides a stream of movies, there’s his hit HBO series, Ballers, and one of the shrewdest strategies on social media. On Instagram, where he has more than 108 million followers, he delivers inspirational videos of himself talking directly to his iPhone, often in his travelling gym. Other posts—leveraging another 13 million Twitter followers and 58 million on Facebook—introduce movie trailers, show Johnson in development meetings and celebrate his “cheat day” pancake stack, all decorated with multiple hashtags and millions of likes.

Now he’s pioneering a new way to cash in on that digital fame. In addition to hefty $20 million up-front paychecks and cuts of back-end studio profits—starting with July’s Skyscraper—he’ll insist on a separate seven-figure social media fee with every movie in which he appears, according to people familiar with his deals. In other words, rather than have studios dump money into TV ads or billboards, their new paid-marketing channel doubles as their marquee star.

“Social media has become the most critical element of marketing a movie for me,” Johnson says. “I have established a social media equity with an audience around the world that there’s a value in what I’m delivering to them.”

Johnson still does the talk show circuit, the press tours and the other promotional duties expected of stars. But in stipulating that social media channels are separate platforms that require separate fees, Johnson is attempting to set a Hollywood precedent.

For The Rock, at least, the studios seem to have accepted this arrangement: Promotional spending on a tentpole movie can climb above $150 million and still not guarantee a blockbuster. A-list actors tapping their fan base augurs a cheaper, more targeted way for studios to promote a new movie.

“The star power that matters right now is the power of social media,” says Paul Dergarabedian, a senior media analyst at ComScore. For now, The Rock is alone in demanding cash for social media on top of his contract. His Central Intelligence co-star, Kevin Hart, pocketed $2 million from Sony for tweeting about his own films and others years ago, but the scale of the comedian’s overall paycheck is still dwarfed by Johnson’s.

Johnson has always had engagement by the ton. He followed his father and grandfather into professional wrestling, borrowing a piece of his father’s ring name, Rocky Johnson, to become The Rock.

A 2000 appearance on Saturday Night Live caught the eye of Universal executives, who gave him a cameo in The Mummy Returns in 2001. Impressed, the studio gave his tiny character its own spinoff, The Scorpion King, which went on to earn more than $165 million worldwide on a $60 million budget.

After a string of middling action movies and then three saccharine family movies (Tooth Fairy, anyone?), The Rock rebooted his career by doubling down on the brawn that first earned him a fan base. “My wrestling past has informed me in terms of having a real connection with an audience,” he explains. “It has to be audience first. What does the audience want, and what is the best scenario that we can create that will send them home happy?”

According to analysts, Johnson has high appeal in all four quadrants tracked at the multiplex: Male, female, over-25 and under-25.
For studios, he’s a dependable hedge against a North American box office that dipped 2 perent in 2017 to $11.1 billion. And his forte is exactly what sells abroad. (More than 64 percent of his box office grosses come from international audiences.)

As Johnson succeeded, he upped his business game. Five years ago, with his ex-wife and manager, Dany Garcia, he launched Seven Bucks Productions, geared at transforming The Rock from an actor into an enterprise. When Johnson appears in a movie, the Seven Bucks creative, production and digital team of eight work on every element, from developing the script to aiding production and helping guide its promotional rollout. The company also runs a YouTube channel and creates mobile content for Johnson’s social media platforms.

“Having a very large footprint helps us execute,” says Garcia, a former wealth manager who also runs a talent-management firm while overseeing Seven Bucks Productions alongside Johnson. “We would never do anything half-assed.”

The impact created extends to Johnson’s endorsements, which include Apple and Ford. With the addition of a former Droga5 executive, Seven Bucks Creative, a team of two, crafted Johnson’s Project Rock campaign with Under Armour, in which Johnson has a bestselling apparel line and a new branded set of headphones.

The natural progression: Projects where Johnson isn’t necessarily front and centre. “This is our next step,” Garcia says. “Let’s take ownership, develop properties and look into properties that we can retell.” Over the next few years, Seven Bucks will roll out The Janson Directive, starring WWE colleague John Cena, and Shazam!, a superhero action adventure.

The name Seven Bucks is an inside joke, a reminder of a bleak period early in his career, when he was cut from the Canadian Football League and arrived broke in Tampa in October 1995. “I had a five, a one and change,” he recalls of his net worth, adding that as an optimist, “I rounded up to seven.”

Now his net worth is closer to $165 million. It’s a journey that, he claims, puts him right on time. “What I’ve learnt from [Disney CEO] Bob Iger is when you’re going to do something right with global appeal,” Johnson says, “it’s going to take time—a decade, two decades, possibly more.” What will the next two decades look like? Fittingly, he speaks like a hashtag: “It’s limitless.”