The Cure For Road Rage

Los Angeles built the largest connected traffic network of its kind. Driving its streets has never been better. Honest 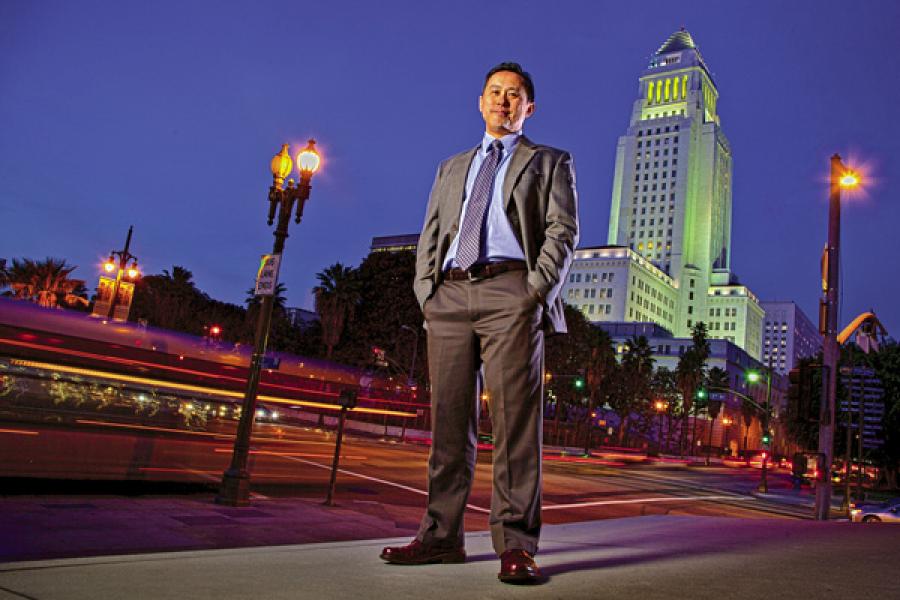 Image: Tim Rue for Forbes
IN THE SPOTLIGHT Edward Yu, a traffic engineer, in front of LA's city hall

Awry smile comes across Edward Yu’s face as he gingerly threads a city-owned Prius through a maze of cones in front of Los Angeles’ Nokia Theater. Traffic has been diverted so that workers can install a carpet for the next day’s People’s Choice Awards. “They put in a red carpet every day in this city,” says Yu. A bicycle zips by on the right, cars switch lanes to avoid the construction, and a passing light rail train blocks a line of drivers hoping to make a left turn. “Everyone wants a piece of the streets,” he says.

Yu is a soft-spoken engineer with great power: He sets the timing for all of LA’s stoplights. His department has to take it all in: Bikes, trains, big events and, of course, lots and lots of cars. Los Angeles has one of the nation’s worst reputations for automobile congestion, but that’s a simplistic way of looking at things. Its freeways are still the most congested in the nation, but LA has 36 times as many miles of surface streets as it does freeways.

Those streets, ranging from narrow roads winding around the Hollywood Hills to 10-lane boulevards that cut through canyons of office towers, are heavy traveled—the intersection of Sepulveda Boulevard and Venice Boulevard routinely sees 79,000 cars per day, more than many expressways—but rarely gridlocked.

This is thanks to a citywide data-gathering system that’s the largest of its type, run by Yu and his team of 35 engineers and 20 operators. The system—due to be complete early next year—is becoming ever more complicated as a city built for cars rededicates its streets to buses, trains, bicyclists and pedestrians.

Every second, 18,000 magnetic sensors embedded in Los Angeles’ roadways send traffic speed and congestion levels to a control room in a former emergency bunker four stories beneath a City Hall annex in downtown Los Angeles. A computer evaluates traffic-light timings at each of 4,114 intersections and sends out by the next second, minuscule adjustments to keep cars moving. An operator at an elevated desk in the centre of the room can summon up a real-time diagram of almost any intersection in the city.

A large digital leaderboard mounted on a wall shows intersections with unusually high congestion. If an intersection is under observation by one of the city’s 400 live cameras, the operator can pull up video to see why things have gotten so bad. “We figured out long ago that an engineer can’t scan 18,000 detectors continuously to see if a flashing red light is a problem,” says Verej Janoyan, bureau chief in charge of the design and operation of the city’s intersections. “This way, we’ve got one engineer overseeing 4,100 intersections.”The genius of the system—which the city calls Automated Traffic Surveillance & Control, or ATSAC—is that it’s both automated and adaptive. As congestion builds on one street relative to another, it adjusts traffic-light cycles to give more green time to the congested lanes. At the same time, ATSAC builds a rich database of historical traffic statistics used to adjust the timing of signals and to tweak intersection configurations across the system. ATSAC is smart enough to avoid overreacting to a momentary crush of cars. “Our system is designed around patterns,” says Yu. “We need to have lots of data to evaluate so that we don’t make changes that eventually worsen traffic.”

Los Angeles was the first city in America to control its traffic lights centrally when it rewired a handful of intersections near the Coliseum in 1984 in anticipation of a crush of Olympics traffic. The system proved itself quickly: Repeated studies since the 1990s have found that travel times fall by 15 percent near connected signals and motorists make 20 percent to 30 percent fewer stops, massive improvements for a cost of about $150,000 per intersection. Since then, the city has built the system outward along fiber-optic lines.The network has recently had to deal with the addition since 2010 of 187 miles of bike lanes and 18 miles of bus-only lanes that have special priority.

ATSAC has had to learn when buses are running late so it can extend green lights for them and to make the buses wait in traffic with everyone else when they’re ahead of schedule. New sensors in bike lanes can flip signals to green when a cyclist approaches, although they still have trouble detecting the most expensive carbon-fiber bikes.

Operators collaborate with event producers, too. Signals go into special cycles as Lakers games approach, and ATSAC guides limos to the Academy Awards. Yu says it was partly at the city’s insistence that the Oscars were moved from Monday night to Sunday night. The city developed the software inhouse, but it’s flexible enough that Los Angeles has sold it to other California cities and it is pitching it to Washington, DC. A cheque for $75,000 buys a license for the complete package of prediction and control software—a small fraction of what an outside consultant might cost. Thanks to data, L.A. has turned its liability into an asset.