The growth in domestic air travel has reduced this year 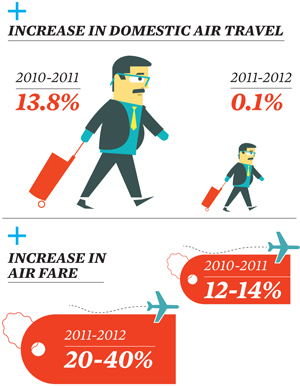 The state of affairs with airline companies such as Air India and Kingfisher may not be the only worrisome aspect about the airline industry. The past year has seen a dramatic drop in the year-on-year increase in the total number of domestic air travellers. In 2010-2011, there was a 13.8 percent increase over the previous year in the number of domestic air travellers. However, for 2011-2012, this figure is a mere 0.1 percent.

Reasons for this drop can be a dip in the total capacity (after Air India and Kingfisher discontinued several flights), and the ever-increasing cost of fuel. The latest 8 percent hike in fuel prices is expected to add another Rs 150 to Rs 200 to a passenger’s airfare. In 2010-2011, airfares saw a hike of 12 percent to 14 percent, while in 2011-2012 airfares saw an increase of 20 percent to 40 percent. But the airlines’ loss has been the Indian Railways’ gain, which has seen an increase of 15 percent—its highest ever—in bookings for AC coaches.

Tweets by @forbes_india
Click for your supper
Leading by example