Sportstar Fortunes and their Affairs Index

How many affairs does it take to make a multi-millionaire sports-star a plain old millionaire?

How many affairs does it take to make a multi-millionaire sports-star a plain old millionaire? That depends on the sportsman’s nationality, the sport he plays and whether his wife is willing to turn a blind eye to his activities off the pitch or the course.

Tiger Woods is alleged to have 19 girlfriends on last count and companies like Gatorade and Accenture have pulled out sponsorships that has cost him over $46 million so far. Woods shouldn’t be too concerned. Forbes still ranks him the number one sports brand by athlete with an estimated value of $82 million. 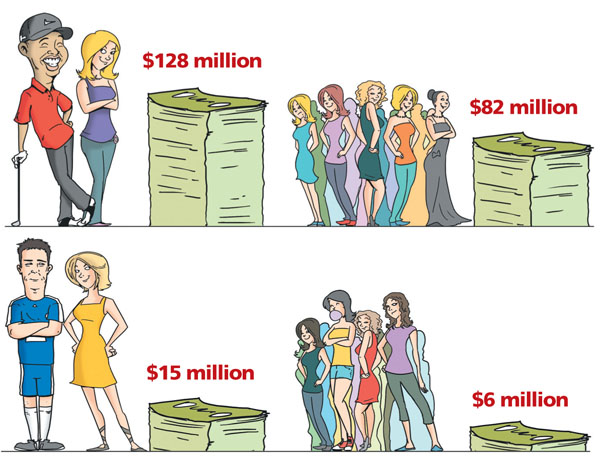 Illustration: Abhijit Kini
Former English football skipper John Terry on the other hand has a lot to worry about. With yearly earnings of only about $15 million he cannot afford the bad publicity. Ever since the 10 girls who have claimed to have slept with him, sponsors are threatening to pull out. Terry stands to lose $30 million over four years.

Tweets by @forbes_india
Beyond Greed and Fear: Stock Picking in 2010
What is Asperger's Syndrome?