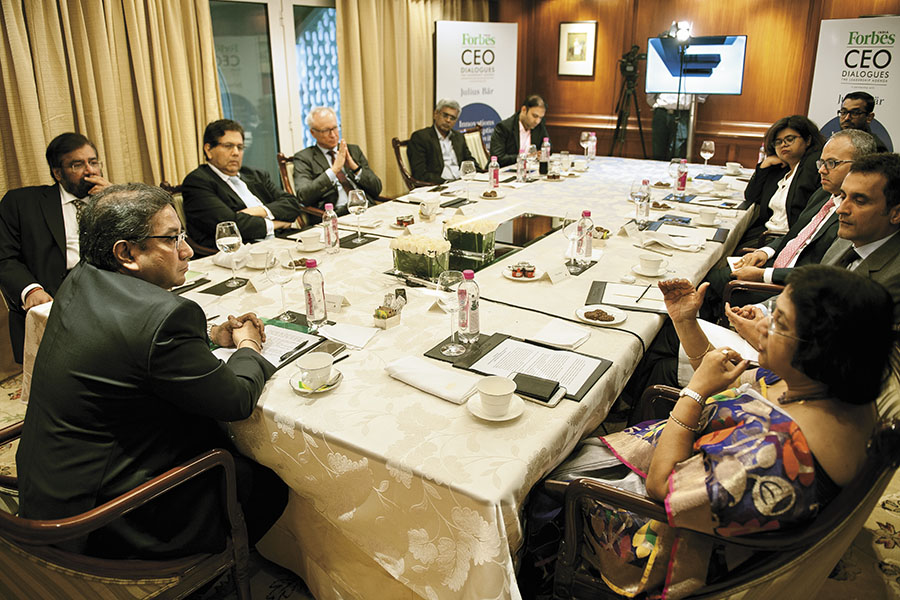 
A little over three years into its tenure, the Narendra Modi-led government continues to enjoy the confidence of corporate India. This was evident at the latest edition of the Forbes India CEO Dialogues held in Mumbai on August 4, where senior industry leaders expressed satisfaction with the way policies are executed and transparency heightened in governance and economic affairs. They were also impressed with the government’s reforms-driven agenda that promises to take the economy into a new phase of growth.

While the corporate leaders agreed that events such as the rollout of the Goods and Services Tax (GST), the Real Estate (Regulation and Development) Act (Rera) and demonetisation resulted in some hiccups, they felt those were only a blip on the radar and wouldn’t come in the way of growth in the long run.

Bhattacharya, in fact, said the government’s much-debated move of demonetisation was a “success”. According to her, it benefited the banking sector, increasing liquidity in the system and allowing lending rates to come down. Oberoi concurred. “People thought there would be chaos after demonetisation. But we have smoothly transitioned into the new system of a ‘more cashless’ economy,” he said. “The fact that the economy has survived the impact of demonetisation shows its inherent strength.”

Goenka, too, felt the new Indian economy derived its strength from what Oberoi alluded to—focus on transparency both in the functioning of the government as well as in economic dealings. “This is a well-meaning, hardworking government, which has innovative ideas for India’s challenges,” said the chairman of the Mumbai-based business house that has interests ranging from engineering to tyres and information technology. “The biggest change that I see is in terms of greater transparency at the top. Corruption at the highest levels of the government is down to zero, something that we could never dream of.”

The government’s push for a digital India and the use of technology has been the key reason in improving transparency. Whether the promotion of Aadhaar—a biometrics-based unique identification system for citizens—or a ban on high-value cash transactions, the emphasis on digitalisation of the economy has led to greater accountability, the panelists said. Bhattacharya pointed out that after demonetisation, the volume of digital cash transactions has risen by 230 percent compared to the period before it (prior to November 8, 2016). “We have covered about 2-3 years of digital adoption in a matter of 60 days,” she said.

Oberoi emphasised that since the introduction of Rera and the creation of a regional real estate regulator in Maharashtra, the process of registering his company and its various realty projects with the new authority has been seamless. “It took us less than a week to get a certificate. Isn’t it amazing? My people didn’t even have to go the government office. We submitted our application online and got the certificate,” he said.

Folger, the India head of the German luxury carmaker, offered a unique take on the effect of economic transparency that he saw on his business. He said that, previously, he came across a lot of wealthy individuals who lived in plush houses in upscale areas, but drove old cars, less luxurious than the ones they could afford. He would soon realise that they did not want to splurge on a fancy set of wheels and risk facing tax investigations. “But with increased tax transparency, there is much less to hide and people are more comfortable showing off their wealth,” he said.

Coming back to Rera, Oberoi, who runs one of Mumbai’s largest real estate companies, said it is a “boon” for the real estate industry, including developers and buyers. “It will give a much-needed confidence to homebuyers—that the biggest cheques they will write in their lives will be used only to build their dream home, and not to buy land elsewhere,” he said. “This will help in building trust and, consequently, improve the market [scenario] by bringing the customer closer to the developer.”

Bhattacharya said the SBI had, thus far, stayed away from lending to real estate players due to the lack of transparency in the sector and a tendency of some companies to divert funds from one project to another. Now, she added, following Rera, her bank will look at lending money to credible developers at good rates.

While steps like demonetisation and Rera have heralded a positive change, probably the biggest piece of tax reform that this government has put in motion is GST. Piramal, whose company is one of India’s oldest and largest homegrown luggage makers, felt it will have a beneficial impact on the economy by resulting in the formalisation of several unorganised players. Bhattacharya said the increased number of companies in the formal economy post-GST would also be able to access formal bank credit to fund future growth.

The strength of a country’s economy and future growth prospects are gauged by the health of its capital markets. And the “dream run” in the Indian capital markets, with a large volume of foreign investments coming in, reflects the confidence of global investors in the Indian growth story, said Gumashta. “A lot of money has come into the banking system while mutual fund assets have doubled,” Gumashta said. “Around $30 billion of foreign direct investment has come into India over the last three years.”

However, despite the positives that have emerged thus far, reforming the country’s economic landscape is an ongoing process and an unfinished agenda for the government. A lot of challenges are yet to be addressed, one of which is ensuring that the future economic growth isn’t jobless. Bhattacharya pointed out that while there is a lot of focus on fostering entrepreneurship, more needs to be done to develop nodal industries that have the potential of creating a higher number of downstream jobs.

The advent of new-age digital technologies and increased automation in traditional manufacturing and service processes are threatening existing jobs as well as posing challenges for job creation in the future. Goenka said that if the youth of the country fail to find jobs, it could lead to social unrest. “The SME (small and medium enterprises) sector has also been hit badly due to GST and demonetisation,” Goenka said.

Piramal added that cost pressures due to cheap imports from China are taking a toll on small-scale players in the garments and luggage sectors. As a result, a lot of companies are importing these goods rather than employing people to make them in India.

According to Bhattacharya, another hurdle that India needs to overcome is removing infrastructure bottlenecks that lead to inordinate delays in the movements of goods. Goenka said some of the risks to India’s growth story include excessive reliance on one person (PM Modi) to drive the agenda, the lack of a political alternative to balance the scale of governance, and religion taking precedence over economic issues in certain parts of the country. Gumashta pointed towards geopolitical risks that are a result of India’s relationship with its neighbours like China and Pakistan.

But industry leaders at the Forbes India CEO Dialogues collectively believe that the future of the country looks more bright than bleak. Gumashta estimated demand (for goods and services, which has slackened of late) to revive in 2018 followed by the capital expenditure cycle in 2019. If these lead to double digit growth thereafter, it won’t be surprising, said Goenka.

(This story appears in the 15 September, 2017 issue of Forbes India. To visit our Archives, click here.)