Is Health Insurance Good for You?

The big questions on the need for a cover 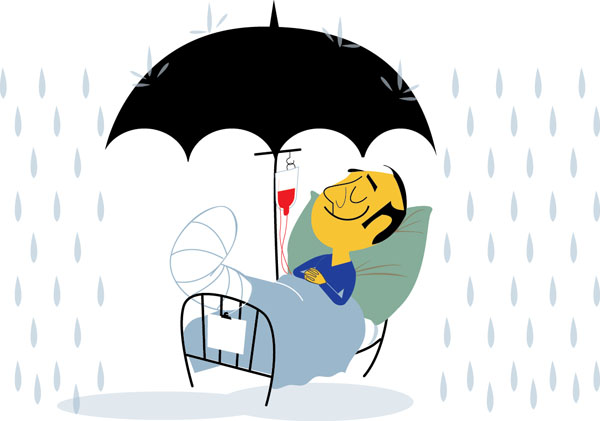 Illustration: Vidyanand Kamat
Is health insurance good for your health? One way to answer this would be to randomise people into a group that receives insurance and another that doesn’t, and see which group is healthier over time. The only such study was done back in the 1970s by the RAND Corporation in the US. Participants were randomised into a number of insurance schemes that had zero to 95 percent co-payments on health costs (with a cap on the total health spend across groups).

The researchers found that while there were no significant differences in health outcomes, those who had high co-pays (bad insurance) used far fewer health services than those who had no co-pays (great insurance). A casual conclusion being that health insurance has no impact on your health. Nobody believed that, so insurance grew as an industry, but so did co-pays.

Dr. Michael McWilliam of Harvard University believes health care has improved over the past decades to now mean that more health care translates to better health. He concludes in a widely cited review paper that “the health consequences of uninsurance are real.” However that doesn’t end the debate; his conclusion is based on a literature review, far from the power of a randomised control trial.

Why don’t my parents have health insurance? Dr. Amitabh Chandra, a health economist from Harvard’s Kennedy School of Government, asked that question at the 5th Health Insurance Summit of the Confederation of Indian Industry recently held in New Delhi. When I repeated a version of the question to Damien Marmion, chief executive officer of Max Bupa Health Insurance, he cited two reasons, “Awareness and services.” In India, only 60 million people have commercial health insurance while another 240 million people are covered by social government schemes.  That leaves over 70 percent of the country with no coverage. An important conclusion of the RAND study was that when poor people had bad insurance, they went without medically necessary treatment.

Malti Jaswal, an expert in health insurance and the former CEO of a leading TPA says, “In India we save for a rainy day, though there could be better ways to save for that rainy day than by keeping our savings in the bank.” She blames the low penetration of health insurance on poor insurance literacy.

How do you pick an insurance plan? There are Web sites such as policybazaar.com that detail the offerings by the various insurance companies. You could also visit the insurance regulator’s site, irda.gov.in , for a listing of all insurance companies and their Web sites. Finally, there are insurance brokers who can help companies find the best product for their employees.

“Remember to pick a plan that matches your lifestyle,” advises Jaswal. “If a health expense of Rs. 3 lakh won’t pinch you, you should seek coverage for an amount that would.”

Tweets by @forbesindia
Manufacturing Slump Across the Globe
Indian Banks: Healthy, But Precarious