Indian banks have brought bad loans down to 2.4 percent over 10 years, but now they need to be careful

A recent study by Boston Consulting Group (BCG) found that bad loans fell from a peak of 11.4 percent in 2001 to just 2.4 percent in 2010, showing the efficiency of management of capital. In fact, Indian banks have been performing better in controlling defaults with only 0.6 percent of loans handed out last year turning sticky, compared to 1 percent in the US and China. Indian banks also have a cost-to-income ratio of 47 percent, which is lower than Germany, France and the US. 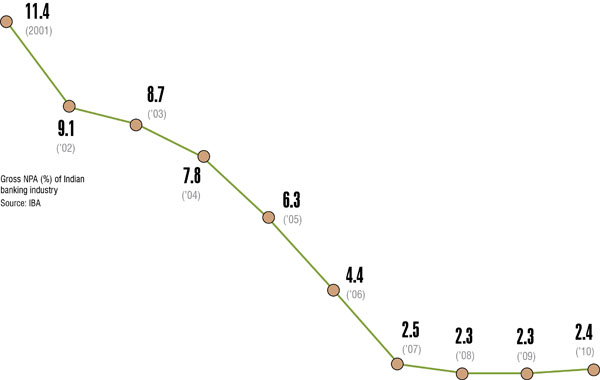 The main reason for the robustness was the banks’ focus on return on investment, cost-to-income ratios and the efficient use of technology. BCG expects that by 2025 the Indian banking sector will be the third largest in the world on assets, behind China and the US.

But now stress signals are showing up. The Reserve Bank of India expects non-performing assets (NPA) to inch up to 2.9 percent during 2011. IDFC Securities, a broking firm, recently said at least 17 percent of loans are stressed and some could go bad. Total bank credit to the industrial sector stands at about Rs. 17,60,600 crore.

“Credit to power and infrastructure sectors has grown 40 percent in the past four years and the proportion of the same has gone up to 14 percent in terms of total credit offtake, which has created additional risks to the banking segment,” says Ajay Parmar, head of institutional research at Emkay Global.

State-owned banks have a higher allocation to small industries, which could get hurt early if there is an industrial slowdown. Additionally, the central bank’s battle with persistent inflation is raising the cost of money, pressuring net interest margins that are expected to continue to narrow for at least another two years.

But no one is pressing the panic button yet because there is no dearth of liquidity in the system. Says Rajeev Thakkar, CEO, Parag Parikh Financial Advisory Services, “If margins are high then NPAs are not a cause for concern... There is a difficulty in the system but we are certainly not into recessionary territory.”

Tweets by @forbesindia
Is Health Insurance Good for You?
Social Power of The Republic of India