The world needs to take a breather from the relentless inflow of information, and consume it more deliberately. That’s the key to better decisions 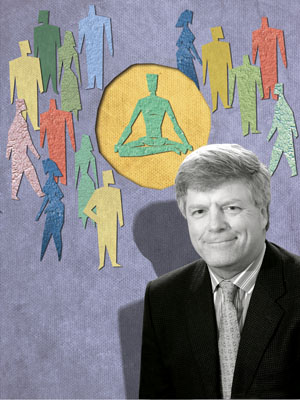 A regular name on most lists of top consultants in the world, Thomas Davenport holds the President’s Chair in Information Technology and Management at Babson College, Massachusetts. With a PhD in sociology from Harvard, Davenport has been involved with at least 10 books in various roles as author, co-author or editor. He is among the pioneers who first started talking and writing on business process re-engineering and knowledge management. He is much sought after as a speaker as well.

What the world needs now is deliberation, sweet deliberation. The definition of that term I like best is: …weighing and examining the reasons for and against a choice or measure; careful consideration; mature reflection…

Deliberation would seem to come naturally to sentient beings like humans, but we live in a world in which the capability to deliberate is vanishing. We receive information faster than we can absorb and react to it. We multitask, employ multiple media, and surf rather than dive into content. We skate on the surface of a vast information ocean, and seldom have the time or interest to penetrate its depths.
Yet there is little evidence that our relentless pursuit of information and mental stimulation has helped us make better decisions or live better lives. Recent research suggests, for example, that multitaskers are worse at noticing important aspects of their surroundings than those who consume information more deliberately. When we try to combine tasks like talking or texting on mobile phones with driving, we are much more likely to have accidents. Our frenetic mental lives increasingly look like unproductive churn.
The alternative is calm deliberation. This is hardly a new idea, of course. Eastern religions and philosophies have long counselled seekers of truth to turn inward and to heed their own calm thoughts. That ancient wisdom, however, has been lost in the cacophony of modern technology. Only a few decades ago there were no real alternatives to deliberation; there was no 24/7 multi-channel information stream. But as information sources, media, and technologies proliferated, many have gravitated toward them like moths to a flame. As a result, many citizens of contemporary societies have given up a large measure of serenity.
Deliberation is also the key to effective decision-making in our business and personal lives. The careful weighing of alternatives is one of the most important factors in an effective decision process, yet one which is often ignored. Many organisations and individuals fail to identify any decision alternatives, or don’t consider them seriously. Deliberation can help us select from a wide variety of decision approaches, and then to apply one or more to yield a reflective decision outcome. How many people should be involved in the decision? What are their key decision roles? What IT tools and data can help with a decision? These questions can only be answered through deliberation. Indeed, the best possible decision processes must begin with deliberation on how to decide.

How can deliberation be consciously advanced in the lives of people and organisations? First, people need to make the conscious choice to disengage occasionally from the information stream. Everyone should have vacations, weekend breaks, and periods during the day in which they do not receive electronic messages. Organisations should encourage those periods, so that no one will feel pressure to communicate. During those times, instead of focussing on the information being delivered through various devices, focus on human relationships and the meaning of life. Think about what you are feeling and observing. As the 1927 prose poem Desiderata begins, “Go placidly amid the noise and haste, and remember what peace there may be in silence.”
The world will only become more fast-paced and cacophonous over time. One more email, text message, or web page is unlikely to bring satisfaction. We can let ourselves be swept along with the tide of shallow information, or we can make a conscious effort to return to time-honoured methods of bringing inner peace and happiness.