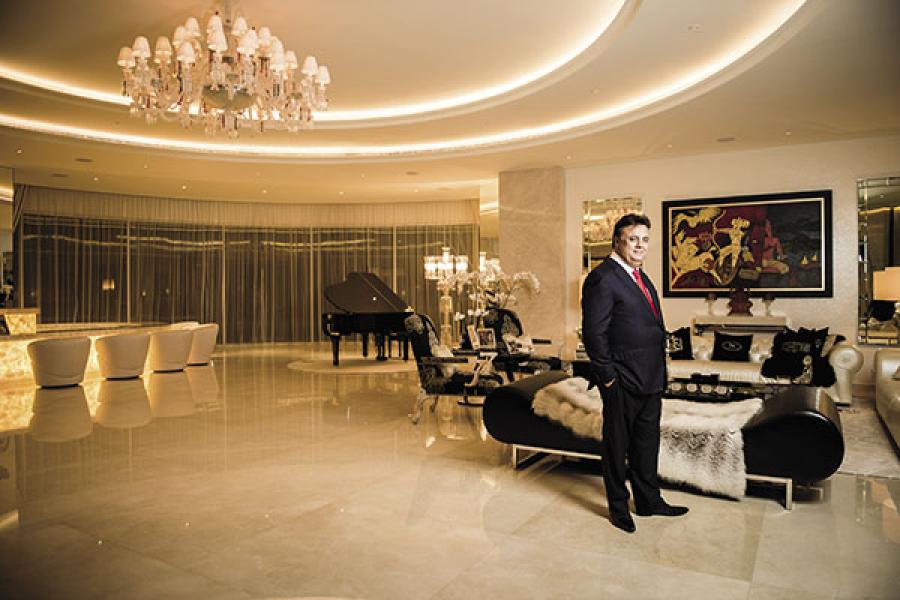 The stunning mansion in Dubai’s Emirates Hills gated community is crammed with countless frills, some customary, some not. The eastern European shepherd guard dogs, the liveried staff and the line-up of shiny Ferraris, Rolls-Royces, Porsches and Lamborghinis in the indoor lot set the tone. Then there is the exotic-bird-filled aviary, the bowling alley, the nightclub, the automatic car wash, the outdoor singing bar frequented by the likes of Lionel Richie and, for the deepest of pockets, a basement casino. The tables come alive when Sunil Vaswani, chairman of $3.72 billion (revenues) Stallion Group, headquartered nearby, hosts his famed soirees.

Dazzling as his glamorous parties are, Vaswani, boyish-faced at 52, is in fact inconspicuous in Dubai’s Indian-expatriate-dominated business circles.

Not so in West Africa, where his conglomerate, Stallion Group, has most of its operations. They also reach from Turkey to Thailand (18 countries), through 54 business entities engaged in commodities, autos and frozen food. Stallion holds considerable sway in Africa’s largest economy, Nigeria. There it has the largest cold-storage facilities, with capacity of 130,000 metric tonnes and full backup power, phenomenal infrastructure in power-and cold-chain-deficient sub-Saharan Africa. It is the largest frozen-fish distributor and a rice market leader in Nigeria and its region, importing in bulk from Asia, bagging and branding for market. Last year Stallion imported a fifth of Nigeria’s rice consumption. It is the sole distributor for global automakers like Nissan in Nigeria and parts of sub-Saharan Africa. In December Nigeria’s government cited Stallion, alongside the sugar and cement operation owned by Africa’s richest man, Aliko Dangote, as the top two conglomerates contributing to its economic development.

On Lagos’ upscale Victoria Island, Stallion’s presence manifests everywhere. Side by side on the northern end of Akin Adesola Street are four automobile showrooms—Porsche, Volkswagen & Skoda, Nissan and Audi—each a Stallion client. More ambitious evidence of the group’s automobile vision is a multi-line assembly plant in a sprawling complex along the highway linking mainland Lagos with the port city of Badagry. This part of the city is decidedly not Victoria Island: Run-down residential and industrial estates, warehouses and the concrete slabs of what is to be an intra-city light rail.

“We are deeply entrenched in the daily lives of people in Western Africa,” says Vaswani, a restrained figure in his customary business suit. Born in Jaipur, he grew up in Africa and holds Nigerian and British passports. Vaswani cuts more style lounging on the Fendi white leather sofas in his massive living room in Dubai. He landed in the UAE as a result of a legal imbroglio that led to his deportation from Nigeria in 2003, allegedly for duty evasion (the government found no wrongdoing, and the family returned after the situation was resolved). Brothers Haresh and Mahesh oversee commodities and automobile businesses in Africa, though all three have bases and adjacent homes in Dubai. Sunil, who lives on multiple continents and sails the Mediterranean each summer in an all-purpose luxury yacht, holds a 100 percent stake—and the controls.

“Vaswani is balanced and trustworthy—he takes bold decisions and is determined to succeed,” says Mike Whitfield, managing director of Nissan South Africa. Some still view Vaswani as a “foreigner” and pit him against the likes of Dangote. That he created the group in one of the world’s most difficult business terrains—beset by brownouts, the Boko Haram insurgency in the north and a yo-yoing system of government, could hark to the risk-taking ancestry of the Sindhis. A clansman in Vaswani’s own Emirates Hills is fellow Forbes listee (No. 17) Micky Jagtiani.

In difficult Africa, businesses often import rather than locally produce the continent’s requirements. Nigeria exports crude and imports refined petroleum; it has rich iron ore deposits but imports most of its steel; a lot of gas is flared, but all of its fertiliser is imported. Besides importing fish and rice, Stallion last year supplied 120 million sackfuls of farm fertiliser from the Baltics.

Nigeria’s economy and its young population (a good third under age 15) is a long-term bet, but, according to the World Bank, half of its 170 million people still live on less than $1.25 a day. The 40 percent dip in Brent crude prices of the past year has punctured the oil boom in Nigeria, which relies on its drilling for two-thirds of its revenue. Imports tax foreign exchange, to which recent governments have woken up. “There is an urgency to create a value-added economy, and Stallion is in the forefront of that through its auto operations,” says Whitfield of Nissan. 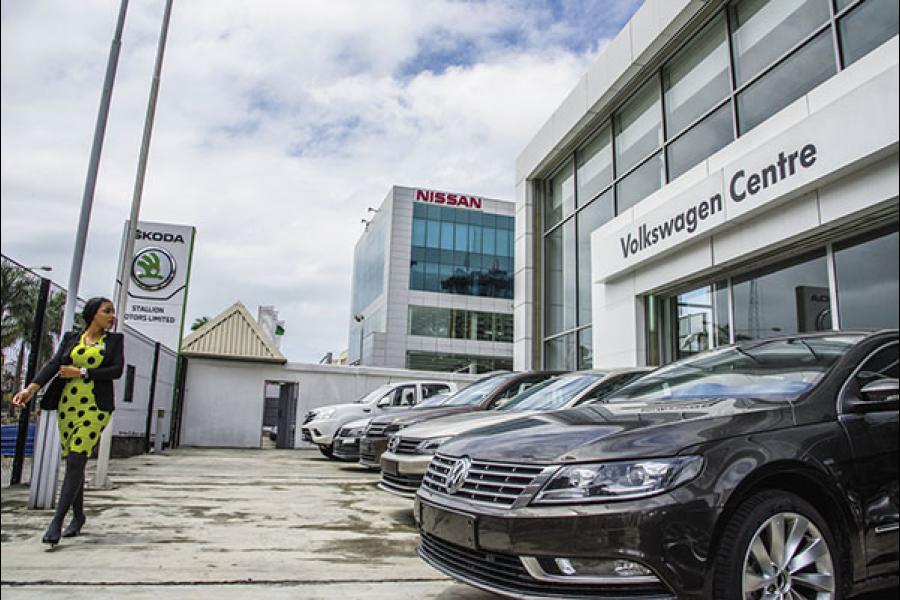 Image: Emeka Okereke for Forbes
“We are deeply entrenched in the daily lives of people in Western Africa”: Stallion dealerships in Lagos

“Africa is a complex jigsaw puzzle whose pieces are just beginning to fall into place; we plan to invest a further $9 billion in the coming years to help Western Africa,” Vaswani declares. The strategy: To grow, build or make on the continent, not be a mere go-between. He wants Stallion to expand steel, farming and auto operations and get into fertiliser production, power, roads and health care—all sectors in need of investors. “We want to be the Africa specialist; we want to partner with credible global names and African institutions,” he says.

Nabbing a Blackstone or a Carlyle from private equity would also leave Vaswani less prone to buffeting by political winds as in Nigeria’s past decade—he was deported under president Obasanjo, then brought back under Yar’Adua and enjoyed a golden period under Goodluck Jonathan. Things are still uncertain in the new Muhammadu Buhari era, but Vaswani is thinking big: “Our plan is to supply roti [food] and makaan [home or shelter] for Western Africa’s 340 million people… but not kapda [clothing], as we can’t compete with Chinese prices,” he says.

In 1954 Vaswani’s father, Sunderdas, migrated to Africa to work as a shop assistant, first in Ghana and then in Nigeria. He thrived and years later began opening stores for imported sundries under the name Jacky Impex. Sunil arrived in Nigeria as an infant in 1963, and his brothers were born there. He went to college in London, returning at 21 with a degree in finance and accountancy. Jacky Impex’s slowing operations did not inspire hope. “I told Dad that we needed to switch and get into what the country most required—shiploads of food,” he says. “The turnaround in commodities like rice, wheat and sugar would be faster and margins higher because of high demand and short supply.”

Stallion’s car distribution began in 1989 and grew until 2003, the year of the deportation from Nigeria. It was all rubbish, Vaswani says: “Certain rivals wanted me out of Nigeria so they could monopolise sectors. They engineered my family’s exit through trumped-up allegations.”

The family’s exile in Dubai turned out to be a blessing. “The anger,” Vaswani says, “made me work so hard, I was driven and told myself I will never allow another competitor to do this to me again.” The siblings returned to Nigeria in 2007, only to be banished again in 2009. This time they challenged the action in the courts, got a government apology, damages and a new welcome. Vaswani became a Nigerian citizen in 2010.

Stallion acquired a defunct Volkswagen assembly line in 2010 and began assembling buses for India’s Leyland. A year later Stallion began lobbying the Nigerian government to buoy its domestic auto industry. “If Brazil with a similar population could kick off a 3-million-cars-a-year domestic industry by levying high import duties, why can’t Nigeria?” was Vaswani’s argument.

By 2013’s end the Jonathan government had announced a National Automotive Industry Development Plan with import duties of 20 percent to 70 percent on vehicles. Stallion’s rivals cried foul, saying it had received an inside tip-off and had flooded the market with imports. In mid-2014, with the backing of Carlos Ghosn, Stallion got its foot in the factory door, rolling out a ‘Nigeria-made’ Nissan, a first for the global automaker in Nigeria. Hyundai vehicles and Iveco (Italian) trucks followed.

“Nigeria and Pakistan are the only two countries with over 100 million people without a domestic car-manufacturing industry,” Vaswani says. The acquisition of an integrated steel plant, one of only two in Nigeria, feeds into his goal of building a low-cost “people’s car” with Chinese technology, a 1.6-litre engine, sub-$10,000 sedan that will cater to the market of an annual half-million used-car buyers. Sounding like one of his lot men, he says: “It will come with a tempting single-digit interest rate and a service package.”

Agriculture can follow suit: Stallion has set up rice mills and is working with farmers to seal supply. It is adding aquaculture to fish imports. In the works are mining, fertiliser production and a power project. “We are keen on big ideas that make it worth our effort,” says Suresh Vaidyanathan, the group’s chief financial officer and Vaswani’s shadow. “Execution risk is very high in Nigeria, but Mr Vaswani always pushes the group into taking bigger risks.”

Back in Dubai, where he repairs to most weekends to spend time with his family, Vaswani declares: “I want Stallion to play a key role in Nigeria’s and Western Africa’s industrialisation as well as its green revolution.”