K.G. Balakrishnan, Chief Justice of India, was once a member of the downtrodden class. Today, he is their voice

In 1997, the Kerala High Court created ripples across the nation by ruling that state-sponsored lock-outs, or bandhs, were illegal as they interfered with individual liberties and caused substantial economic loss to the nation. Until then, several state governments have behaved as if it was within their right to shut down the society whenever their political masters wished. The ruling broke that cruel comfort. A decade later, the Supreme Court used the judgement in its own ruling against bandhs.
The man who delivered the Kerala judgement was none other than K.G. Balakrishnan, who later became India’s first chief justice from the Dalit community. The judgement not only empowered the silently suffering masses to rise against the culture of forced bandhs, but also showed the sensitivity of a man who had come from an underprivileged background and used the judiciary as a tool to fight for civil rights.

It was quite natural, then, for the present dispensation in Delhi to pick Balakrishnan to lead the most ambitious reforms of the judiciary in independent India. The law ministry has come out with a roadmap to reduce the average span of litigation from the current 15 years to three years, and entrusted Balakrishnan with the task of achieving that. 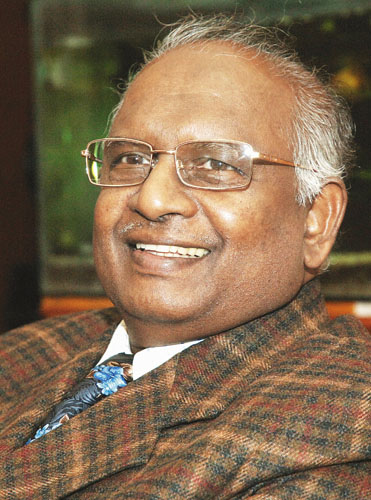 Image: The Hindu Archives
K.G. Balakrishnan is the first Dalit chief justice of India
It is an irony that “Bala”, as a young Balakrishnan was known to family and friends, was supposed to become a doctor and not a lawyer. His father, K.J. Gopinathan, desperately wanted one of his eight children, preferably Bala, the second one, to take up medicine. This was his hope of emancipation for the family, which belonged to the ostracised “Pulaya” caste and had little access to education.
But fate made Balakrishnan a healer of a different kind. He studied law because he saw that as an opportunity to cure social ills. A successful stint in practice elevated him to judicial ranks and throughout his career, Balakrishnan’s rulings have restored the equality of people wherever it had been damaged.
India’s courtrooms are littered with examples of delay and dithering. And this tardy legal process with its current backlog of over 30 million cases has already taken a huge toll. The old adage “justice delayed is justice denied” rings truer nowhere else. “We cannot have this much of delay at any cost. It should be reduced,” a very worried Balakrishnan had said at a recent conferene in Bangalore. He warned policymakers that people will revolt if the delays continued and the legal system would collapse under the pressure. Not the kind of words that any judge would make. And that passion is what sets apart Justice Balakrishnan.
However, the task ahead is immensely difficult. The initiative provides for a National Arrears Grid to compile accurate data about pending cases. It also includes temporary appointment of more high-court and lower-court judges to ease the congestion. But convincing everyone will be a tortuous affair. “The vision statement, it is good as a set of goals and expectations – it helps fix your sights a bit – but one should not only be content with vision statements,” says constitutional expert Fali S. Nariman. “You have to have a way to implement those goals.”
From the backwaters
His poor background and the lack of schools willing to take a Dalit child in, young Balakrishnan would walk five kilometres to the government school every day. He was a good student. In the 4th grade, he got a double promotion and went straight to the 6th grade. His father, a humble clerk in the district court, was delighted. He earned just Rs.15 each day, but he wanted his children to have the best education, and his son’s academic success was a step toward fulfilling that goal.
“Though my father was only a matriculate and my mother had her schooling up to the seventh standard, they wanted to give their children the best education,” Justice Balakrishnan recalled in an interview.
Balakrishnan worked his way up without the benefit of reservations; in educational institutions or in government jobs. “In fact, when I joined the service, I didn’t deserve any sort of reservation. At that time, the benefit of reservation was not even available. But there were many people who helped me when the caste prejudice was at its peak,” he says in an interview published in 2007.

Balakrishnan earned his bachelor’s degree in law in 1968. He went on to secure the first rank at the master’s course in law from the Government Law College at Ernakulam. His teacher, T.P. Kelu Nambiar, remembers Balakrishnan vividly. “He was a very quiet student. You couldn’t always feel his presence in the room. But I soon realised it was not because he was lost in his own world but because he was very attentive and studious.”

He steadily rose through the ranks to be appointed a judge of the Kerala High Court in 1985 and to the Supreme Court in 2000, after serving stints as Chief Justice of the Gujarat and Madras high courts.
GENTLE GIANT
One of his landmark judgements came in 2001, when Justice Balakrishnan ordered that the mid-day meal program in schools become a statutory requirement. This order brought relief to millions of poor children who had to discontinue their studies due to poverty.
“He is very soft-spoken and his judicial acumen is very good, very firm. The softness should not be taken as an example of his weakness. And generally he has [a] smiling face, even in court. He is a very pleasant person. Even foreign lawyers and judges who meet him are very impressed with his simplicity and softness and clear vision,” says Lalit Bhasin, former chairman of the Bar Council of Delhi and managing partner of law firm, Bhasin & Co.
At the same time, Justice Balakrishnan has had his share of controversies. He was criticised of having dithered in the affair of Justice Dinakaran, the chief justice of Karnataka High Court. This is a case about allegations of corruption against Justice Dinakaran and the protest against his elevation to the Supreme Court. Now an apex court collegium is looking into the matter, but some say Justice Balakrishnan should have acted quicker. For former Chief Justice of India J.S. Verma, Balakrishnan’s indecision has “reduced the credibility of the judiciary.” Similarly, Prashant Bhushan, a civil liberties lawyer, doesn’t think Justice Balakrishnan has any interest in judicial reforms at all. “If he had, he would not pushed for appointment of Mr. Dinakaran. That’s all empty talk for political misuse.” (Justice Balakrishnan did not talk to us for the story)
Then, Justice Balakrishnan chose to challenge the verdict of the High Court which had held that the office of the Chief Justice of India comes within the purview of Right to Information Act and details of judges’ assets should be revealed. He has consistently maintained judges cannot be put under public scrutiny as it would hamper their functioning and independence. It was a stand not many have taken kindly to.
Manu Verghese, a Mumbai lawyer, says the real Balakrishnan isn’t remotely controversial. Vergheseinterned as a junior clerk under him at the Supreme Court in 2005. He says his mentor was humble, approachable and “carried no airs about him at all, qualities which should stand him in [good] stead as he looks to reform India’s judicial system.”