7 New Words We Learnt This Year

The words that sprang into our lexicon this year: Some neologisms, and some old ones dusted off and made new

1 Vampire Squid
Possibly the most-quoted sentence of the year in business journalism, by Matt Taibbi of Rolling Stone: “The first thing you need to know about Goldman Sachs is that it’s everywhere. The world’s most powerful investment bank is a great vampire squid wrapped around the face of humanity, relentlessly jamming its blood funnel into anything that smells like money.”

Delicious. How many, bar the marine biologists (who must be very, very grateful), knew of this creature before that? 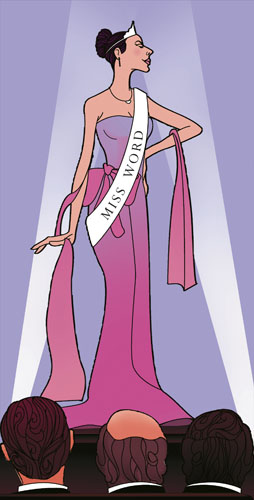 Image: Vidyanand Kamat
2 Hactivism
A portmanteau word; ‘activism’ taking digital forms, like ‘hacking’ Web sites. It is also frequently spelled ‘hacktivism’. For instance, Anonymous Iran (iran.whyweprotest.net) serves up what is practically a Hactivism 101, with loads of advice and resources. Or the army (and one uses that word advisedly) of Chinese hackers angry about the “biased” reporting on the Olympic Torch Relay messing with the CNN Web site. Or the Web site defacements by both sides involved in the Israeli invasion of Gaza.
And of course, closer to home, we have ‘patriotic’ Indians and Pakistanis, each attempting to cause embarrasment by defacing the other country’s
official sites.

3 Slacktivism
Another portmanteau word, possibly inspired by the previous one. It refers, with a sneer, to activism that doesn’t call for very much action. Not even the tech knowledge that hacking requires.
Rather than go out in marches, or trudge from door-to-door canvassing for donations or signatures, slacktivists find it much easier to sign an online petition, forward an email or light a virtual candle.
4 Sexting
Sending of sexually explicit text messages and pictures via cellphones. Some studies came out this year on the number of young (even under-age) couples engaging in sexting, and several lawsuits are still pending on sexting gone wrong. (Reminds us of the old line: If you can’t come, call.) There’s this to be said though: It’s not unprotected sex.
5 Unfriend
Following from the verbing of “friend”, thanks to the adoption of the term by social networking sites; it means to remove someone as a friend. It’s the Oxford dictionary’s word of the year. It has brought up debates on who is the self a person shows online, the danger of online relationships, and the ease with which the internet encourages deception.
6 Zombie Bank
A bank that is, by all definitions, dead, but has been kept afloat by government support. A bank with economic net worth less than zero. First Republic Bank of Texas and Citibank are well-known zombies.
7 Staycation
Taking a vacation from work, but not travelling anywhere, for economic reasons. Instead, one explores one’s hometown. Far less money and stress. Even Fodor’s now writes about good staycations.

Tweets by @forbes_india
11 Places in Which to Rejuvenate
People's Advocate