11 Most Desirable Sets of Wheels

Money no object, which are the vehicles everyone’s going to wish they owned?

1 Ferrari 458 Italia
A Ferrari, any Ferrari, is worth an arm and a leg; when it’s as gorgeous as the 458 Italia, you can throw in the other arm and leg. Not only does the Italia mark a return to form for the stylists at Pinninfarina, it is also dripping with exotic tech: Aerodynamics inspired by the Prancing Horse’s Formula 1 racing cars, a 4.5-litre V8 engine that develops a scarcely imaginable 562 horsepower at a shrieking 9000rpm, a seven-speed twin-clutch gearbox, even sharper handling, trick differentials, the works. Buy one in red with the tan Daytona leather interiors and watch your personal net worth treble.
Price: Rs. 1.2 crore

2 Lamborghini Reventon roadster
Lamborghini don’t make cars for shrinking violets but this one will be adept at making children cry and women loose bits of clothing. Named after a Mexican bull that killed a toreador in 1943, it is clothed in a carbon fibre body with styling inspired by the F22 fighter jet (designers actually spent time with a squadron based in Italy taking notes), and gets its 6.5-litre V12 engine from the LP670-SV (SV stands for Super Veloce, Italian for super fast).
Price: Rs. 7.6 crore
3 Honda VFR1200
Robert Pirsig in Zen and the Art of Motorcycle Maintenance says, “In a car you’re always in a compartment. Through that car window everything you see is just more TV.  On a bike that frame is gone. You’re in the scene, not just watching it anymore.” That’s why every petrol head’s garage has to have a motorcycle and not just any bike but a the Honda VFR1200. It’s blindingly quick with 160 horsepower but is comfortable to ride from Kashmir to Kanyakumari. And best of all the twin-clutch gearbox can also shift on its own if you want it to. An automatic gearbox on a bike – it’s no longer the stuff of science fiction.
Price: Rs. 12 lakh 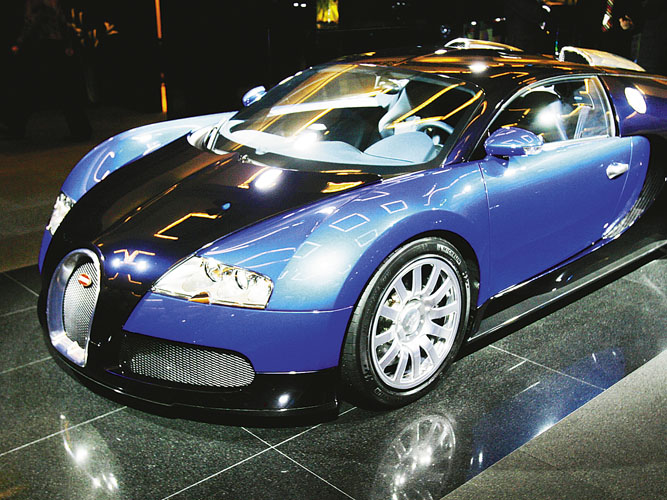 Image: reuters
4 Abarth 695 Tributo Ferrari
You can’t possibly take the Ferrari to the shops to buy milk now, can you? For that you need the Ferrari edition of the Abarth 695, available only in red with Ferrari racing stripes, bigger wheels that ape a Ferrari design and bits and bobs of expensive-looking carbon-fibre. Of course the engine is spiked so you’ll out-accelerate the paparazzi while making a lot of noise via the trick exhaust.
Price: Rs. 19 lakh
5 Bentley Mulsanne
An industry stalwart can’t be driving around everywhere. There are times when a back seat is required and backseats don’t get more opulent than in the Bentley Mulsanne. Only the finest cows have given their leather, the wood is from the finest trees, every possible accessory in the book is at hand, and everything is hand-assembled, including the monster 6.75 litre V8 engine. Best part? It looks like a million bucks.
Price: Rs. 1.6 crore
6 Ducati Desmosedici RR
The Ferrari of motorcycles, no question. The Desmosedici RR (Racing Replica) is the most exotic bike money can buy, a road-legal replica of the world championship winning Ducati MotoGP bike that Casey Stoner used to humble Valentino Rossi. It is laden with carbon-fibre bodywork, racing suspension, racing ECU, slip-on exhaust (to shatter window panes in the next city) and an engine featuring magnesium, titanium and lots of unobtanium. The price also includes enough sponsor stickers to cover the entire bike.
Price: Rs. 30 lakh
7 Mercedes-Benz GL-Class (Brabus G V12 S)
Gentlemen of the outdoors enjoy a spot of angling and wildlife spotting, but no gentleman is going to subject himself to the ardours of a forest-issue Gypsy. When the going gets rough you need a proper off-roader, an off-roader with pedigree and immense capability and for decades the Mercedes-Benz GL-Class has set the gold standard. In standard trim it’s not exactly desirable but when legendary tuning house Brabus goes to work on it, it sure does! The Brabus G V12 S gets a 6.3-litre twin-turbo V12 kicking out 700horsepower and making it one of the fastest off-roaders on the planet with a top speed of 260kmph.  Price: Rs. 68 lakh
9 Mercedes-Benz SLS AMG
Gullwing doors. As far as auto-erotica goes this should be labelled XXX, shrink-wrapped and hid in the farthest corners of the bookshelf, next to video tapes of Tiger Wood’s by-the-hour girlfriends. The gullwing doors are homage to the legendary 300SL sportscars of the 50’s but otherwise the SLS is modern and up-to-date with a growling mad V8 under the hood, luxurious interiors and impeccable quality you’d expect from Mercedes.
It also drives like, well, a Mercedes — usable, fast and comfortable. An everyday supercar? You’re staring at it!
Price: Rs. 1.13 crore
10 Lexus LF-A
Toyota jumped into Formula 1 in 2002 and threw money at the F1 project like you’d throw water at a fire. Toyota  expected to win the world championship in a couple of years and so commissioned a supercar to be unveiled at the same time to bask in the glory. Seven years later Toyota quit F1 without winning a single Grand Prix and having spent so much money on the LF-A decided to launch it in any case. The LF-A thus runs a V10 engine because six years back F1 cars raced V10s (they use V8s now). With 552 horsepower, extensive use of carbon fibre, rear-wheel-drive, wild Japanese styling, an incredible interior and no hybrid nonsense this is one of the most desirable supercars in the business. Hurry, it’s limited to just 500 units.
Price: Rs. 2.6 crore

11 Honda U3-X
Any petrol head abhors walking. We’ll hit the gym to look like a Formula 1 driver but we’ll never, ever walk and for us the U3X is a godsend. It’s no bigger than a skateboard, not much heavier and is so sophisticated a Segway looks like something from the Stone Age in comparison. Using technologies and processing power adapted from Honda’s Asimo robots, the HOT Drive system (basically the world’s first onmi-directional wheel) and electric motors keep the U3-X upright. You sit on a platform that folds out from the top, place legs on footpegs and off you go. Lean forward to move in front, leans sideways to turn and put your legs down to stop it. Simple, clever, man’s best friend.
Price: TBA

Taxes extra for all vehicles