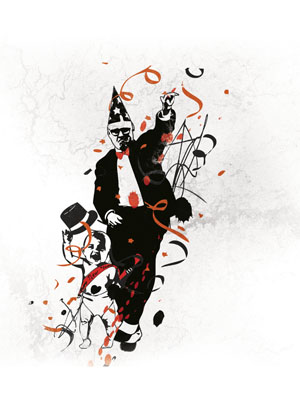 Date Line
How about some real party-hopping? Let’s say you start on a small Pacific island just this side of the International Date Line. Party through the night, shout the countdown, then get on to your seaplane and hop across into yesterday. Grab some sleep while your pilot finds another island, and, whoopee, you get to celebrate the New Year a second time. (You could, of course do the same thing between Siberia and Alaska, since they’re in eyeshot of each other, according to former governor Sarah Palin, but she might mistake your party hat for a moose and shoot you.)

Five-Star Hotels
From what the big guys are telling us, they’re not forking out vast sums of money for celebs for their New Year bashes, and instead, they’re going to — gasp — give the paying customers more value. So this might be the year to bring in the year in their snazzy environs.

Space Station
If you’re really into high living, you should take a slightly longer trip. Like to the International Space Station. It orbits the earth in 90 minutes, so you can have 16 New Year parties in just one day. A bit expensive, though; it costs anywhere between $20 million and $35 million.

Sunburn, Goa
Sunburn, a music festival in Goa, has come a long way in three years. It has earned itself a place among the top music festivals in the world. This year promises to be no different with Ferry Corsten, one of the top 10 DJs in the world, Brian Transeau (BT), ‘the Godfather of electronic music’ and a number of other DJs. The festival has seen audiences of over 5,000 people. It begins on December 27 with tickets ranging from Rs. 2,400 to Rs. 8,400 (taxes extra).

Mallya Calendar Bash
This one isn’t a year-end party, but (a), it’s about a calendar, and nothing says New Year more than a new calendar, and (b), hey, it has supermodels, and that conquers everything. We can’t give you details — folks in the business tell us nothing is finalised until two days before the event anyway — but on December 18, His Goodtimesness will launch the 2011 Kingfisher calendar at his residence, Neeladri, in Mumbai. Unconfirmed reports say either Katrina Kaif or Abhishek Bachchan will do the honours and the guest list is just around 300.