She is adding sizzle, bringing in lots of cash, carving out an anti-Trump role and seemingly confounding the Republican opposition 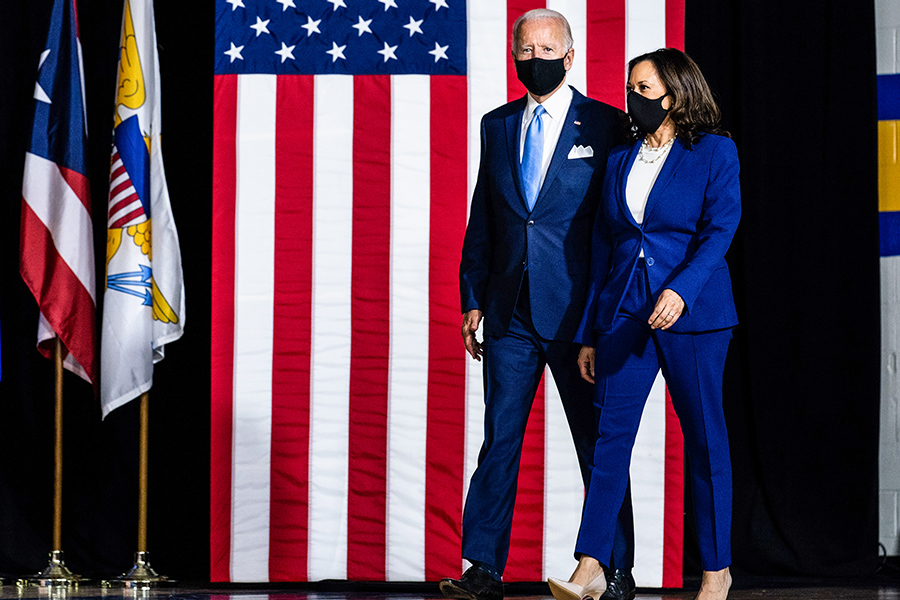 When Joe Biden dialed up Sen. Kamala Harris on a videoconference call and asked her The Question — “You ready to go to work?” he said, to which she replied, “Oh my God, I am so ready” — his choice as vice president was a well-kept secret but hardly a surprise.

Almost from the start of the 2020 campaign, the possibility of a Biden-Harris ticket had loomed large in the imagination. Voters would bring it up unprompted on the campaign trail, sometimes to the annoyance of Harris, and Democratic strategists pictured it as they dreamed up an ideal alliance to take down President Donald Trump.

Now that a Biden-Harris ticket is the Democratic reality, here are five takeaways from their first full day as a ticket after a rollout that was as smooth as it was socially distanced from spontaneity:

A wave of news coverage heralded Harris’ nomination as groundbreaking, but it could easily be lost just how rare it is that Black women are elevated to positions of political power in America. Harris is only the second Black woman ever to serve in the U.S. Senate, and the first South Asian American woman. No Black woman has ever served as the governor of a state. Before Harris, no Black woman had ever been on a major party’s presidential ticket.

And yet the choice of Harris can, at the same time, fairly be described as conventional and even the most expected pick, not just because of her ideological alignment with Biden but also because of her ability to draw support from so many corners of the Democratic coalition. During her own primary bid, that fact sometimes left her without her own base, as she oscillated between explicit appeals to the left (her pre-candidacy embrace of “Medicare for all”) and moves toward the middle (she promised a middle-class tax cut as her top priority).

But plopped into the heat of the general election, her lack of ideological definition may prove a net advantage. Her choice won plaudits from both the billionaire Michael Bloomberg and Sen. Bernie Sanders (who notably praised her on health care).

Republicans tried to foment some frustration but were left with thin gruel among prominent Democrats. The same history-making potential of Harris’ candidacy that is driving excitement may also help mute the opposition.

Rep. Ro Khanna of California, a national co-chair of the 2020 Sanders campaign, had publicly pressed for a more progressive choice but praised the power of Harris’ story as the “daughter of immigrants,” saying it “really resonated.”

She infuses the ticket with some history-making sizzle.

Stability and steadiness. Those messages have been at the core of the Biden message since the start of his campaign, and never more so than during the pandemic that has engulfed the nation in the last five months. But sizzle? That hasn’t been the Biden calling card.

Enter Harris, at 55 a comparatively youthful politician who, at her best, can be one of the Democratic Party’s most engaging speakers.

The placement of Harris, a daughter of Indian and Jamaican immigrants, on the ticket represents the recognition of the critical role that Black women play in the Democratic coalition as its most reliable voters. She offered a taste of the range of her potential political appeal in her first speech. She cut at Trump, talked up her habit of home-cooked Sunday dinners and embraced her place in history in a line of “heroic and ambitious women.”

Harris and Biden, 77, engaged, both onstage and later at an small-dollar fundraiser, in some back-and-forth banter that showed their deep familiarity. “With your permission, madam vice president,” Biden gently butted in at one point.

This is no political shotgun wedding but a yearslong relationship that dates to Harris’ days as California’s attorney general, which overlapped with the tenure of Biden’s son Beau Biden as attorney general in Delaware. Harris said Beau, who died in 2015, had been on her mind since the elder Biden asked her to join the ticket.

“I’ve been thinking, yes, about the first Biden that I really came to know, and that of course is Joe’s beloved son,” Harris said. Then she added a quick and knowing addendum. “One of his beloved sons, Beau.”

The Harris pick is spurring a wave of cash.

The choice was announced around 4:15 p.m. Tuesday. The Biden campaign promptly broke the donation-processing site ActBlue’s record for the most money ever raised in an hour. By early evening the campaign had achieved its biggest single day of grass-roots online fundraising.

On Wednesday, Harris made her debut speech to the nation as part of the ticket. It was carried live on all the cable and broadcast news networks. The Biden campaign promptly broke ActBlue’s hourly record again.

By the end of Harris’ first full day on the campaign trail, the Biden campaign war chest had swelled, according to the campaign, by well over $34 million — and that is probably just the start. One official with the campaign said it had sold $1.2 million worth of yard signs since her announcement.

What makes the Harris choice unique — and what was one of her potential appeals as a candidate herself — is the senator’s ability to lure both traditional big donors and waves of smaller supporters online.

Jon Henes, a lawyer who had served as Harris’ national finance chairman, called her “the perfect choice” for Biden and said her selection had spurred requests to assist the new ticket. “The immediate outpouring of support with people asking how they can help is so meaningful and confirms that Vice President Biden made the right choice with Kamala,” he said.

Other donors, from Silicon Valley to Wall Street, echoed the sentiment. “Everyone loves her,” said Marc Lasry, a hedge fund executive and top Democratic fundraiser.

Harris will ‘prosecute the case’ against Trump.

Playing the attack dog is fairly standard fare for vice-presidential picks, and Harris is well suited to the role. A former prosecutor, she made some of her biggest splashes in her three-plus years in the Senate grilling Trump administration appointees: Brett Kavanaugh. Jeff Sessions. William Barr.

She quickly adopted the language of a district attorney on the stump. “The case against Donald Trump and Mike Pence is open-and-shut,” she declared. “Just look where they’ve gotten us.”

Prosecutorial skills were a centerpiece of her own presidential appeal, and for Biden, having her by his side — even virtually — could free him to more forcefully make the proactive case for his own presidency, even as his advisers see the 2020 race chiefly as a referendum on Trump.

In one of several fresh lines on Wednesday, Harris said of the president, “He inherited the longest economic expansion in history and then, like everything else he inherited, he ran it into the ground.”

The Republican response was a muddle of contractions.

Harris’ selection was hardly a shock.

Yet in the hours after she became part of the Democratic ticket, the Republican efforts to define her were scattershot and discordant. The Trump campaign labeled her a “radical” and the “most liberal” senator, only to have the Republican National Committee distribute examples of why the left was opposed to her because she was not progressive enough.

Commentators on Fox News and other right-wing outlets mispronounced her name, some seemingly on purpose. “Whatever,” snapped Tucker Carlson, the Fox News host, when a guest tried to correct him. Others questioned if she could truly claim to be Black.

“There is no doubt an othering going on. It’s playing into the worst fears of Donald Trump’s base,” said Angela Rye, a Democratic strategist and former executive director of the Congressional Black Caucus. “It’s déjà vu. She’s Black. She’s not Black enough.”

In a fundraising email about Harris’ selection, Vice President Mike Pence cast the Biden-Harris ticket as a “radical duo,” and minced no words in dividing America.

“The stakes have never been higher, and we need your help to send a message that this is YOUR Country, NOT THEIRS,” he wrote.

Trump himself called Harris “nasty” or “nastier” four times in his first remarks after her selection, terms he has often deployed against women. He also posted a message on Twitter on Wednesday that declared “the ‘suburban housewife’ will be voting for me.” The tweet did not mention Harris but claimed another Democrat, Sen. Cory Booker, who is also Black, would expand low-income housing in suburbs and help it “invade their neighborhood.”

Rye sighed about the ugly messaging in the race.

Tweets by @forbes_india
New Zealand beat the virus once. Can it do it again?
VIDEO: India's highest-paid FMCG CEOs and salaries