7 Political Moves to Watch Out For

Current developments that could open up new fronts for India

1 The Taliban Terror Machine
In early December 2009, President Barack Obama’s administration finally committed 30,000 additional troops in a bid to intensify its engagement in Afghanistan. The final flourish will now happen over the next year, as the US-led NATO alliance look to close out the war in the next 18 months. Obama has made it clear that India will be a partner in the reconstruction of the war-weary nation’s democratic institutions and infrastructure. But in the past few months, the US has sought to make a distinction between the Taliban — which it considers rogue but native — and Al Qaeda, its primary enemy. This new soft strategy towards the Taliban presents a strange denouement for India. If the Taliban and its friends in Pakistan become aggressive against India, the US may not engage them as actively as it does now. So next year, India may have its hands full preparing for a scenario when the Americans leave the ’hood.

2 US-Russia and US-China Bilateral Relationship
President Barack Obama’s increased bilateral engagement with Russia and China has, in a perverse way, diminished the strategic importance that the Bush administration had attached to India as a counterbalance in the region. While Russia is India’s old friend, China is an old adversary with whom relations, though better, are not exactly rosy at the moment. 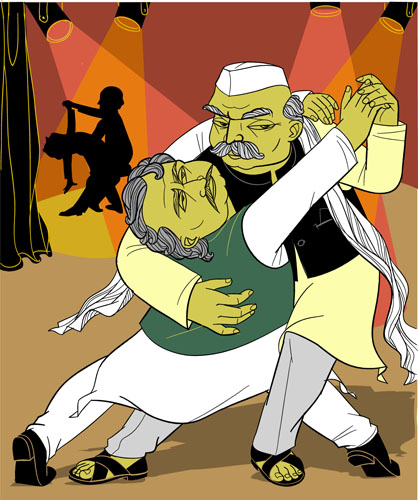 Image: Malay Karmakar
If the US manages to build enough confidence in these two the character of negotiations on international issues could change. For example, if Russia supports the US stance on the Comprehensive Test Ban Treaty, then India could come under tremendous pressure to sign it. India’s relationship with China is at a precarious point. Mistrust between the two nations is high; Chinese aspirations are huge and so are India’s. It doesn’t help that China is also close to Pakistan at a time when India is trying to get it to act on the terrorist attacks of 2008. The slugfest over Arunachal Pradesh and Tibet could possibly get ugly and hurt the world. And will the US offer to step in, just as it did when the last Chinese incursion took place in 1962? No one is sure.
3 Will Israel Launch a Pre-emptive Strike on Iran?
Last year, strategic affairs circles were abuzz with talk that Israel had come perilously close to attacking Iran. That threat isn’t likely to disappear. On the contrary, the right-wing Israel government, led by Avigdor Liberman, is said to be deeply miffed with the Obama administration’s new soft approach towards Iran.
Just a month ago, the CIA was briefed by a leading UN expert that it would take Iran at least five years to develop a nuclear bomb. So the Obama administration has now apparently decided to pursue a gentle diplomatic pressure to gradually wean away the Iranians from the nuclear option.
Obama feels that a quieter and progressive Iran is crucial to the peace and prosperity of the region. Obama said, during his visit to Beijing in November, that Iran should prove that its nuclear programme was for peaceful purposes, hinting that such an indication would help his administration react more positively to its position. The Israelis have always looked upon Iran as the only real formidable power in the region and will do anything to ensure that it doesn’t end up with its own nuclear bomb. So far, the powerful Jewish lobby has focussed on trying to torpedo any US attempt to mend fences with Iran. It seems to be winning, as the US has now threatened crippling sanctions on Iran. That could raise temperatures in the region.
4 India’s East Asian Tango
Keep your eyes peeled on India’s Look East policy next year. Prime Minister Manmohan Singh has decided that India needs to take the lead in East Asian integration. Our source in the PMO says that it is with this objective in mind that the Prime Minister has put pressure to fast-track various pending free trade agreements (FTAs).
After signing an FTA for goods with ASEAN countries, commerce ministry mandarins are furiously working to ink a services FTA with the bloc. A member of India’s negotiating team says the government has set a deadline of August 2010 to sign the services and investment agreement. The country is expected to benefit in sectors such as information technology, ITeS and insurance. India is also fast-tracking FTAs with Japan, Indonesia, New Zealand and Australia. This could give shape to a unified trade bloc stretching across East Asia to the Pacific Rim nations. It could be the precursor to a bloc similar to the European Union, albeit much larger.
6 Mamata’s Moment may be Almost Here
“When he woke up, the dinosaur was still there.” Guatemalan writer Augusto Monterroso’s enigmatic short-short story was linked to the relentless 70-year rule of the Institutional Revolutionary Party of Mexico. The situation is no different in West Bengal, where the CPI(M) will have ruled for 34 years when the state goes to polls in 2011. With the Congress Party backing her, Mamata Banerjee of the Trinamool Congress looks set to bury the CPI(M) in its own hubris. To counter the build-up, some people in the CPI(M) are advocating advancing the elections to 2010. A decision may depend on what happens in May, when 18 municipal corporations, including that of Kolkata, go to polls. This could be the mother of all polls.
7 The Sting in the Copenhagen Tail
By the time you read this, the Copenhagen climate change summit would be over. And there’s a good chance that the negotiations will spawn a set of treaties that impact almost every other country in the world. Indian negotiators fear that these treaties could get linked to issues of global trade. Prime Minister Manmohan Singh has warned that climate change has become a pretext for pursuing protectionist policies under a green label.
Much depends on the outcome of the summit. A political agreement instead of a legal treaty in Copenhagen will mean India could get enmeshed in climate change issues when it starts to conduct bilateral negotiations in areas including trade and strategic deals. Pressure to do more may also result in measures such as a carbon tax on industry. Don’t take this lightly. The establishment is already whispering about it.