Only 68 billionaires fell from the list this year, and eight of those died. That pales in comparison with the 210 newcomers to the list. Here are 10 notable drop-offs 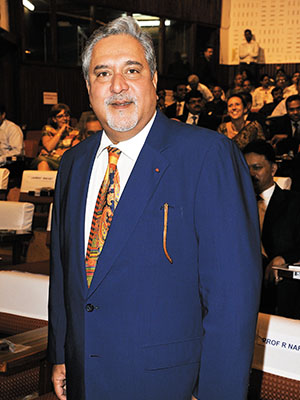 Vijay Mallya, India
Mallya’s Kingfisher Airlines is on the verge of closure. Planes grounded, salaries unpaid for months. The wife of a Kingfisher engineer committed suicide due to financial worries. Mallya is trying to sell his stake in United Spirits to Diageo to pay off Kingfisher’s debts—estimated at over $2 billion.

Alexander Lebedev, Russia
Lebedev has always clashed with his country’s power structure, and he owns the country’s leading opposition newspaper. The former National Reserve Bank in Moscow and his Crimean hotel were both searched in 2011. Lebedev now owns National Reserve Corp (NRC). In 2012, Russian authorties forced Lebedev to sell all his assets in government-majority-owned Aeroflot. He got in a laugh when he appointed his 15-month-old son to the board of Aeroflot. “The boards of state-owned companies basically have no decision-making power,” he said. “Why do they need adults?”

Mark Pincus, US
After stock in Zynga, the online-game maker Pincus founded, hit highs in April 2012 of $15 a share, everything went downhill. In March, the company bought OMGPOP, maker of Draw Something, for $200 million. Then the daily user base for the game plummeted. On May 18, came the Facebook IPO. And when Facebook floundered, Zynga followed. From March through August, the stock lost 80 percent of its value.

Aubrey McClendon, US
He is the soon-to-be-former CEO of Chesapeake Energy, America’s second-largest natural gas producer and its most active driller and fracker. Chesapeake has always aggressively employed debt leverage. In late 2011, we dubbed him ‘America’s most reckless billionaire’. He was forced to sell nearly all his Chesapeake shares in a 2008 margin call. His love of leverage has sent
him off the list.

Joaquin Guzman Loera,  Mexico
One of the world’s most wanted drug dealers and leader of the Sinaloa cartel,‘El Chapo’ is believed to be living in Mexico. He is no longer someone we are confident to call a billionaire.

John Sperling, US
Former professor founded Apollo Group, which runs for-profit schools, the biggest being University of Phoenix. Both he and his son Peter have sold most of their shares in the failing enterprise over the years, giving their fortune some protection from the company’s decline.

Thomas Straumann, Switzerland
Straumann Holdings, Straumann’s dentistry products and services company, is down 70 percent since its 2007 highs. He’s had to sell some personal assets, including his Aston Martin DB5, to make ends meet.

Dinu Patriciu, Romania
He had a liver transplant in December. His fortunes also suffered, with both his retail chains declaring bankruptcy in February. He also unloaded his media assets.