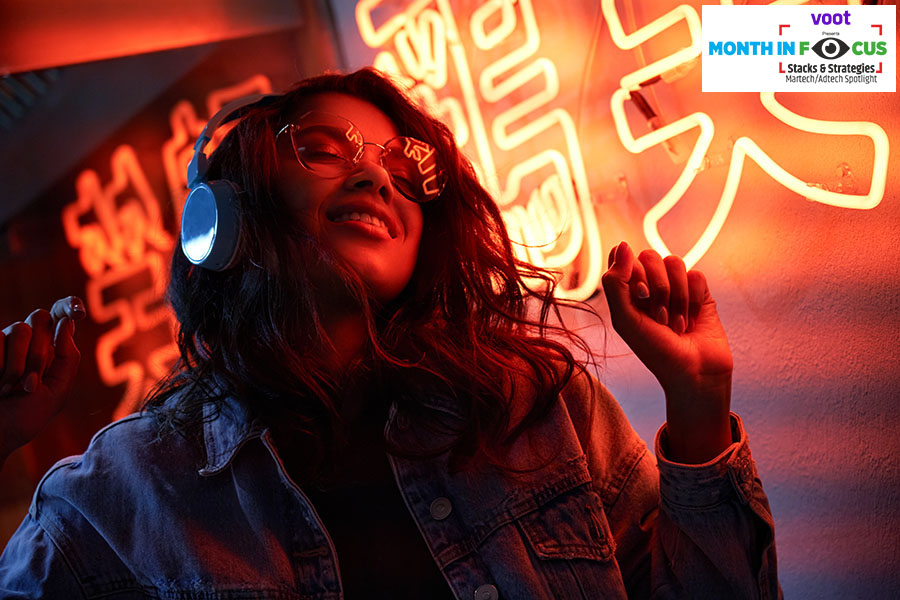 Parikshit Sharma, 19, is an avid Spotify user whose day starts and ends with listening to music, podcasts and audio streams on the platform. He is not a subscriber of their premium package. “I don’t mind the ads as long as I’m getting my daily dose of music and podcasts,” claims Sharma.

Sharma is a classic consumer case for a wide variety of brands including categories such as smartphones, confectionery, dating apps, and video streaming platforms that are tapping the Gen Z and millennial consumer base (18 to 35 years) on audio streaming platforms serving smart, customised, programmatic ads. To be sure, there’s enough data on how well programmatic advertising works on videos and display, though audio is slowly yet steadily picking pace as well.
A joint report by EY-FICCI on India’s M&E sector published in March states that the share of programmatic advertising increased from 10 percent of total digital spends in 2017 to 42 percent in 2021. The digital media segment grew 29 percent to reach Rs 303 billion in 2021 and it is expected to grow further at a CAGR of 20 percent over the next three years to touch Rs 537 billion.
“Programmatic advertising is now extending its remit to sectors such as audio OTT, DOOH, and we can expect to see several platforms come into being to serve even traditional platforms like radio and regional television in future,” the report notes.

Headroom for growth in audio ads

The usage stats clearly indicate key trends as well. The EY-FICCI report states that Indians spent 4.7 hours a day on their phones in 2021, aggregating 700 billion hours of consumption (second highest in the world). Around 197 million people streamed music online in 2021 on a monthly basis. However, India was ranked 20th in terms of consumer spend which in turn means enough headroom for advertisers and agencies to convince consumers for making purchase decisions.
Lalatendu Das, CEO, Performics India, a Publicis India-owned performance marketing agency, highlights that while reach of audio advertising has grown to a sizeable number (approximately 200 million in India), the advertising spend on audio as a channel remains muted. “Based on our experience, audio gets less than 10 percent share of advertising spend for most of our clients,” he notes.
Das shares that currently there are two kinds of advertisers that are actively leveraging programmatic audio advertising—Value seekers: CMP (cost per thousand impressions) on audio advertising remains quite attractive (40 percent to 50 percent lower than for video). Hence advertisers who have already attained good reach on traditional web and video are exploring audio as an alternate channel. The second category is when an advertiser wishes to promote a niche product and placements–newer products–especially with a short shelf-life (such as an upcoming event, sale).

Experts said that audio publishers and streaming platforms offer a variety of ad formats including display, short audio and video ads.
“Short audio ads up to 15 seconds on music streaming platforms like Gaana, Saavan, YouTube have worked for us in the past,” shares Performics India’s Das.
Swedish audio streaming platform Spotify, which entered India in February 2019, offers audio, video, display and proprietary tech which only shows ads when the user is using the screen.
“Our multi-format campaigns drive 40 percent more lift in various brand metrics as compared to just audio ads and that’s what we recommend to our advertiser partners,” says Arjun Kolady, head of sales, Spotify India.
Kolady clarifies that ads on Spotify are served to users based on their state and inputs. “…so if someone’s running using Spotify they will only be served audio ads because they are not looking at the screen. We have upwards of 90 percent of completion rates across all our formats including audio and video. From the attention point of view, audio has the highest scale and has most moments that one can reach the consumer on but the visual formats drive more action,” he adds.
Mondelez India, for instance, which has worked with Spotify, states that within the company, audio has remained an integral part of our Cadbury Dairy Milk Silk campaigns with the product having a distinctive audio asset (its ad jingle) associated with it.
“In an effort to go where our consumers are present, for this year's Valentine's Day campaign, we zeroed in on music as a genre to leverage, and in association with Spotify, we created playlists that gave couples a chance to reveal secret messages. With personalisation transitioning from good-to-have to must-have, these audio platforms with their deep tech are able to provide personalisation that is very effective,” says Anil Viswanathan, vice president – marketing, Mondelez India.

Due to the abundance of free audio options, just three million people purchased music subscriptions in 2021, producing Rs 1.6 billion in revenue. FICCI report estimates that at best, the paid subscription industry will reach 7 million paid users by 2024 at a maximum effective rate of Re 1 per day, generating Rs 2.8 billion in subscription revenue. This means that audio streaming platforms will largely be advertising driven.
“Smartphone users in India will cross 500 million shortly, and MAU (monthly active users) on some of the leading audio platforms are on the rise. However there are still challenges around tracking, effectiveness measurement and attribution when it comes to audio advertising. The space can unlock newer capabilities if the audio platform providers can innovate to solve these problems,” he concludes.
Note to readers: Storyboard18’s new Month In Focus initiative spotlights themes and topics that are pushing marketers to reshape and rethink how brands interact with today’s customers. Our theme for this month is Stacks & Strategies, a martech and adtech spotlight on how decision makers and marketers are advancing the adoption of new technologies and tech-driven strategies in the brand marketing ecosystem. From the defining trends and preparing for a cookiepocalypse to how progressive martech strategies help fast track business and brand growth. Catch this special on Storyboard18.