Spoken word: The rise of performance poetry in India

The concept of spoken word, or performance poetry, might be a Western import. But like all things foreign, it is being adopted and adapted into Indianness 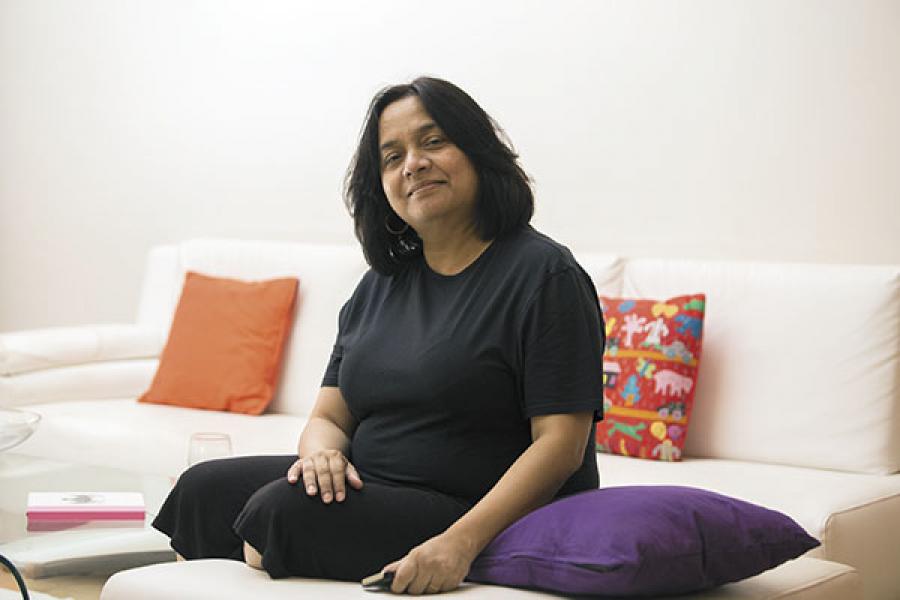 A man speaks — no, more than that. His voice rises and falls, drawing forth syllables like waves until they break against each other. His body moves fluidly along with the lingual melody that dances through the air of an electrified audience. It’s a small, bare room in which these men and women have gathered, but the space seems to expand as the art breathes through it. “Spoken word is poetry that is written to be performed, written for the purpose of being performed,” says Shantanu Anand, founder of Airplane Poetry Movement , a Bengaluru organisation that strives to spread the knowledge and practice of spoken word in India.

Increased access to internet and TV as well as spoken word poets visiting from abroad have played a significant role in popularising this emerging art form in the country. Whether it’s from watching Button Poetry videos on YouTube on loop or witnessing Sarah Kay and Phil Kaye perform at Mumbai’s blueFrog in 2013—and despite the confusion that surrounds its definition—urban poetry enthusiasts in India are warming to this largely Western import. And then bending it to their own senses and sensibilities.

In India, with its rich and varied tradition of poetry, the concept of performance poetry is not novel.  “Performance poetry is a new name given to an old tradition,” says Hemant Divate, internationally acclaimed poet, editor and publisher. For hundreds of years, passionate poets and their audiences have gathered at royal courts and village fairs, at mushairas and kavi sammelans, to take part in a tradition that can be both profound and entertaining. And while performance has remained an important element of the rendition of traditional poetry, so have adherence to metre, rhyme, form and character. 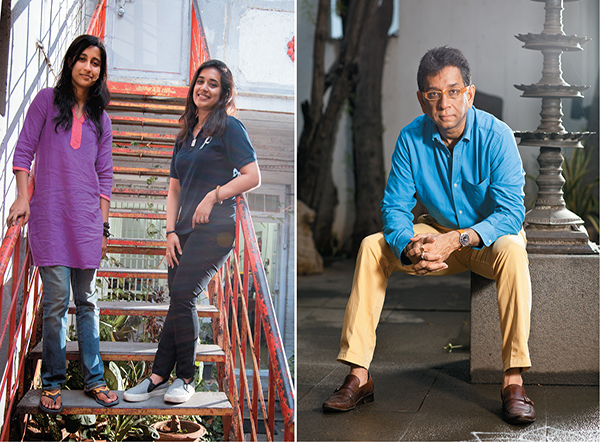 With no need for training or experience, no requisite structure, and no conventional subject, spoken word has become more accessible to those who might otherwise feel intimidated or uninterested. However, its free form has also given rise to heated debates surrounding the true definition of spoken word, if there is one at all.

Many performing groups combine theatrics, music or song with poetry. Organised events might range from performances by multilingual rap crews to theatre companies executing carefully choreographed shows, giving the audience a variety of ways to understand this trend.

For 25-year-old Ramneek Singh, poet and curator, it’s about placing the poetry and content first, before music or theatre. “MTV is all about music, rappers dancing and trashing other rappers. Or saying how cool I am. That’s not spoken word. I don’t associate with that whole form because I have a motive,” he says. 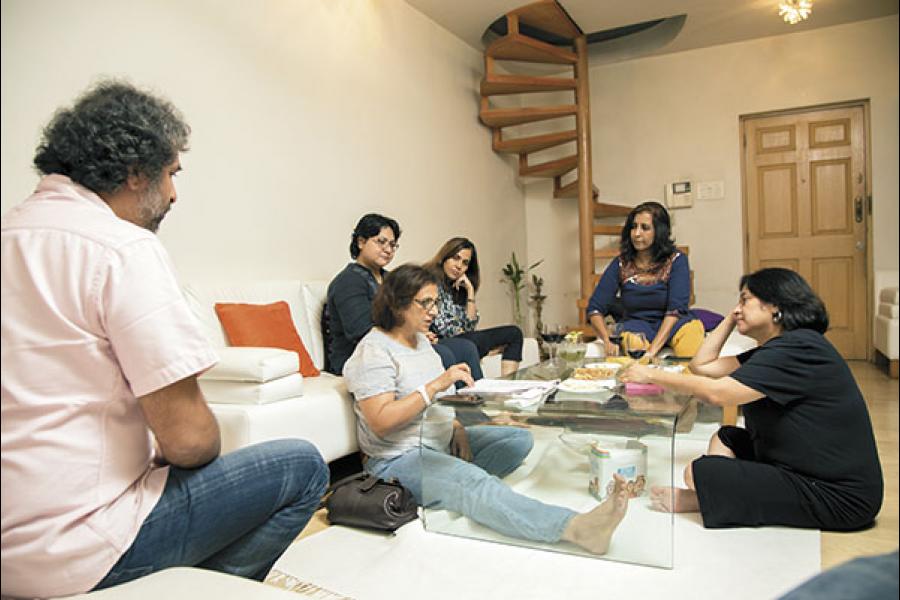 Image: Joshua Navalkar
An informal meeting of the members of Caferati

Siddharth Warrier, a resident doctor at KEM Hospital in Mumbai, says venturing into this free-verse format is a new experience for him. Warrier, who grew up writing poetry that conformed to traditional metre and rhyme schemes, says, “It’s raw. You don’t need to work on it too much. If you try and write a sonnet about your emotions, you’ll spend so much time trying to structure it and lose the emotion. In spoken word, the very things you feel are spoken word.”

But this freedom does not come without cost. The accessibility and accepting nature of this half-old half-new form has led to suspicions about its validity and future. According to Manisha Lakhe, co-founder of Caferati, a writer’s forum in Mumbai, performers pander too often to an audience that rewards bad writing and fails to provide constructive criticism. “It’s the word, the lyrical quality of how you weave those words together. We don’t have that. Young people who are here are very happy to hear this person who looks so gorgeous on stage who didn’t get a date. They are just identifying with the event. They’re not listening to the words.”

It is both a blessing and a curse, according to Anand. “They don’t work hard enough at the craft of writing. Because at the end of the day, it’s poetry. A lot of people choose to be entertaining rather than saying something they truly believe. Or something that matters.”

Spoken word, however, is not an exclusive group for elite, English-literate speakers. Although largely popularised as a Western, English-language import, it has galvanised many practitioners to return to, explore, and preserve poetry in regional languages.

Singh, who grew up in Jammu and Kashmir, speaks fluent English but insists on performing in Hindustani. His ability to create compelling imagery and convey emotion to his audience will always lie with his mother tongue. “Someone who lives in my village, he doesn’t know English. And if I go and use these words, ‘conflict’ and ‘oppression’, he won’t know them,” he says.

For others, it’s not so much about performing in that language as listening and learning from others who do. Manasi Nene, founder of Pune Poetry Slam , describes the discovery of spoken word as a wake-up call to explore her country’s history of performance poetry. “The more a community started forming around me of poets who were into Urdu and Marathi poetry, I started learning about my roots,” she says.

Ranvir Shah, founder of the Prakriti Foundation in Chennai, sees spoken word as a way to break both language and class barriers. “It’s a collapsing of the English language of the middle-upper class world of India, where the rest of India still uses vernacular languages, not just in rural India, but even large patches of urban India depending on the state they’re in,” says Shah. “These two worlds and their two boundaries are becoming permeable. They’re connecting, the worlds are collapsing.”

However, with hundreds of dialects in India, choosing which language to perform in can be complex. What matters more: The poet’s own mastery of the language or the audience’s sensibilities? Loyalty to the mother tongue or commitment to making a high-profile impact with English?

“My command over English is much better as compared to Hindi. In Hindi, I always feel like I am being fake. That’s the problem of this whole generation. Why do I find it easier to understand emotions in Hindi but I can’t express the same?” asks Trupthi Shetty of the Poetry Club of Mumbai . Through spoken word, she has heard and connected with Hindi poems that she otherwise would never have read.

Notwithstanding the need among some to express themselves in their mother tongues, English narratives have their staunch followers. “Just because we write in English, doesn’t mean it’s not Indian,” says Anand, who is spearheading an ethnic poetry movement with two goals: To reach poets in different vernacular languages and to translate their works. 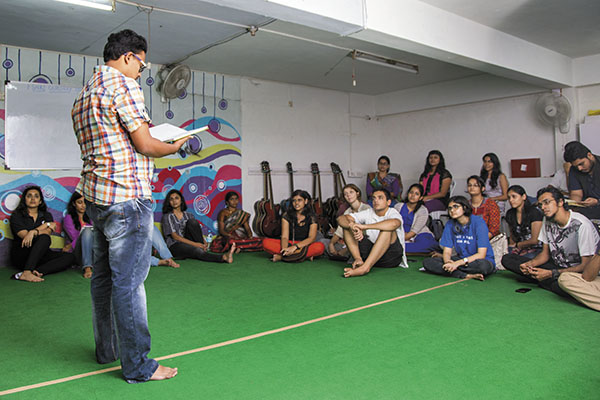 Image: Joshua Navalkar
Members of the Pune Poetry Slam gather for a session

Although the art of spoken word continues to manifest itself through diverse mediums and forms, no one seems too worried about the future.

Even critics like Lakhe, who has voiced frustrations with what she deems uncouth performances, remains optimistic.

“We need another five years. The content and quality are not yet fantastic. But then you know you have to take this with a pinch of salt, we are all new to the spoken word,” says Lakhe. “Right now, spoken word and performance poetry are like Hallmark cards. But one day, they’ll be beautiful. I know so.”