After Mamata Banerjee pulled the rug from under the UPA government last September, Prime Minister Manmohan Singh had addressed the nation. Midway through his litany of woes, Singh, like many middle class fathers tell their whiny kids, had said: "Money does not grow on trees."

Railway minister Pawan Kumar Bansal knows it only too well. He  presented today the Indian Railways (IR) budget for 2013-14, an uninspiring financial plan that wonders where the cash needed to modernise the world's second largest railway system under a single management will come from. IR plans to spend Rs 5.19 lakh crore in the next five years, with Rs 1.94 lakh crore coming from the Union Budget, Rs 1.05 lakh crore from internal accruals, market borrowing of Rs 1.2 lakh crore and Rs 1 lakh crore from private investors through partnerships. 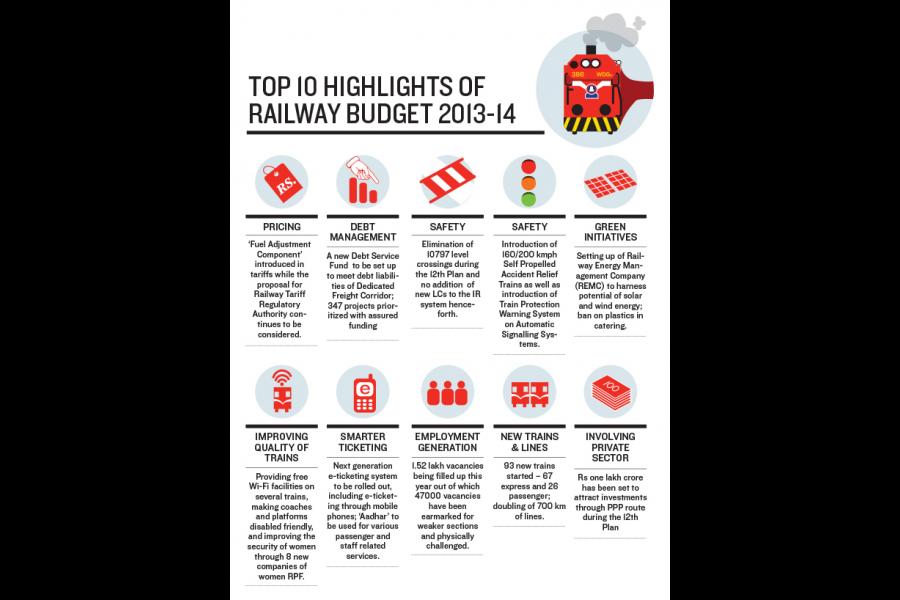 "The internal resource target, which is 1.6 times that of the 11th Plan, also appears a tall order as we could allocate only Rs 10,000 crore in the first year of the 12th Plan,'' Bansal said. "The onerous task of raising the balance amount of Rs 95,000 crore in the next four years calls for a paradigm shift in our approach to tariff and non-tariff segments of earnings." Yet Bansal did not touch passenger tariffs and did not present ideas on improving non-tariff segments of earnings such as exploiting IR's land bank. Bansal later called the budget 'realistic'.

"My main problem with the budget is that it does not tell me how things will be done, how targets will be achieved. Railways require Rs 1 lakh crore from PPP but there is no magic wand that you have which will give you this amount in the next three years of the Plan period,'' says Akhileshwar Sahay, strategic advisor, Delhi Metro Rail Corporation.

The skepticism stems from past experience. For instance, IR had planned a locomotives factory at Madhepura in Bihar several years ago. Most international locomotive makers such as GE, Siemens and Alstom have been waiting for IR to float a tender for it. So far nothing has moved.

"The two committees headed by [Sam] Pitroda and [Anil] Kakodkar had recommended some far reaching reforms. But I do not see any pathway for those reforms in this budget. I do not see how DFC (dedicated freight corridor) would be completed by 2016-17,'' says Sahay.

When he raised passenger fares on January 21, Bansal had said that internal resource generation had been seriously impacted resulting in scaling down of IR's annual plan size. Fund balances turned negative in 2011-12, adversely affecting essential replacement and renewal of assets, operation and maintenance activities and critical safety and passenger amenity works, he had said.

The passenger fare hike in January was practically annulled by the subsequent rise in diesel prices. The minister has proposed a sort of fuel surcharge on freight from April 1 onwards, which will be an adjustment against fuel price fluctuations. The proposal, originally mooted in last year's budget, was partly responsible for the then railways minister Dinesh Trivedi losing his job. Airlines bill passengers for a similar adjustment to protect themselves against fuel price rises.

The minister also raised fees charged for some services such as reservation and cancellation and Tatkal bookings. He has promised to improve passenger amenities at several railway stations and make the online reservation system faster.

It is clear that the 2014 elections is playing on the government's mind and it is also worried about its finances. Opinion is divided on whether the budget was good or bad.

Rajaji Meshram, senior manager (infrastructure) at PwC, says the story is consistent. "I do not think you can say that this budget is any less reformist than the last one because actually the fares were raised in January 2013.'' Meshram says Bansal pointing out that an annual increase of 5% to 6% in fares over 10 years can provide about Rs 1 lakh crore could mean that a few months down the line tariffs could be raised again.

The question is whether the government will have the gumption to raise tariffs as elections close in.

Meshram says new freight trains will improve the topline. "What he has stuck to is the doubling target, ie, an additional line on routes where you are sure of traffic. So doubling is a smart thing to do. And you have to prioritise.'' Yet, the IR plans to set up six more water bottling plants. Surely, it is easier to source water from private suppliers than spending money on own plants.

"Why is there no long term plan to hive off the non-core activities of the railways? Why should railways continue in the business of hospitals, manufacturing , education etc?'' asks Sahay.

Some of the minister's moves seem clever. For instance, he says 40% of consequential accidents and 60% of fatalities occur at railway level crossings. It would cost Rs 37000 crore to remove the nearly 32000 level crossings in the country. He says that a lot of that money can come only from the Central Road Fund.

DMRC's Sahay says there are many things that can improve IR which do not require money. For instance, setting up of an independent safety authority which was committed has not been done. "Even after announcement, the independent tariff authority is still no where on the horizon,'' he points out.

While in ordinary circumstances, the railway budget may have been described as good, the track record and financial difficulties of the current government does not inspire confidence, especially since it does not offer a clear, viable financial plan. Since the prime minister's September speech, the government has announced several reforms but most of them remain on paper or are half done. Bansal's budget also may end up like them. As Sahay says, the "how" is missing.

5,035
Thank you for your comment, we value your opinion and the time you took to write to us!

Tweets by @forbesindia
Prev
Demographic Dividend or Burden?
Next
My Tryst with Africa