With its 1/ 1.31-inch sensor size, the GN1 offers dual pixel autofocus to ensure you can take high quality pictures in any environment. 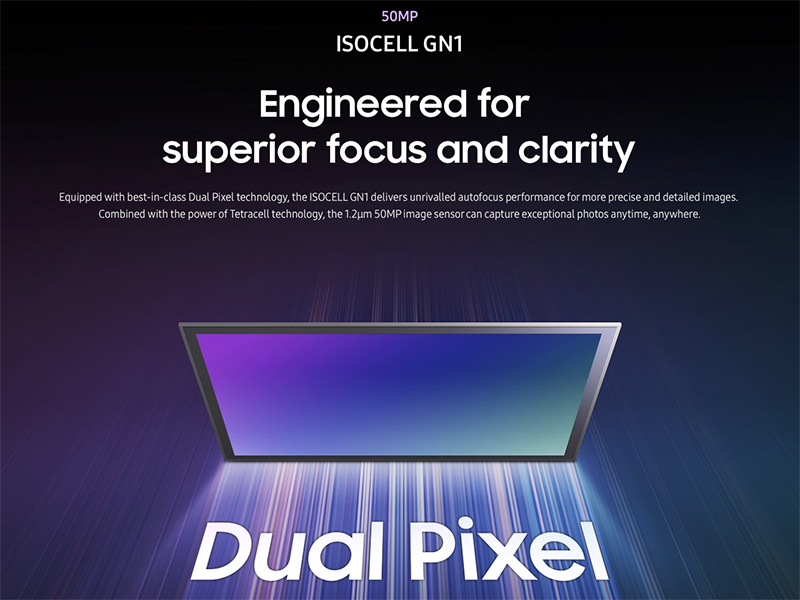 Image: Samsung
Samsung has been working towards introducing high megapixel sensors in smartphone cameras for the last few years. After launching the 48 MP IMX586 Quad Bayer sensor in 2018 and the 64 MP ISOCELL GW1, the South Korean tech giant has now introduced a 50 MP powerful sensor with 1.2-micron pixels.

The brand new camera sensor compromises resolution for bigger pixels. With its 1/ 1.31-inch sensor size, the GN1 offers dual pixel autofocus to ensure you can take high-quality pictures in any environment.

The 1.2-micron pixel in comparison to the 0.8-micron pixels will make sure that you get a far better low light performance. According to Samsung, the GN1 will come with Smart ISO tech, gyro-based image stabilization, real-time HDR, 400fps video at 1080p without autofocus, and 240fps with autofocus, and 8K/30fps recording.

According to Android Authority, the sensors might reach major phone releases by the second half of this year. And the GN 1 will be touted as the Samsung's representative in the big pixel race of Sony's IXM689, which has been already seen in some models of OnePlus and Oppo.

Another important aspect of GN 1 is that it is the company's first image sensor that offers both Dual Pixel and Tetracell technologies. The Dual Pixel feature can create 100 million phase detecting photodiodes for quick autofocus and gathering light information. It places two photodiodes side by side within a single pixel to receive light from different angles for phase detection. Thus, the new GN1 will be able to focus on an object from every corner within seconds, even in low light.

On the other hand, the Tetracell tech means that the sensor will have a 4 in 1 pixel binning.