Adiga's: Success on a plate 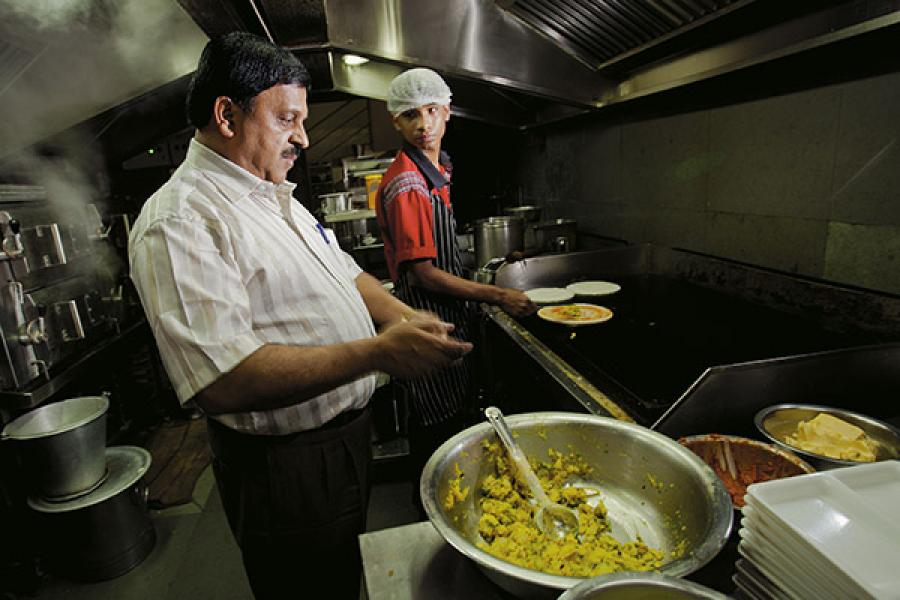 On a recent Monday afternoon, a Vasudev Adiga’s restaurant in a leafy Bangalore neighbourhood represented the energy of a metropolis. Customers parked their two-wheelers, rushed into the restaurant, paid for their order, jumped to another counter to collect it, and ran to find a place at the crowded high tables. They hurried through their lunch and rushed out as quickly as they had gone in. A floor above, the same Adiga’s could have been a different country. The pace was relaxed, half the tables were empty, customers were sitting in groups, and taking suggestions from the waiters. On the surface, it looks like a clear case of customer distinction: One floor for the high-footfall, small-ticket quick-service diners, and another for big-ticket clientele. But KN Vasudeva Adiga knows something more about these two sets of customers: They are the same. The same people who rush in and rush out of the ground floor come back with their family or friends to the first floor for the quality of the fare. His vision is simple: Offer the same quality and consistency across a hundred outlets.

The Man behind it
Adiga’s worry is getting that piece of business right. Every day, he travels 300 km within Bangalore to visit his outlets, stepping into kitchens, sampling food, and sending a message that ‘the boss’ cares about the quality of food more than anything else. He learned the basics of cooking and the importance of maintaining quality from his mother, who runs Brahmin’s Coffee Bar, a small outlet with a reputation that equals Mavalli Tiffin Rooms (MTR).

His mother could ensure consistency and quality from home, but he needs to crisscross the city to maintain the standards across 12 outlets. An engineer who, as a student, wanted to build a manufacturing plant, Adiga knew consistency can be maintained only if personal supervision is substituted with quality processes. That was curcial if he wanted to expand. That’s when he met senior partners from private equity firm New Silk Route (NSR).

Why It is a Gem
In India, cuisine is regional. What’s lip-smacking in one region may be rejected in another. NSR found that there were three exceptions: ‘Indian Chinese’, tandoori, and Udupi food. But Udupi restaurants never scaled up. “Some businesses are set up with an intention of growing big. But owners of small restaurants don’t start with scale in mind. They don’t grow beyond what the family members can manage because they don’t set up processes,” says Jacob Kurien, partner at NSR and a board member at Adigas.
That’s what Adiga’s has been working on in the last six months. It is standardising the recipes, restaurant formats, kitchen workflows. It has a professional CEO and COO. The idea is to build on the franchise that Adiga has built, establish processes that can be used across outlets, and ride on the demand for Udupi food. NSR knows a thing or two about scaling up restaurant businesses. Founder and partner Parag Saxena was an early investor in Starbucks. NSR is also an investor in Cafe Coffee Day, which has over 1,300 outlets in India.

Why It was hidden
So far, Adiga’s has been a Bangalore phenomenon. It also seemed as if it won’t grow beyond a dozen outlets. It made some news after the NSR investment, and then went quiet again. But a lot of work has been taking place in the background. By March 2013, it plans to add eight new restaurants, and once there is stability in processes, 15 to 25 a year. It also wants to double its catering business (it has a good reputation—Adiga’s was caterer at the wedding of Narayana Murthy’s daughter—and contributed a fourth of its business without a sales team. Now a team is in place).

Risks and challenges
There are no precedents of an Udupi restaurant scaling up—there’s none with more than 50 outlets. Adiga’s is yet to be tested outside Karnataka. While Chennai-based Saravana Bhavan has fared well in other cities and even abroad, Adiga’s is looking at an even bigger scale. Finally, the dynamics between the promoter (who built a business mostly on intuition) and the private equity player (who believes in processes) will be crucial.