At 19, Deepika Kumari is a name to reckon with in world archery. The only thing that eludes her is an Olympic medal, and, with it, sporting history 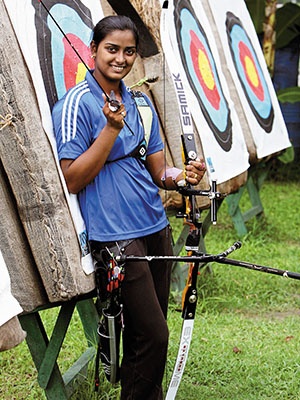 Image: Getty Images
In 2014, Deepika Kumari will take on the South Koreans at the Asian Games, and defend her Commonwealth gold

At the 2012 London Olympics, when Deepika Kumari stepped up to the line to shoot her first arrow against Great Britain’s Amy Oliver in the individual competition, all of India was watching. The venue was the Lord’s cricket ground—a place many Indians
know well.

Deepika was then the world number 1 in the recurve category—and as far as India went, one of its few genuine medal hopes. But, on that day, only grim heartbreak awaited her, and the nation. In windy conditions, she failed to hit a single bullseye and went down 2-6 in the first round.

Back in India, the reactions were predictable: She just doesn’t have it. We all forgot that Deepika was just an 18-year-old competing in her first Olympics.

Most Indians tend to think of archery as a rudimentary sport. Find a bow, pick up an arrow and shoot. Why, it was that easy in the Ramayana and the Mahabharata.

Virtually every child in India knows of Arjuna’s skill, of Ekalavya’s sacrifice, of Ram’s preferred weapon. And if normal methods didn’t work, they could just conjure up the Brahmastra—the mythological version of the guided missile. In a way, India’s connect with archery goes back a long way.

Closer to the 19th century, guns started to make an appearance on the battlefield and archers often became sitting ducks. In India, the practice survived thanks only to the tribals, who still use it to hunt, and, more recently, Limba Ram.

In 1992, Ram equalled a world record feat at the Asian Championships in Beijing. And for a while, there was a renaissance in the sport—it was covered in the media and that meant more talented individuals took it up.

But an injury saw Ram fade from public memory. The sport of archery did the same. Until Dola Banerjee bagged a World Cup gold in 2007. India took notice, but her form didn’t hold.

Deepika, the daughter of an autorickshaw driver from Jharkhand, however, was there to pick up the mantle. She became the first archer in the country to capture the sub-junior, junior and senior national titles in the same year. She went to Ogden (Utah) in the US and became India’s first archery world champion in the cadet section (under-16) in 2009.

She went on a remarkable run in 2010—where she did not finish outside the top 10 in seven successive tournaments. She also earned her first senior international crown by winning the Commonwealth gold, defeating five-time Olympian Alison Williamson of Great Britain.

More success followed in 2011—she finished second in the World Cup final and clinched the gold at the World Archery Youth Championships again.

That set her up for the Olympics in 2012. Perhaps the failure hit her harder than she imagined, shaking a confidence that she had taken years to build.

She later said: “It was disappointing. Catching a fever just a few days before the Olympics left me weak and I could not practice for several days. The swirling wind and the constantly changing weather also did not help matters.”

Former India hockey skipper Viren Rasquinha, who heads Olympic Gold Quest (OGQ)—an initiative that looks to assist India’s medal hopefuls—feels that all that has changed now. “She realised that she needs to prepare better. You just can’t turn up and win. You need to go there early, your equipment needs to be perfect,” says Rasquinha. Deepika is now a part of the OGQ.

Most people don’t realise how technical a sport archery is. The arrow is made up of three parts, the bow of 33; the poundage—like the tension in the tension rackets—has to be perfect too. And then there is the wind: It’s almost never steady. The toughest bit is the constant adjustment—no two shots are the same. Inches can be the difference between a gold and a place in the rafters.

In 2013, Deepika started to find her form once again—a silver in the World Cup final in Paris in September showed she was back on track. She is also trying to make changes that will allow her more control in windy conditions.

The youngster, who will turn 20 in June, is trying to go for a higher poundage and that means she needs to get much stronger.

“Few people realise how much strength it takes to shoot 300 arrows in a day. Fewer still realise how difficult it is to do that with any consistency. Your back muscles, your arms, your shoulders have to been very strong,” says Rasquinha.

Dola Banerjee, Deepika’s senior and a bronze medallist at the last Commonwealth Games, says the one thing that can instantly make a difference is a sports psychologist. “We have 20 seconds between each shot. In that time, we need to hit the target and make it count. We need to forget about the distractions, the opponent and focus only on the method,” says Banerjee. “That is why mental toughness is key. Right now, we do our own things but there is no one to show us the way. There should be a sports psychologist. For Deepika and for India.” 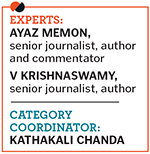 This is a big year for Deepika—the Asian Games will bring the challenge of the mighty South Koreans and there is a Commonwealth gold to defend too. Once she gets these out of the way, the focus can turn towards the 2016 Rio Olympics and a place in history.

Then, perhaps, only then will India make its peace with archery.