At 29, Pallav Nadhani has more than $5 million in his bank account, owns a Rs 47-crore business with offices in Bangalore and Kolkata, is married and drives a BMW. He isn't done yet 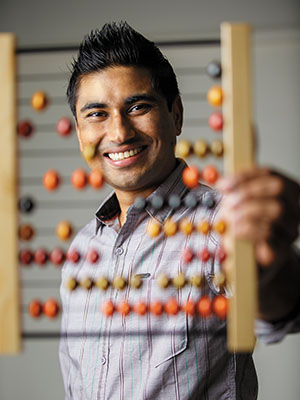 Image: Mallikarjun Katakol for Forbes India
“I don’t let this go to my head. If I was in Silicon Valley, people would not even look at me,” says Nadhani of his achievements

Pallav Nadhani, co-founder and CEO of FusionCharts, a company he started in 2001 at the age of 16 from his bedroom in Kolkata, has a question for me: “What is this list about?”

Me: This list is about people under 30 who have been high achievers and disruptors in their respective fields of work.
Nadhani: Okay.
Me: Do you think your idea of creating beautiful charts is disruptive?

Few people would let go of an opportunity to laud themselves; tell the world how great they are. But Nadhani is not one of them. It is not that he is trying to be modest either. It’s just that his attitude to success is simple, similar to the idea behind FusionCharts: To show complex data creatively, in a way that a layman can make sense of it.

In its 11-year run, FusionCharts has grown from one kid in Kolkata to a Rs 47-crore company that employs about 80 people, has more than 21,000 customers which includes companies like LinkedIn, Google, Facebook, Ford and even Barack Obama, president of the United States. That’s not all. The company has never raised money; it has been profitable from day one and is funded entirely by Nadhani.

Now, for a 29-year-old in India, that’s a fair bit of achievement.

“I don’t let this go to my head. If I was in Silicon Valley, people would not even look at me,” he says. Oh, they would. That is till they hear the word “Bihar”.

Nadhani was born in Bhagalpur, in a Marwari family, and the only luxury in the house was a computer. A student of Mount Carmel School, he says the computer gave him a “cool” status because his friends would often come over to play games. The computer, though, belonged to his father, Kisor Nadhani, who was using it to maintain accounts for a sewage water treatment project he was involved with.

Almost every other night, however, Pallav would spend countless hours on the PC. “A bunch of cousins had come to learn computers; this was in 1997, when my dad started a computer training centre. So, they had books,” he says. “In the night after they went to sleep, I would read those books. I was hugely interested in it [computers] and started learning on my own.”

His father’s training centre didn’t find many takers though, and by 1999, the senior Nadhani had moved to Kolkata in search of better prospects. It is here that he started his web design venture.

Kolkata, though, was a new world for the young Nadhani. He enrolled in La Martiniere for Boys School, where the creme de la crème of the city went to study. “Here I got the aspiration that I want to be like them. And for me to be like them, I really need to work hard. I need to be on top of the game in whatever I am working on,” he says.

There was a problem though. One couldn’t be like “them” with a measly pocket money of Rs 1,000 a month. Not when you are addicted to coffee and bowling. “I had to figure out creative ways to get more pocket money,” says Nadhani. “That’s when I came across a site where if you wrote an innovative article they would pay $600 to $1,500 for the piece. That is a lot of money for a class XI guy.” He was soon making serious money. In the two articles he wrote, he made about $2,000.

Life changed when he wrote his third piece—on how to make better charts on the web. That is how the idea of FusionCharts was born to the 16-year-old. It was serendipity.

While people liked the idea, the initial days were tough for Nadhani. Most of FusionCharts’s customers were not from India. Selling to them wasn’t easy. And he was doing everything, from designing to making and taking calls.

As business picked up, in 2005, he asked his father to join him. “I wasn’t able to handle it all. I didn’t know much about government regulations, banking, finance and all that. Also, all my payments were coming from outside so I asked my dad to step out from his business into mine,” says Nadhani. Did senior Nadhani have a problem shutting down his own web venture? “No,” says the son. “He is a sucker for growth and adventure as well.”

As FusionCharts grew, so did Nadhani’s ambitions. In 2010, he moved to Bangalore in search of growth. He’s spent the last three years building a company where there are processes, responsibilities, accountability and a system where employees can get their salaries without him having to worry. For instance, there is a meeting every Monday to generate and discuss new product ideas. There’s a review meeting every Wednesday. All employees have to respect time. If something’s got to be discussed, the person is expected to check Nadhani’s calendar and send an email with the three things that need discussion  and why. He says this is important to build accountability and focus. 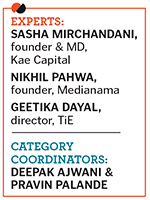 Yes. Focus. Nadhani is a stickler for focus. Strangely this is quite a contrast to his father: Because in more ways than one, he looks up to him for inspiration. In his 30-year career, his father (who is the CFO of FusionCharts) has dabbled in businesses ranging from selling bicycle parts to trading in construction material to writing a book on accounting software to running a computer training centre. So, it is fair to say that he is a multi-faceted person. “I wish I could be like him. Being multi-faceted helps you have a very nice perspective of life. But if you have to really excel at something, you need focus,” says Nadhani. “As Gladwell says, spend 10,000 hours in one thing and only then you become an expert in it. For me that’s very important. I know that for the next 10 years, I want to do just one thing. Build software products and build the software product industry in India,” he adds.

Tweets by @forbesindia
Cheteshwar Pujara: Dravid 2.0?
The Just 30 Club: Those Who Missed Out