She could have been a corporate honcho or a computer engineer. Instead, Prerna Sharma, 29, immersed herself in pure science-the study of soft condensed matter physics-and has already earned the respect of her fraternity 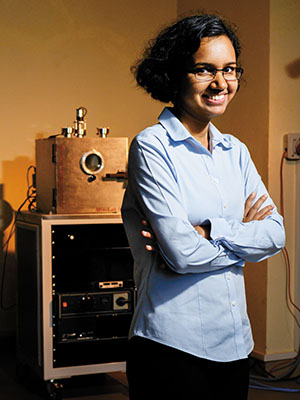 Nearly all Indian school children are asked at least once if they want to become doctors or engineers when they grow up. Prerna Sharma’s father asked her that question when she was in the 12th grade at Rukmini Devi Public School in Delhi. She chose to be neither. She almost joined corporate India, but was put off by the Common Admission Test’s (a requisite for business schools) need to gauge only speed and accuracy. She could also have had a successful career in computer engineering. Instead, in a move that her seniors and academic advisors say is fortuitous for the Indian community of physicists, Sharma opted for a career in pure science, more specifically the study of soft condensed matter physics—material such as creams, gels, shampoos and even cell membranes that may resemble but are not really simple fluids.

The 29-year-old assistant professor at the Indian Institute of Science (IISc), Bangalore, was part of an Indian research team that published a paper in the prestigious science journal Nature Physics in 2008. At the time, she was a PhD student at the Tata Institute of Fundamental Research (TIFR), Mumbai. Last year, her more recent research, conducted when she was a post-doctoral associate at Brandeis University in the US, was published in another international peer-reviewed journal, Nature. “I was interested in knowing how fluids interacted with each other in the two-dimensional world,” says Sharma. In the 3-D world, oil and water do not mix; oil droplets merge into a single layer that remains separate from water. But in 2-D, the rules are different, and this intrigued the scientist in her.

By specialising in soft matter, Sharma indulges her more-than-passing interest in chemistry and biology. “Lipids that form cell membranes, for instance, have a watery head and an oily tail,” she says. Certain kinds of lipids along with proteins form clusters called lipid rafts within the membranes, which act as gatekeepers that monitor the entry and exit of material in and out of a cell. If the rules of the 3-D world were applicable here, the lipid rafts would simply merge into a continuous layer the way oil does in water. “Our experiments [in 2-D] have shown otherwise. They shed light on the mechanism of stability of lipid rafts by relating it to the corkscrew-like (chiral) structure of constituent molecules,” says Sharma.

Her area of specialisation is alien to most people familiar only with popular science such as the Big Bang or the Higgs Boson (the God) particle. Sharma is intrigued by the “little things” which may not hold answers to big questions like the birth of the universe, but are no less majestic in the way they operate.

“It is nice work, and it is definitely non-intuitive,” says professor Shankar Ghosh, her former thesis advisor at TIFR, referring to her research at Brandeis. “When Prerna came to us after completing her BSc, she was a rookie. But she is hardworking, has had great international exposure and, today, her research gets published in top science journals.”

It was while working with Ghosh, and assisting him in setting up an experimental laboratory, that Sharma found her groove. Everything clicked, and it reflected in her grades. “I was his first student. I was happy in the lab where we were experimenting and researching on how surfaces of colloidal particles (micron-sized solid particles) in a liquid stuck to another surface such as glass,” she says. “We found that their adhesion was slow and much more complex than we had thought. It was fascinating to see it unfold particle by particle.” (This study is relevant to understanding how, for instance, blood cells adhere to veins and ventricles.)

Sharma, who is often mistaken for a student at IISc, becomes animated when she talks about her entry into this world of tiny sub-atomic particles. But for all the accolades she has garnered, Sharma was not born with an innate affinity for the subject, and struggled with it as a student at St Stephen’s College, Delhi. “From high school physics, I was thrown into this world of differential equations and other complex subjects, and it was difficult.” It was only after a year’s effort that Sharma began bonding with physics. There was a similar adjustment period when she entered TIFR. 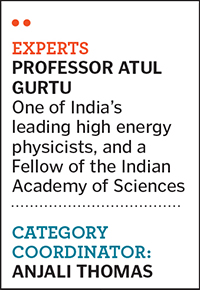 Although she adapted to this environment and later embraced a challenging post-doctorate in the US, she noticed that, over the years, many fellow women scientists “fell out of the pipeline” because of marriage. “There’s a social bias; women make the most compromises. It’s common for a wife to accompany her husband abroad while he does his research. But how many men will pause their careers to play second-fiddle to their wives?” Gender, she argues, should not be a factor when it comes to producing brilliant research.

These days, Sharma is fascinated by questions in membrane biophysics. It’s the little things that keep her hooked.
Here is the full list of 30 Under 30 for 2015 and its methodology