Any foreign investor entering the Indian civil aviation market will know the unwritten rule before making any public announcement of his intent: Always seek the blessings of the ministry beforehand. Jet Airways chairman Naresh Goyal and Etihad CEO James Hogan, both well-versed in the workings of the Indian system, did just that before their planned equity link-up. In late January, they did the rounds of the corridors of power—meeting not only the civil aviation minister Ajit Singh, but also the finance minister and the minister for trade and commerce for good measure.

On the other hand, Tony Fernandes, the feisty owner of AirAsia, has never believed in sticking to established rules. His stated philosophy has been about ‘controlled anarchy’—or unleashing the full creative energies of all his employees. That’s been at the core of his hugely successful strategy to disrupt the aviation market in Asia and helped him emerge as the largest low-cost player in this part of the world in less than a decade.

So it should have surprised no one when Fernandes suddenly announced his plan to launch a domestic airline in India, in partnership with the Tata group, all the way from his base in Kuala Lumpur. The mandarins at Rajiv Gandhi Bhavan, which houses the powerful ministry of civil aviation, were left completely stumped though. The next morning, minister Singh admitted to the morning papers that he had been kept completely in the dark.

Eventually, chairman emeritus of the Tata group Ratan Tata met Singh in the last week of February to possibly make sure the path is smooth. Tata, a keen aviator, is reportedly eager to see that the airline gets off the ground. In a conference call with journalists after the deal was announced, Fernandes joked that he was trying to get Tata to start flying the A320s, but was afraid that he may charge too much!

The Indian establishment seldom takes kindly to an iconoclast. But one thing is clear: None of his rivals are likely to underestimate Fernandes and his latest venture, AirAsia India. Most experts reckon that his entry into the Indian civil aviation market could shake up the established order. 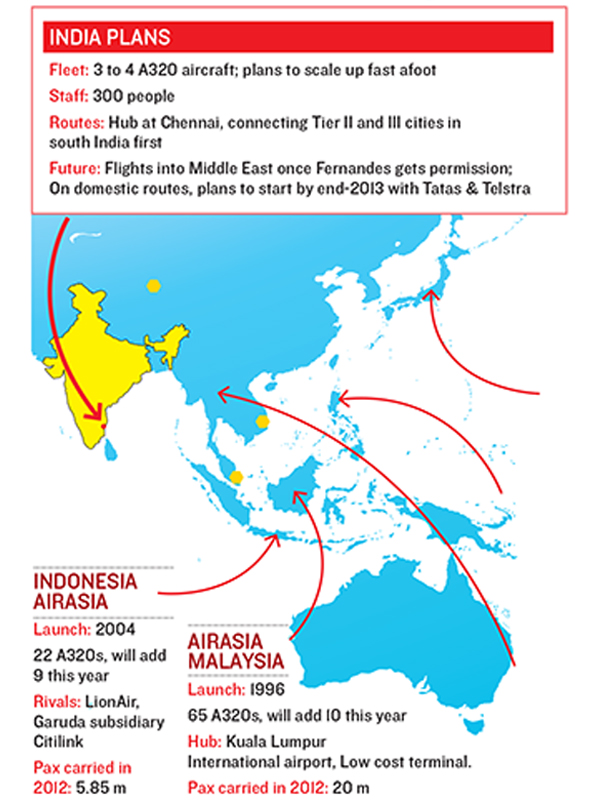 Over the past seven years, IndiGo has grown to become the country’s largest airline by market share. Rahul Bhatia, its founder, has scooped up passengers from full-service airlines like Jet Airways, Kingfisher and Air India by employing classical low-cost airline tactics: Keeping ticket prices low, focusing on delivering a reliable performance, reducing turnaround times and charging for even a sandwich. But for most part, Bhatia has concentrated on competing in the key truck routes that make up much of the existing passenger traffic.

Fernandes, on the other hand, says he will focus on getting new passengers and opening new markets. India, he reckons, is a ‘monster of an opportunity’—with a population that is 50 times that of Malaysia. He first showed that incredible skill of expansion in his home market, so much so that the tiny nation now has more airplanes than all the Indian carriers put together.

The last time that a player tried a similar strategy in the Indian skies, it met with disastrous results. Air Deccan stormed the Indian skies with its low-cost model, promoting online booking and a no-frills service. The main reason why Captain GR Gopinath faltered badly was that he spread too wide, too quickly. Deccan scaled up to 63 cities at its peak, flying with A320 as well as ATR turboprops. Now, new routes take time to mature, and airlines have to often fly for months, before they have passenger loads enough to break even. Captain Gopinath was opening up newer stations every month—even while losses mounted. Next in line, IndiGo clearly benefited from Deccan’s experience, focusing on building more flights on one city-pair, rather than expanding to new cities.

Fernandes is likely to plan his scale-up carefully, also mindful of the other challenge that Gopinath faced during his scale-up: As soon as traffic on a certain route began to gather momentum, Deccan’s rivals would typically plonk an aircraft on the same route and look to undercut him. And Gopinath soon ran out of capital.

To guard against his rivals, the wily Fernandes has, therefore, ensured that he is well-capitalised to survive a bruising price war, if that were to happen. He’s also built his business model to ensure that his is the lowest cost in the business. That way, anyone looking to undercut him, will haemorrhage more than he will. Fernandes says he and his partners plan to put in $30 million to $60 million as initial capital—something that a first-generation entrepreneur like Gopinath simply did not have. 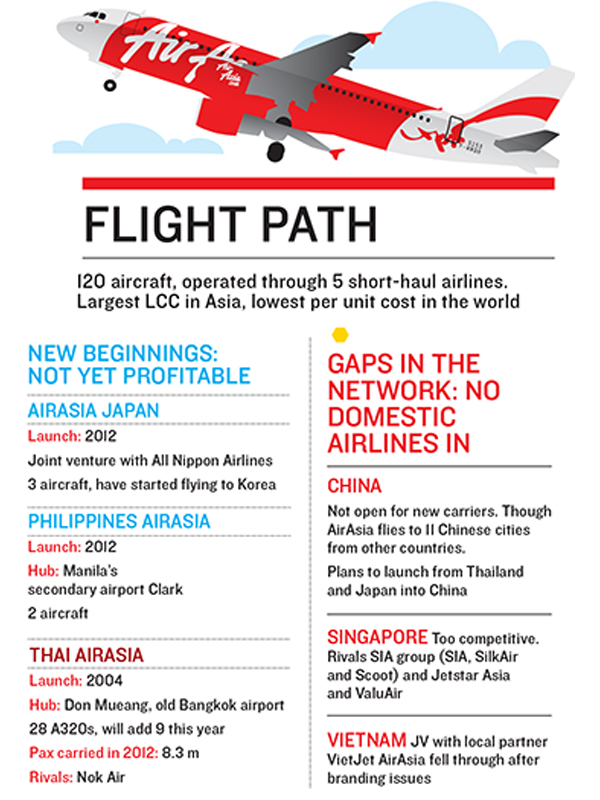 The rest of the game plan is copybook low-cost carrier (LCC) strategy and isn’t a major surprise for anyone who’s tracked his journey across Asia. He’s chosen Chennai, a relatively smaller airport, to base the airline. (A smaller airport is usually less constrained, cheaper to operate from and eager to see the advantage of a large customer.) Ryanair almost got airports and municipal authorities to pay them for flying to small cities that benefited from the passenger traffic. When AirAsia Philippines launched last year, the airline chose Clark Airbase, which is 70 km away from Manila, as opposed to flying into Manila Ninoy Aquino, the main airport.

Sadly, no one in India has been able to do it thus far. Airlines are still focussed on ‘thick’ routes connecting Mumbai, Delhi and Bangalore and there are no secondary airports. Though Indian low-cost carriers have a wide network, two-thirds of the revenues come from the big metros. In fact, the only airline that uses Chennai as a hub is express carrier Blue Dart Aviation, which operates mostly at night. AirAsia flies to Chennai, as do its rivals Tiger Airways and Silk Air.

As he scales up, Fernandes’ plan can actually be a big boost for the Airports Authority of India (AAI), which has just opened a spanking new terminal in the southern city (read about it in our Global Business Travellers’ Guide on page 102). After privatisation of the big airports, the government-owned airport company has lost its major revenue sources. It would, therefore, be only too happy to welcome an airline that plans to develop a network, which uses Chennai as the hub. There’s one other kicker: Fernandes says Indian airports are beginning to see the difference between LCC and premium business carriers. Larger airport operators like DIAL (Delhi International Airport Limited), have shown interest in building LCC terminals, he says.

AirAsia’s model depends on achieving a cost structure that is among the lowest in the world. A recent JP Morgan report compares the operating costs of listed Indian carriers with AirAsia’s on a cost/available seat kilometre (a standard measure of cost of flying a seat full or empty) basis. It shows JetLite at 7.5 cents, SpiceJet at 6.4 cents, much higher than AirAsia’s 4.4 cents. (Being a privately listed firm, there is no relative data available on IndiGo in the public domain). AirAsia’s strategy of high frequency and high turnaround of flights adds to cost efficiencies. It takes an average of 25 minutes to turn around its planes, the fastest in the Asean region. And the average aircraft utilisation is 12 block hours a day. In India, Fernandes says he will operate with an incredibly lean organisation: Just 20 employees per aircraft. Of course, passengers will have no assigned seats, frequent flyer miles or airport lounges. They also pay for every possible privilege.

AirAsia’s ancillary revenues are around 18 percent compared to Jet Airways’ 5 to 7 percent. The DGCA currently does not allow charges on many things, like check-in bags, that are now standard elsewhere in the world. Fernandes might take time to find his way around this.

As he rolled out AirAsia in various countries, Fernandes has avoided reliance on agents as much as possible. He also does not use global reservation systems, relying primarily on his website for sales. In 2012, he sold 65 percent of tickets on Airasia.com. Despite trying for 15 years, Jet Airways has been unable to increase it to beyond 10 percent. The ratio is higher for IndiGo, but India’s largest LCC still relies on agents and online travel agencies.

Call centres are used to supplement AirAsia’s sales. This has worked even in remote and technology-deprived locations in Myanmar. In the conference call with journalists, Fernandes said fares in India are not low enough. Pricing will be the pivot of his India entry and there is enormous scope for change, he said. Just how big a disruption he is likely to create in India will become evident once he launches the new airline towards the end of the year. UPDATE: The FIPB has cleared AirAsia's proposal to startup in India. However, the airline still has plenty of hoops to jump through before the first domestic flight takes off. The next important step will be to apply for an Airline Operators Licence, which is the domain of the Directorate General of Civil Aviation (DGCA). More bureaucracy is expected at every step - including deciding the number of Indian representatives on the board and indeed in the airline's senior management. Whether AirAsia Bhd's aircraft can be brought in for operation into India, a measure that would certainly be cheaper for the airline, is still unclear. Though the government has cleared the investment, AirAsia will actually have to lobby for permissions at every step.Indian carriers are used to this. They need a 'case-by-case approval' for virtually everything they do. Every new aircraft import has to be cleared individually by a committee. Mandarins also decide which airline will be allowed to fly overseas, to which city and how often.Dato Tan Sri Fernandes, Welcome aboard Incredible India.