Will the real food tech please stand up?

A handful of Silicon Valley startups are reshaping the way we define food tech, with innovations ranging from plant-based meat burgers to soil-free urban farming 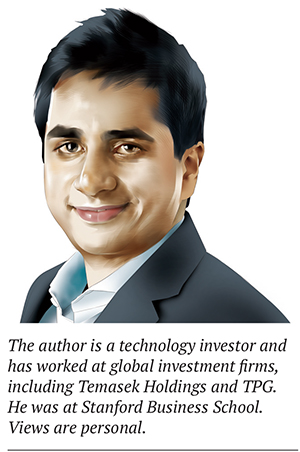 An impossible kind of food is the next big revolution in technology: And it will arrive not on your smartphone, but on your plate. Impossible Foods, a California-headquartered startup founded by Stanford biochemistry professor Patrick Brown, is firing up a slow revolution in the way the world eats. Pat’s five-year-old company creates meat burgers; minus the meat. The company’s trademark burger patty is crafted using only plant extracts. That said, it not only tastes and smells like a meat patty, but also bleeds real blood. Having created perhaps the perfect recipe for meat lovers with a conscience, the company’s mission is to disrupt the $50 trillion (around Rs 3,400 lakh crore) global meat industry, and maybe more.

In its audacious goal, Impossible Foods isn’t alone. A slew of Silicon Valley-funded startups seeking to replicate meats, eggs and cheese with plant matter is fast emerging: Be it companies such as Hampton Creek, whose eggless mayonnaise has become a bestseller at Whole Foods Market, or Beyond Meat, which makes plant-based chicken strips. These businesses are calling livestock an ‘outdated technology’ and reinventing the traditional industry norm of farming animals for meat and milk. Backed by top-tier capital from Google, Andreessen, Li Ka-shing, Khosla and Bill Gates, they are turning plants directly to meat, sparing the chicken and the cow. And they are targeting a huge market—the next generation of consumers who still love their meat and dairy, but are growing up increasingly aware of the world’s environmental challenges.

According to the United Nations, livestock rearing uses a third of the world’s landmass and produces 20 percent of all greenhouse gases. Rearing animals for meat requires supplying them with vast amounts of food—every kilogram of meat needs 5-10 kilograms of plant feed—and water—75 trillion gallons channelled towards animal farming every year. And the direct-from-plant approach means not just less wastage, but also avoids the cholesterol, antibiotics and hormones that are byproducts of eating from the traditional food chain. 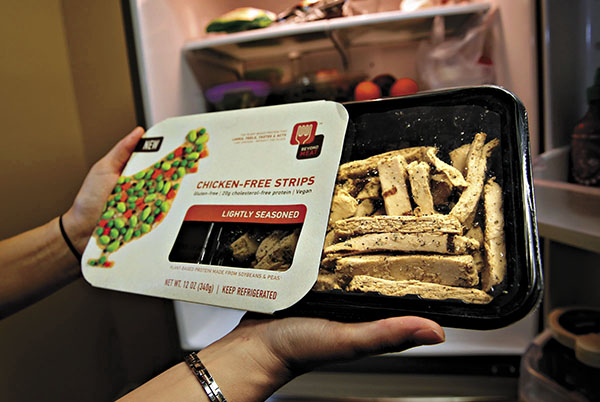 Image: Getty Images
A package of plant-based chicken strips from Beyond Meat. Companies that make plant-based meat are fervently trying to make it cheaper than real meat

But the real question remains: Will consumers pay for these new-age meat and dairy products? Aware that they are leaving behind a lower ecological footprint, would they be willing to buy a $20 plant hamburger and not a $3.99 Big Mac? Not surprisingly, the answer remains, ‘No’. If Impossible Foods wants to revolutionise the way the world produces and consumes meat, it will need to make its plant-based meat cheaper than real meat, a goal this industry is chasing fervently by marrying data scientists with biochemists to get to a $2 price tag.

The idea of a mass-market, plant-based hamburger seems so disruptive and the opportunity so big that Impossible Foods is now valued at close to $1 billion, a bold price tag for a company that’s still to achieve a full commercial launch. And Google, the world’s foremost contender for ‘moonshot’ ideas, has been eyeing an acquisition opportunity to buy them out. In fact, it even made an unsuccessful bid to buy the company in 2015.

Yet, Impossible Foods is just the tip of the future-food iceberg. Despite its transformative potential and that of other similar companies such as Hampton Creek, what they represent is a small piece of the food tech pie. Outside of the creation of new food categories, there are attempts to transform not just the way we eat, but the way we grow.
And a new crop of businesses is challenging our age-old farming practices, creating more from less and changing the face of agriculture as we know it today.

Freight Farms, a Boston-based startup founded in 2010, leads this charge. It designs and creates modified shipping containers that allow ‘anyone to grow food anywhere’, fostering the ability to pursue year-round agriculture in any environment with no dependencies whatsoever on external weather and conditions. The company, started by co-founders Jon Friedman and Brad McNamara, supplies wannabe farmers a 40’ x 8’ x 9.5’ retrofitted container, fully loaded with technology and Wi-Fi, to grow stacks of hydroponically-farmed (a method of growing plants in water, without soil) plants and vegetables.

At $80,000 a piece, the company’s product—a freight-truck-sized farm-in-a-box, with all the necessary equipment and storage required to grow produce—can yield as much produce as an acre of land, and uses 90 percent less water than a conventional soil-based farm, also replacing the need for natural sunlight with specially-designed LED strips. The box is fully insulated from the outside, thus producing the exact same crop in climates ranging from the long winters of Ontario to the sweltering heat of Texas. As a result, climate change is hardly a worry.

Beyond resource efficiency, the company is introducing a whole new wave of remote farming. Using technology, farmers can monitor and intervene real-time through a smartphone app, and every detail—such as temperature, lighting, humidity and CO2 levels—is transmitted back to the phone as well as to the company’s central servers. Just as Google becomes more powerful as more people use it, each Freight Farms owner benefits from insight gained across the network. Buyers, many of whom are first-time farmers, are trained in a two-day course and connected by a private online forum where they share everything from data on crop selection to marketing ideas.

Freight Farms also sees itself as a key driver in the urban food revolution. Away from traditional farmlands, most of their modern-day farms are parked in the interstitial spaces of cities, from warehouses and underneath highway overpasses to alleyways behind the restaurants where their crops are served. The result is truly hyperlocal produce, which sometimes travels just a few feet from farm to table. The idea is to produce fresh local produce year round.

Truly disruptive in nature, companies such as Impossible Foods, Hampton Creek and Freight Farms are all part of a rapidly expanding set of high technology food startups that are helping reshape the way the world will feed its 9 billion citizens by 2050. And there’s a whole list of them, including Cambridge-based Indigo, which is trying to develop the ideal microbiome—bacteria that live symbiotically inside plants to make them hardier and more resistant to environmental factors. These businesses have together received over $5 billion in funding in 2015.

But while these businesses epitomise food tech, they also spring up a question, far, far away for us in India. Is it food tech that we’ve been living and breathing the last two years with more online menus, deeper discounts and better food delivery, or is ours just not the real food tech?